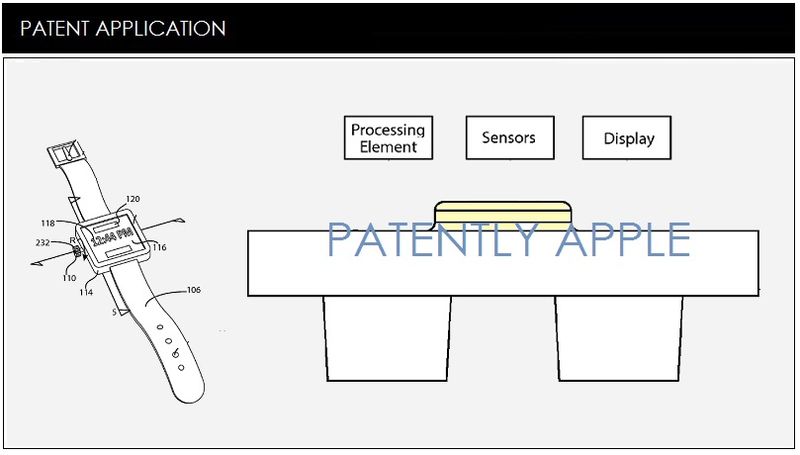 Today the U.S. Patent & Trademark Office published a patent application from Apple that reveals some of the details behind the new Apple Watch's Digital Crown. It's not warm fuzzy patent applications but rather one that's more about the mechanics of the Digital Crown. Apple notes that one aspect of the Digital Crown is made of a conductive material with one or more metals or metal alloys – which may indicate that Apple has employed liquid metal in this design. In fact another patent application surfaced today regarding the manufacture of "thin walled enclosures" which uses a metal that goes from a liquid phase to that of a solid phase which would be a direct reference to a liquid metal process. The patent drawings in that second patent filing point to an iPhone-like device using the new thin walled technique though could be applied to Apple Watch as well.

Many types of electronic devices, such as smart phones, gaming devices, computers, watches, and the like, use input devices, such as buttons or switches, to receive user input. However, many input devices, such as buttons or switches, may allow only a single type of input. For example, a button may only transmit one type of signal, which is a compression of a button that completes a circuit. As electronic devices reduce in size, it may be desirable to have fewer input buttons or devices, without reducing functionality or the number of input types that can be used by a user to provide information to a device. Further, in instances where the button or switch may be movable or rotatable, the button may not be able to include a sensor or other electronic element that requires data and/or power to be transferred between the button and one or more components of the electronic device, as the movement may make an electrical connection difficult.

The input module referred to and described in this patent filing relates to the Apple Watch's "Digital Crown." Apple notes that "the tactile switch assembly may include a button that forms a crown for the watch and is connected to a sidewall of an enclosure for the device." 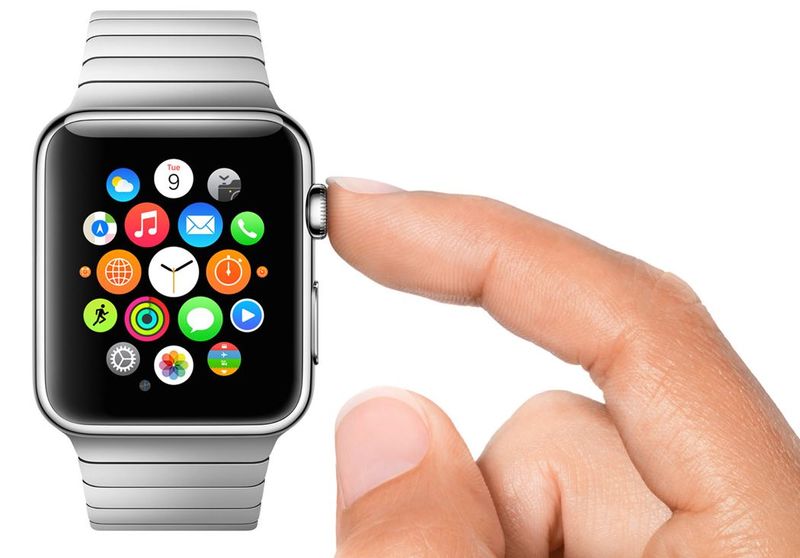 Apple notes in their patent filing conclusion that "although the input button may be discussed with respect to a crown for a watch, the devices and techniques disclosed herein are equally applicable to other types of input button structures." 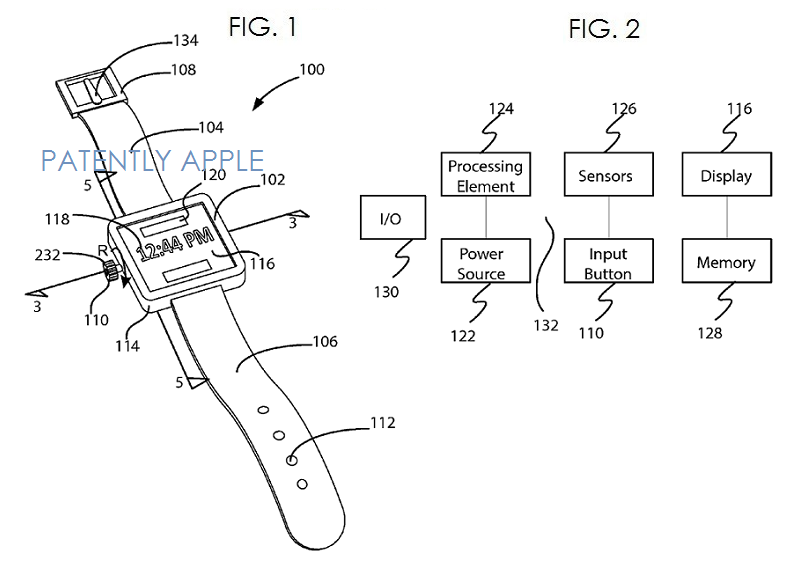 In Apple's patent FIG. 3 we're able to see that a button (#148) forms a user interface for the tactile switch assembly (#110) and extends outwardly from the enclosure (#114). 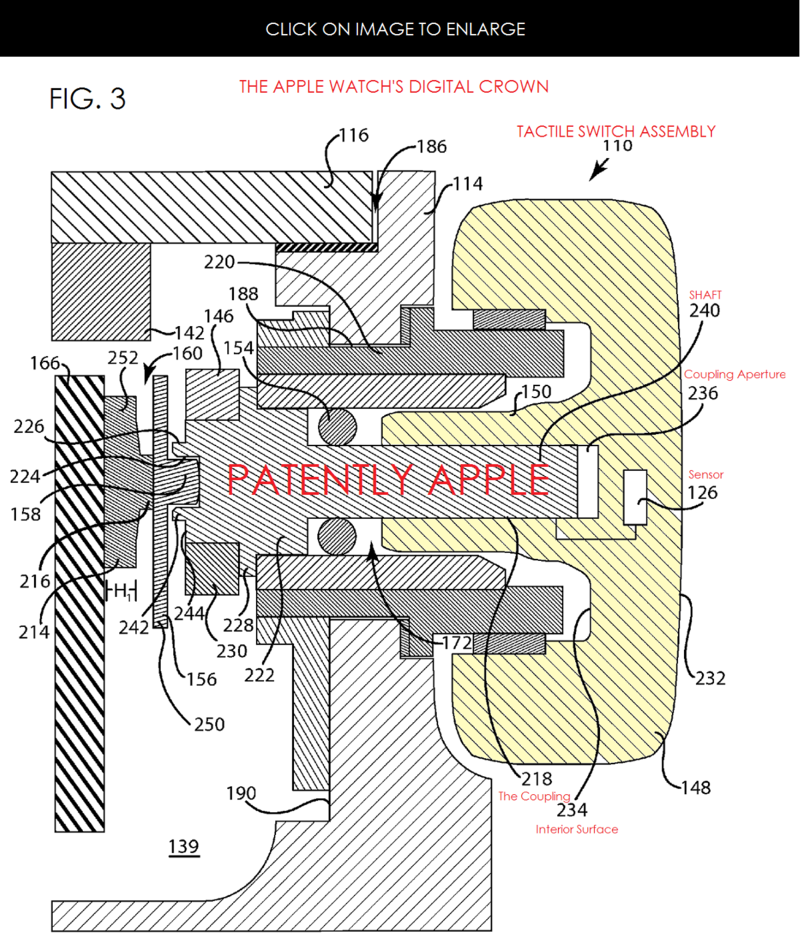 The Dome: The tactile switch (#214 above) may include a nub (#216) and a collapsible dome (#252). The nub interacts with a contact element on an interior of the dome (#252) to indicate when the switch sensor (#160) has been activated. The dome is a resilient and flexible material that collapses or flexes upon a predetermined force level and returns to its original shape when a force is removed. The dome may be a thin metal dome, a plastic dome, or other may be constructed from other materials. The dome may produce an audible sound, as well as an opposing force, in response to a collapsing force exerted by a user. The audible sound and opposing force provide feedback to a user when a user compresses the dome. The nub is connected to the dome and when a force is applied to the nub, the nub collapses the dome.

Physiological Sensor: Apple notes here that in some embodiments, the tactile switch assembly optionally may be used as a physiological sensor, although this functionality may be omitted from certain embodiments.

For example, in one embodiment, the enclosure may be electrically conductive and when worn by a user may be in communication with the user's skin. With reference to FIG. 3, in this embodiment the sleeve #220 may be an insulating material, such as rubber, plastic, or the like, and isolates the button #148, stem #150, and coupling #218 from the conductive housing.

To measure one or more characteristics of the user's heart, such as by an electrocardiograph (ECG), the user may press his or her finger on the button. In this example, the wearable device may be worn around a user wrist and the finger placed on the button may be from the opposite arm as the arm wearing the device. The connection between the user's finger and the head (#148) may act as a first lead for the ECG and the connection between the user's wrist (or other portion of the arm) may act as the second lead for the ECG.

Apple notes that as the user places their finger on the button, an electrical connection via the coupling and electrical contact (#158) allows for a second reference point. In this manner, voltage signals detected at the first location can be compared with voltage signals detected at the second location and subtracted to detect rise and falls between the two signals. These rise and falls can be correlated to the rhythm of a user's heart. Additionally, in some embodiments, the device may use one of the connections to the user's skin to send a pulse or signal through the user in order to measure the ECG characteristics of the user's heart.

Apple credits Colin Ely as the sole inventor of patent application 20150041289 which was originally filed in Q3 2014.