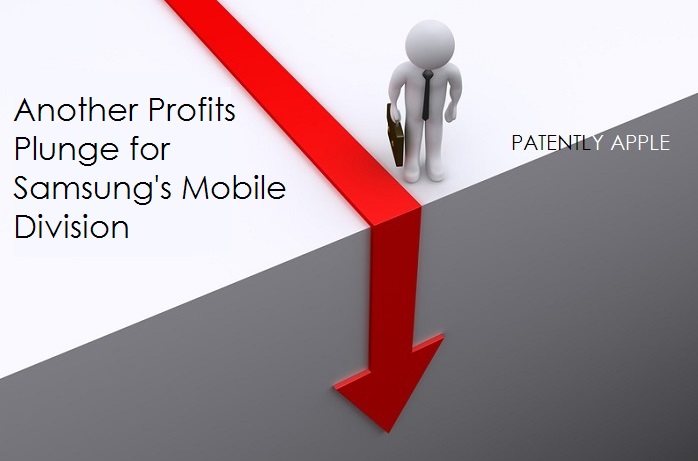 As Apple's historic holiday revenues announcement is still reverberating throughout the tech sector, the flipside of that monster quarter has led to yet another profits crash for South Korea's Samsung. In October we posted a report titled "It's Official, Samsung Profits Plunge 60% with Q4 Looking Dismal Due to iPhone 6 Mania." Today Samsung has announced their Q4 numbers and their mobile division's profits fell like a rock against Apple's iPhone 6. Though in Samsung's total report, profits were slightly up in contrast to their last quarter, though not year-over-year.

The South Korean giant reported that earnings from smartphones and other mobile gadgets dropped 64 percent annually in the October-December period to 1.96 trillion won (U.S.$1.80 billion), contributing to its first annual earnings fall in three years.

It was the mobile division's fifth consecutive quarter of decline, in contrast to Apple's record-breaking 74.5 million iPhone sales in the three months to Dec 27 on the back of the success of its big-screen iPhone 6 and 6 Plus, reports Reuters.

In addition, Asian based market researcher Counterpoint released a report earlier today stating that "Apple smartphone shipments rose to a record high as it became the largest smartphone brand on the planet and second largest mobile phone supplier globally for the first time ever surpassing Samsung & Microsoft (Nokia) respectively." Yet later in their report they noted that "this lead by Apple in smartphone segment is temporary," without quantifying that statement.

Also published today are two reports from Strategy Analytics. Their first report is titled "Apple Becomes World's Largest Smartphone Vendor in Q4 2014" wherein they note that "Apple's new iPhone 6 and 6 Plus models are proving wildly popular in China, United States and Europe. Apple tied with Samsung to become the world's largest smartphone vendor for the first time since Q4 2011.

Their second report is titled "Apple Becomes the World's Second Largest Mobile Phone Vendor in Q4 2014." This must have been published to appease Samsung because Apple really only sells smartphones.

Did Someone Switch the Channel?

While Reuters, Bloomberg and others are reporting Samsung's disastrous quarter, in South Korea it's like they're watching a different TV show and aren't even on the same channel.

Was the U.S. press only reporting on a segment of Samsung's earnings, as in their mobile division, or is the South Korean press living in a protective bubble?

Going back to the Reuters report, the drop in profits was in context with Samsung's mobile division. So it appears the reporting has been selective. However, in the bigger picture, it's the mobile division that really matters in the smartphone and tablet wars. The Korean press chose not to touch that segment of Samsung's earnings report with a ten foot pole.