According to a court document obtained by Patently Apple, Rosetta Wireless is claiming that their granted patent 7,149,511 titled "Wireless Intelligent Personal Server has been infringed upon by Apple in their iPhone's starting with the iPhone 5 specifically. 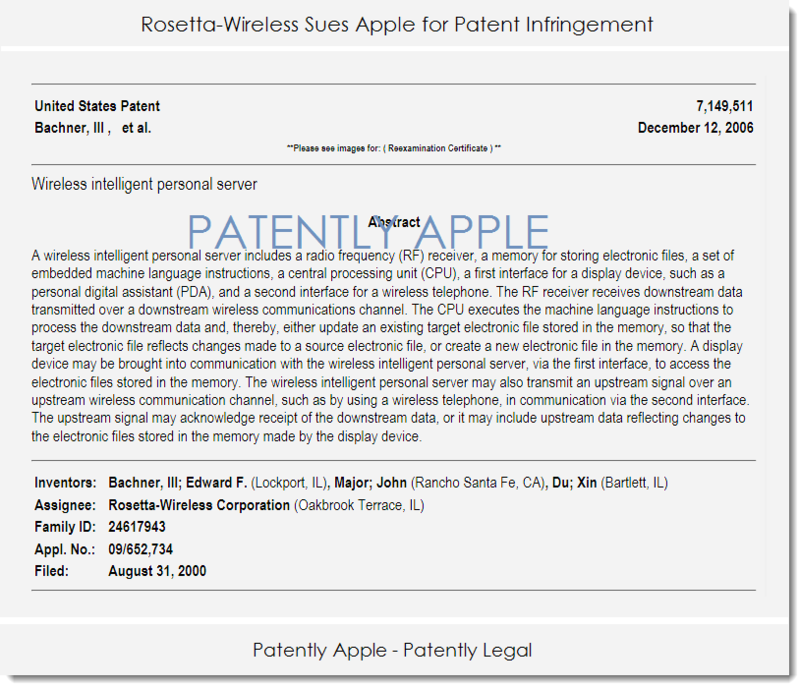 In Exhibit B filed with the court, we're able to see the number of iPhones that allegedly infringe upon the Rosetta Wireless patent.

The patent infringement lawsuit, at this stage in the process, doesn't provide us with any specifics as to how Apple's iPhone's are infringing the Rosetta Wireless patent. They simply filed a general overview as noted below:

"Upon information and belief, Defendants have infringed directly and indirectly, and continue to infringe directly and indirectly the '511 Patent. The infringing acts include, but are not limited to, the manufacture, use, sale, or offer for sale within the United States, or the importation into the United States of products that embody the patented invention, including the products listed for each Defendant in the attached Exhibit B. Defendants are liable for infringement of the '511 Patent pursuant to 35 U.S.C. § 271.

The acts of infringement by Defendants have caused damage to Rosetta, and Rosetta is entitled to recover from Defendants the damages sustained by Rosetta as a result of Defendants' wrongful acts in an amount subject to proof at trial."

The other defendants listed in this patent infringement lawsuit include Samsung, LG, HTC and Motorola. There are well over 100 Samsung Galaxy mobile phone models listed, over 50 HTC models, 80 LG models and over 30 Motorola models.

Rosetta Wireless is asking the court for a declaration that the Defendants, and each of them, have infringed and are infringing the '511 Patent; wants an injunction against the Defendants' continuing infringement; and an award of damages to Rosetta arising out of Defendants' infringement of the '511 Patent, including enhanced damages pursuant to 35 U.S.C. § 284, together with prejudgment and post-judgment interest, in an amount according to proof.

The patent infringement case presented in today's report was filed in the Illinois Northern District Court, Chicago Office. The Presiding Judge in this case is noted as being Judge Sara L. Ellis.