The two patents that are listed in Hall Data Synch Technologies (HDST) complaint before the court include patent numbers 6,539,401 titled "System for Facilitating Home Construction and Sales" and patent 7,685,506 titled "System and Method for Synchronizing Data between a Plurality of Databases." 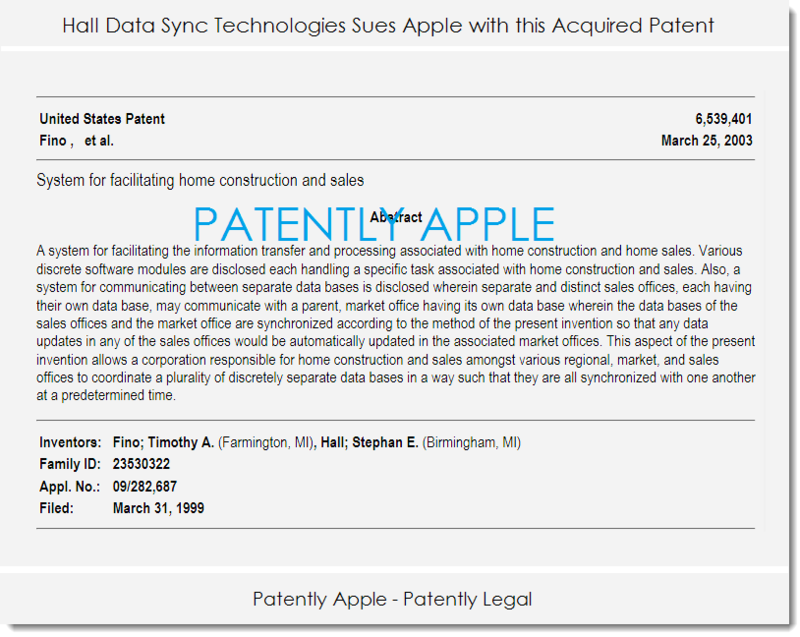 The heart of HDST's case states that "Upon information and belief, Defendant has been and is now infringing the '401Patent in the State of Texas, in this Judicial District, and elsewhere in the United States, by, among other things, directly or through intermediaries, making, using, importing, providing, supplying, distributing, selling, and/or offering for sale apparatuses and systems (including, without limitation, iCloud for iPhone, iPad, iPod Touch, Mac, and Windows PC) that provide a method for synchronizing information among a plurality of databases, retrieving information altering the data stored in one database, determining which portion of data has been altered, transferring only the altered portion of the data to the other databases, and modifying the other databases based on the altered portion of the data, covered by one or more claims of the '401Patent to the injury of HDST."

HDST's complaint is repeated for the '506 patent noted above. As with all patent trolls, HDST is seeking a life-long royalty for their acquired patents. For the record, HDST has filed similar lawsuits in recent days against Google, SugarSync and Box Inc.

The patent infringement case presented in today's report was filed in the Texas Eastern District Court. At present, no Judge has been assigned to case number 2:2015cv00006.

Patently Apple presents only a brief summary of certain legal cases/ lawsuits which are part of the public record for journalistic news purposes. Readers are cautioned that Patently Apple does not offer a legal opinion on the merit of the case. A lawyer should be consulted for any further details or analysis. See our Legal Archives for other patent infringement cases.