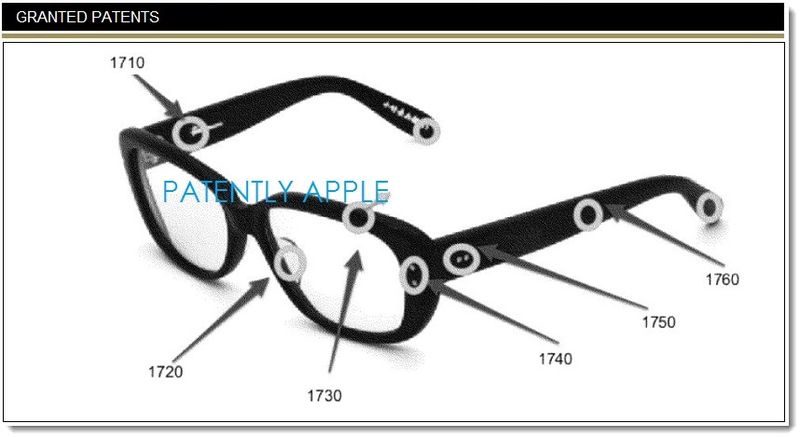 The US Patent and Trademark Office officially published a series of 28 newly granted patents for Apple Inc. today. About a year ago Apple acquired BroadMap and today we cover one of their inventions relating to lifestreaming and smart-glasses that could record important events and life's greater moments, naturally. Lifestreaming is also a project that Microsoft is working on. We covered their patent here. In that report we also showed a picture of a pair of real smart-glasses with its circuitry built into the side frames. Microsoft also has a few trademarks related to the project, like this one. Will Apple decide to join the race to this new market segment? Only time will tell.

Apple's newly granted patent covers their invention relating to online social media. More particularly, the present invention relates to collecting and enriching information. Apple's acquired patent has at least two surprises covering a possible new device in the form of lifestreaming smart glasses and the use of Xen Hypervisor.

Today, a tremendous number of online services and applications are available. The existing online services are related to virtually every aspect of life, including work, relationships, health, entertainment, news, etc. Access to these online services typically only requires an Internet connection. However, the abundance of services also causes information overload. As a result, disorganized information is floating around many users' lives and brains. Instead of positively influencing our lives, the services become cumbersome and are often neglected. In particular, the advent of social media has made it easier to share information with more people and make connections with people who we otherwise would not. However, the ubiquity of social media (such as through social networks) has created a further explosion in the information content of our lives and relationships. This information clutter reduces a user's productivity and shortens the user's attention span.

Typically, ideas begin with private thoughts that are later refined and shared to friends and, perhaps, the public at large. Who these ideas are to be shared with often evolve over time. Existing online services are not amenable to this process of developing ideas and deciding where to share them at a later time. For example, existing social media forces ideas immediately into the public domain. Information or media posted on social networks (e.g. Facebook.com, Twitter.com, and Flickr.com) or blogs (e.g. Wordpress.com and Blogger.com) are immediately accessible by other users. To post information in existing social media requires upfront cognitive decision-making related to the audience level of the information at the time the information was collected or generated. This process does not match the way human brains function.

The present invention addresses at least the above-described difficult problems and advances the art with a semantic note taking system and method.

The surprising element to this invention was buried deep in the patent filing relating to lifestreaming smart glasses. 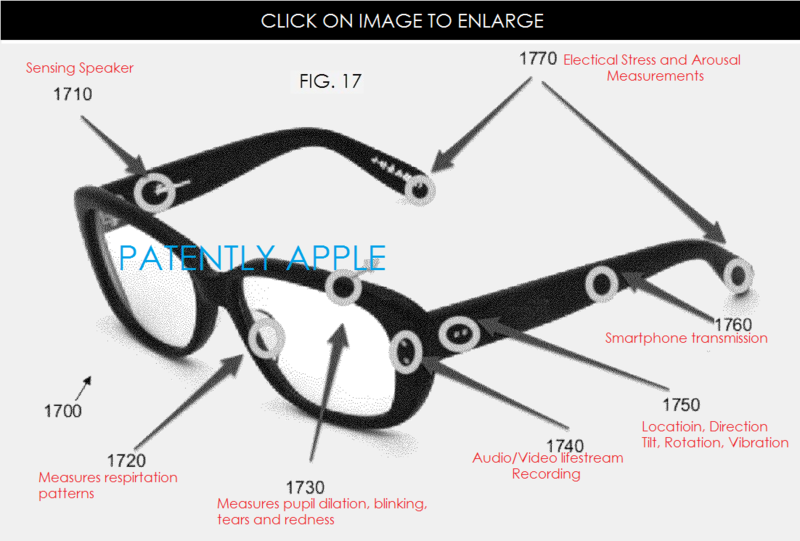 Apple further notes that externally-sensed "annotation data elements" pertains for example to direction, location, identity of person or place the user is looking at. Facial recognition software, voice recognition software, GPS tracking software or devices, semantic analysis software, software for analysis of timing of events or speech, directional or motion analysis software, stress indicators or voice tone analysis software, intentional indicators or software (start, stop, etc.) or the like could be used for context sensing or changes in context. One or more externally sensed annotation data elements could be automatically derived by the computer device, the computer or application server or an online service based on context sensing or sensing changes in context in the externally sensed data.

A Wine Review: Apple starts off their example section with something most working adults will appreciate, fine wines and wine review note system. Apple notes that a user enjoys a product, such as a glass of wine. During a dinner engagement the user jots down information related to the wine, such as the brand, vintage, variety, etc., by accessing a user interface to the semantic note taking system.

Health Related: The present invention can be directed to a dietary, health, or medical service. For example, with minimal friction, a user can submit his or her dietary behavior to be tracked by a diet service. In another example, medical information can be collected at a hospital visit or doctor's appointment and submitted to an electronic medical record (EMR) application.

Research Related: The semantic note taking system of the present invention can also be applied to a research study. In an embodiment of the present invention, research data is collected in a note. The research data can be collected from the field via a mobile device. The research data is enriched with time and location context traits. For repetitive data collection, a semantic skin would provide simple one click user entry of data. For example, the present invention can facilitate frictionless data gathering from door-to-door surveys. A door-to-door surveyor would need not enter the address of each participant of the survey as location context traits would be automatically associated with the note. Relevant data (e.g. resident names and demographics) can be automatically accessed based on the location context traits. 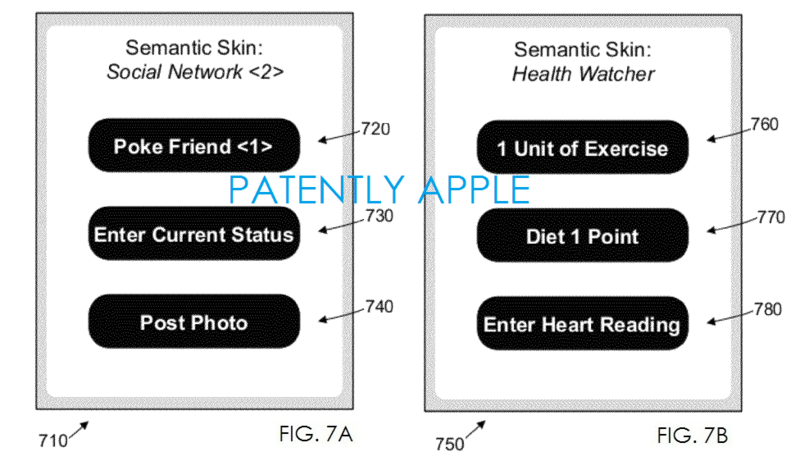 Apple's patent FIGS 12A and 12B presented below show us examples of using semantic note taking with online retailers. 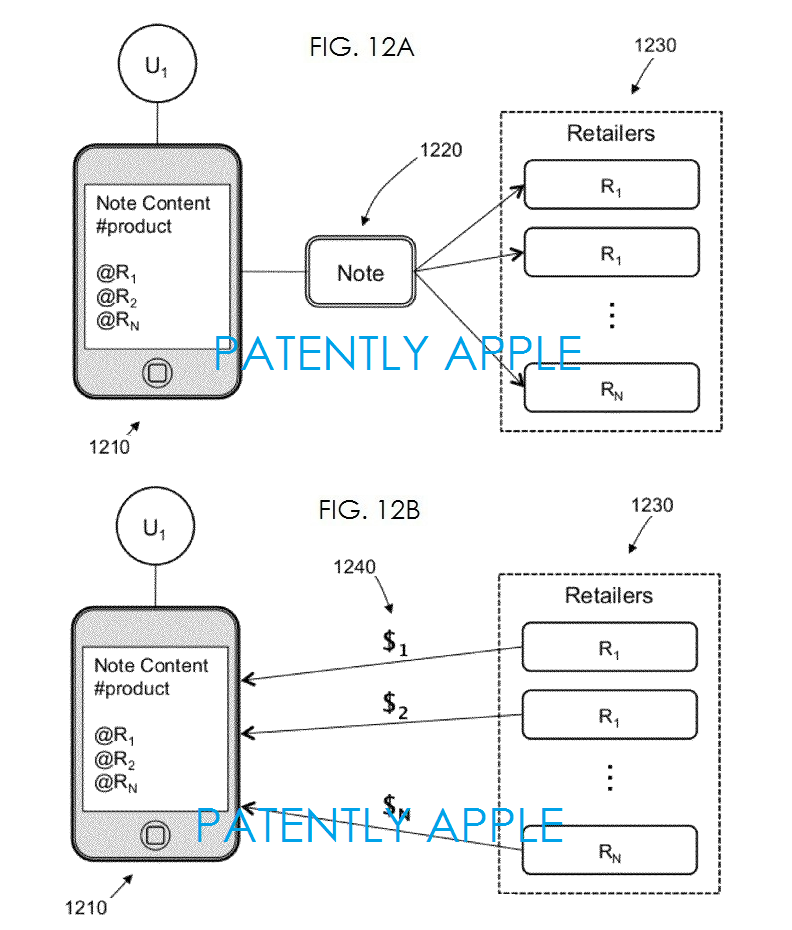 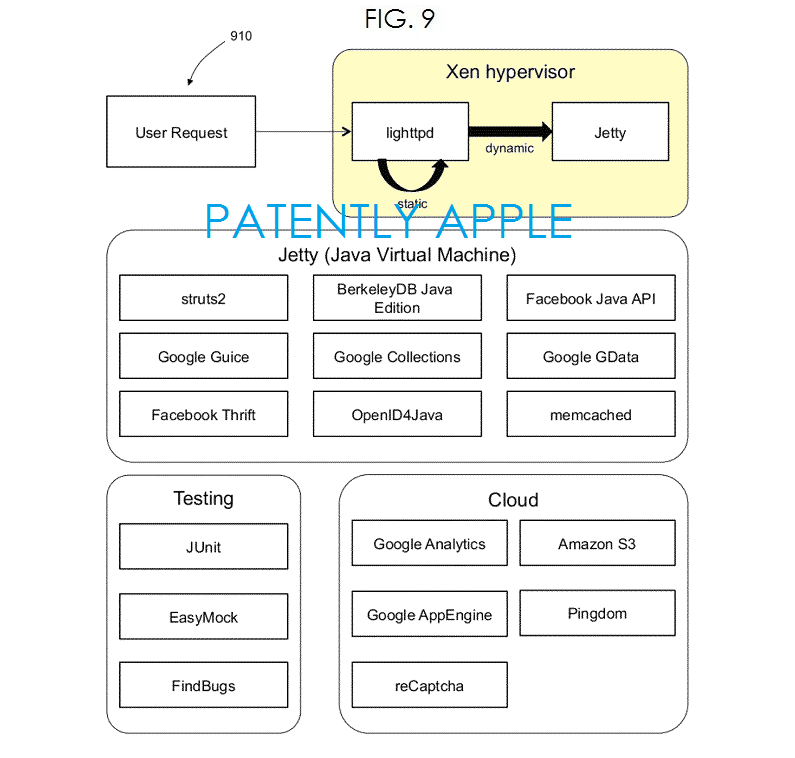 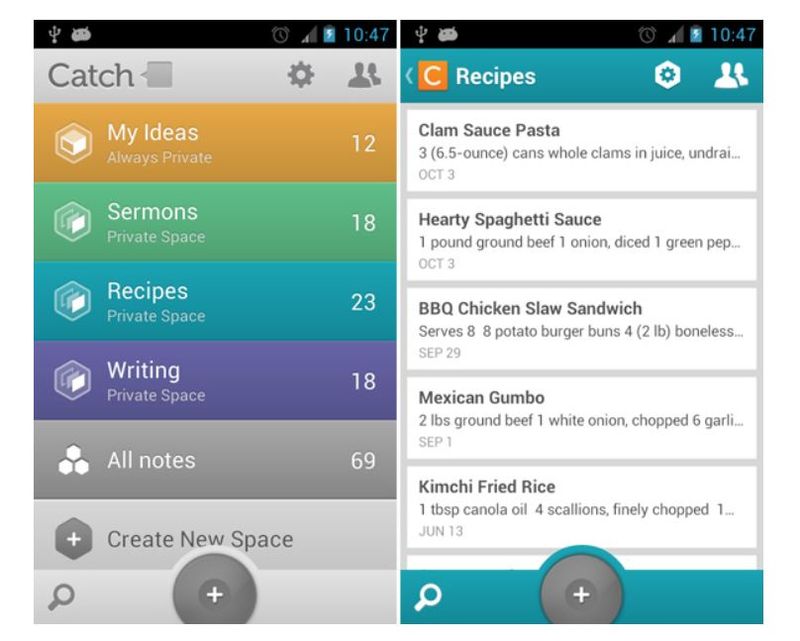 Business Insider named Catch one of the top productivity apps of 2012. The Catch app may or may not be a part of the lifestreaming system that is found in today's granted patent.

Apple credits Andreas Schobel former co-founder of BroadMap Note-taking app, and Stephen Brown as the inventors of granted patent 8,930,490 which was originally filed in Q1 2012 and published today by the US Patent and Trademark Office.