Xiaomi, the World’s Fastest-Growing Smartphone Company Earned Under 2% Profit Margin in 2013, by Design

Last week we reported that the Indian High Court banned Xiaomi smartphones for infringing Ericsson's patents. Every smartphone company could sell their phones a little cheaper if they didn't have to pay for of the Standard, Essential Patents that make up a standard smartphone. But the advances in smartphones that we enjoy today are based on patented technology that makes each phone work properly. Xiaomi's big move outside China is now in trouble for trying to skip on paying royalties. This is an interesting case considering that we just learned that Xiaomi only made 1.8% profit margin in 2013 according to a recent Reuters report. Paying royalties will force higher pricing and Ericsson may only be the first of many to follow that will force patent issues abroad. You could be sure that Samsung will be challenging Xiaomi, as Samsung's sales of smartphones have plummeted due in large part to Xiaomi winning the low and mid-level markets they once had. But Xiaomi isn't sweating it out. They'll figure it out and still march on around the globe swallowing markets whole because of their philosophy that most are missing.

Forrester Research analyst Bryan Wang recently commented about Xiaomi by stating that "They're growing so fast and so lean, I wouldn't be surprised even if they were losing money." 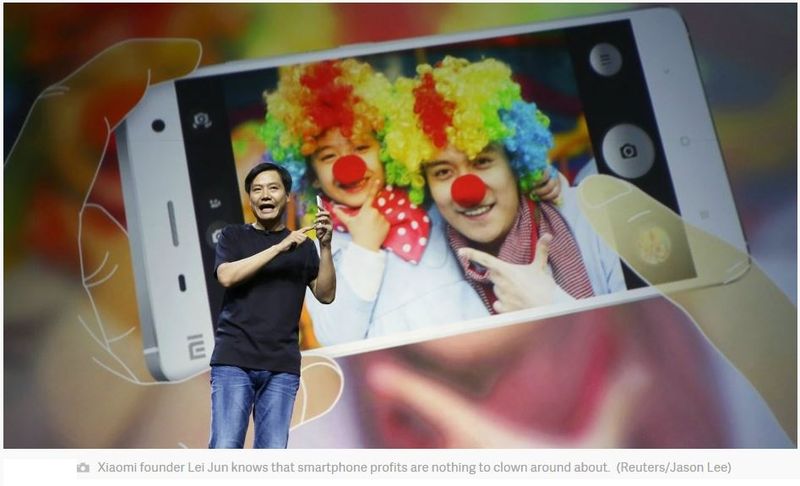 According to Reuters, Apple's operating margin was 28.7% for the business year ended September 2013, Samsung at 18.7%. So in context, Xiaomi's razor thin 1.8% margin has no room for error.

Reuters' findings were based on a regulatory filing, which Xiaomi confirmed was accurate. Juxtapose that with the Wall Street Journal's figure that Xiaomi profits totaled $566 million, or 10x the actual numbers found in the regulatory filing and there's a huge problem. Why? The Wall Street Journal reportedly relied on a document given to bankers by Xiaomi in their bid to raise expansion funding. If true, they fraudulently presented their finances which could be a huge problem for the bank and Xiaomi in the future if regulators investigate this.

Yet with that aside, it shouldn't come as a shock to anyone that Xiaomi's profit margins are so low. Last year during D Conference with Walt Mossberg, Xiaomi co-founder and president Bin Lin discussed the company's driving philosophy: Building a business on services by selling mid to high-end smartphones at cost.

Lin stated that "We believe the future of the mobile Internet is really about services. Cellphones are really just like PCs were 20 years ago. They generated big profit margins in the beginning. But those margins are in the single digits now. The same thing is beginning to happen to smartphones. So rather than focus on devices where margins will decline, we're focusing on services." That's been their game plan from day one.

In October during Apple's financial Conference we noted that "starting in Q1 2015 they'll be breaking down its sales in different categories. As always Apple will have segments for the iPhone, Macs and iPad, but will introduce "services" and "other products."

In July during another financial conference, Apple's CEO Cook noted that "We're very bullish about the future of the tablet market and we're confident that we could continue to bring significant innovation to this category through hardware, software and services."

Apple will continue to lead the industry in profit margins while introducing more services going forward to fuel profits. Apple Pay was introduced in Apple's first Quarter of the year (calendar Q4) and profits from that will fall into the new services category. Cook has mentioned services several other times in statements without expanding on what that will entail. Yet Apple is fully aware of the need to expand services in the years ahead and we're likely to see part of Apple's plan on that front expand in 2015.

While some see Xiaomi's business model as a threat to Apple, it is by far a threat to Samsung in the short term as they have failed to deliver any meaningful services to date in music or anything else. Most Android services come from Google Play.

For 2015, Xiaomi is aiming for India, Brazil, according to The New York Times, and selling services like entertainment is a part of their strategy. It was reported last week that Xiaomi invested in Baidu online video business that will be integrated into future Xiaomi phones and smart TV.

Xiaomi's business model of selling phones at cost in the hopes of raking in future profits from services is rocking the market in China today and could possibly threaten most markets where Samsung sells into today.

Xiaomi's business philosophy revealed during the D-Conference is the nothing more than the old "razor and blades business model." So while most news outlets are making the story only about Xiaomi's dangerously low profit margins, Xiaomi is laughing because this has been their plan all along.