T-Mobile's CEO John Legere didn't mince his words about the fabled Bendgate back in October. To him it was all a bunch of Horse sh*t, to mark his words. He's definitely outspoken and an in-your- face type of CEO. Today Legere is stepping up his war cry by calling 2015 as he sees it. He steps on his competitors while talking a little about Apple in between punches.

According to the doctrine of T-Mobile's CEO, "The wireless revolution has not only been sparked, it's become a movement – and it's not slowing down, it's speeding up....to warp speed." Here are a few of his key points:

The most recent phablet stats from Flurry showed phablets took a huge leap in Q4 2014 and of course with Apple's iPhone 6 Plus leading the way, Legere's view of it skyrocketing sounds about right, though it might not get to the 50% mark in 2015. That would be a bit of surprise if it did.

In the end, you could check out T-Mobile's crafted Propaganda Chart of benefits below which lists their perceived advantages over their competitors. I'm sure that some in the industry would disagree with this chart, but it's part of Legere's Sermon on the Mount for the coming year and so take it for what it is. Legere carefully crafted a winning hand for his company with this chart. Whether their advantage chart reflects reality is up to you to carefully check out. 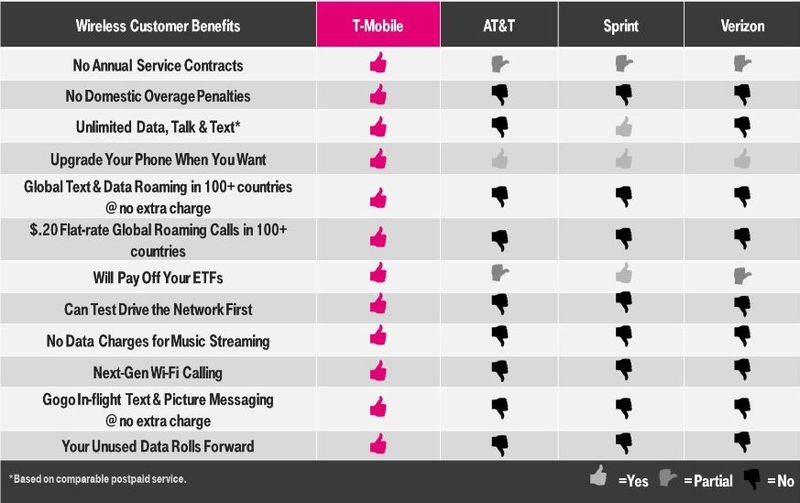