A year ago Apple added the camera function known as Burst mode to iOS 7. At the top of the year Apple acquired a one-man photo technology startup called "SnappyLabs," which specialized in a camera app for burst mode capture. Today, Apple's Burst Mode patent filing comes to light. (Click on our cover graphic to enlarge the image.)

With the advent of digital photography, a person no longer has to buy film to take pictures. In addition, the person does not have to take the film to a film developer, wait some time to have it processed, and then return to the developer to finally look at the finished pictures. Nowadays, a person can just snap a picture with a digital camera and look at the picture. If the person does not like the picture, he or she can take another one. Also, people can take pictures with all kinds of devices. Examples of such devices include digital cameras, smart phones, tablets, laptops, etc.

The problem today is not so much about the convenience in taking pictures or the wait to have the pictures ready. Rather, it is more and more about taking too many pictures. A person can have hundreds or thousands of pictures taken, however, sorting through those pictures and finding a few pictures that the person actually likes is a lengthy process. This problem may get even worse because many devices are now supporting a continuous high-speed shooting mode. In this burst mode, a camera takes many still shots (e.g., tens or hundreds of shots) in one quick succession.

An easy solution to sorting through the vast number of pictures is to delete some or most of the pictures. However, people change their minds all the time on what constitutes representative pictures. Therefore, deleting the undesired pictures at one time may subsequently lead to loss of potentially desired pictures at another time. Another solution is to organize the pictures into different albums, but this solution requires a lot of time and effort, and yet at the end it could be very hard to remember which pictures are in which albums.

The image editing application of some embodiments designates an image in a group of images as dominant or non-dominant regardless of whether the group is a burst mode sequence. For instance, a user may classify an image that belongs to a collection (e.g., a camera roll) as the dominant image of the collection. The collection then will be represented by the dominant image. In some embodiments, the user may classify not only images that belong to different groups, but also the groups themselves. For instance, the user may classify a group of images, amongst several other groups of images, as a dominant group. All different groups of images will then be represented by the dominant group.

The method of some embodiments presents a single composite image (thumbnail or larger sized image) to represent multiple images that are captured from an action sequence in a single burst mode. One example of such an action sequence is a diver diving into a pool. The action sequence might include (1) the diver standing at the podium, (2) the diver in the air, (3) the diver entering the water, and (4) the diver re-appearing on the surface of the water. For such a sequence, the method might generate a single composite image that is created by blending together one image of the diver in each of the four stages of the action. In selecting images for the composite representation, the method of some embodiments takes into account whether the images are dominant or non-dominant images.

Apple's patent FIG. 8 provides an illustrative example of presenting pictures in a burst mode sequence as a series of shapes. 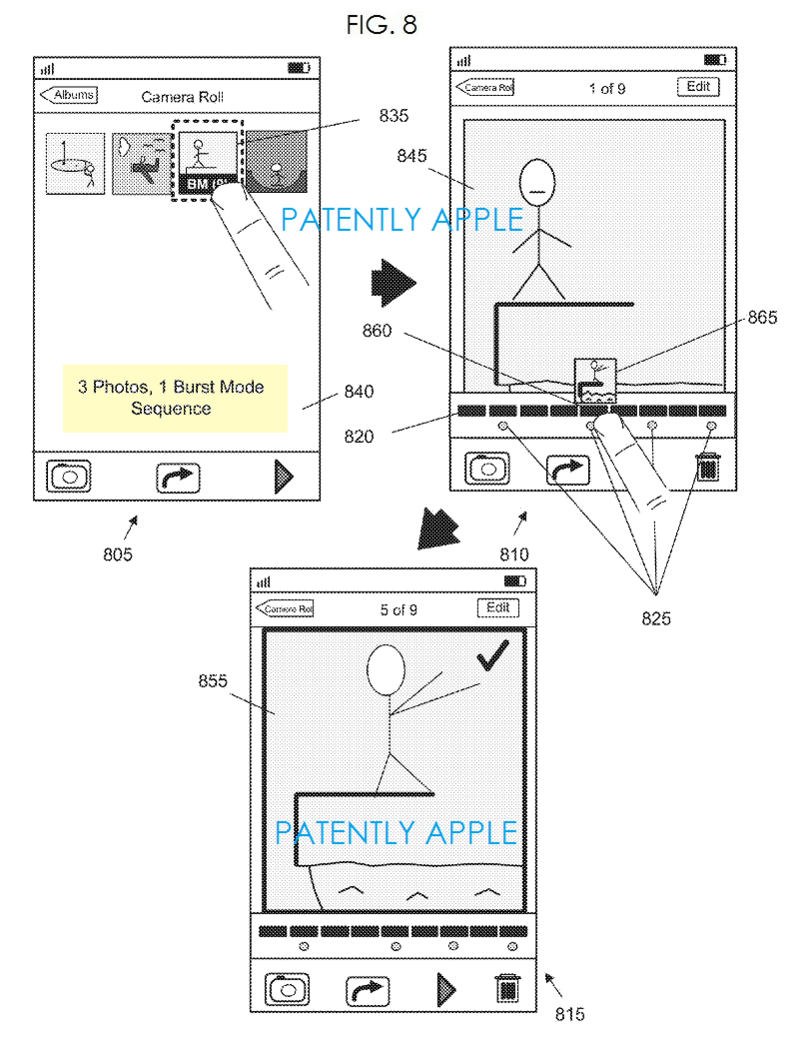 Apple also notes that "This figure also illustrates an operating system 2625 that includes an image capture framework 2630 for capturing and storing pictures and videos, and user-interaction components 2635 for detecting user input such as touch input, voice input and receiving voice commands. That would suggest that at some point in time camera features may be tied into Siri.

For camera buffs wanting to dive into all of the details of this invention can do by review Apple's patent application 20140354845.