NY Apple Store Stage for Over the Top Die-In Protests Popular, well-known sites, such as the Apple Store on Fifth Avenue, Times Square, Macy's and the area around the Rockefeller Center Christmas Tree, were caught up in Friday's "die in" protests. Demonstrators angry over a grand jury's decision not to indict a policeman in the death of an unarmed African-American man, Eric Garner, converged on Friday on some of New York City's most famous businesses and venues.

It was a third night of protests since the grand jury's decision on Wednesday. Mr. Garner died in July after an apparent chokehold applied by a New York Police Department officer, an incident captured on video and viewed widely on the Internet.

"We're sending a message to corporate America. No one wants us coming in and ruining the flow; especially during the holiday season. The Wall Street Journal (WSJ) quoted Peter Perez, a protester in the Apple Store as saying "They better give us something." 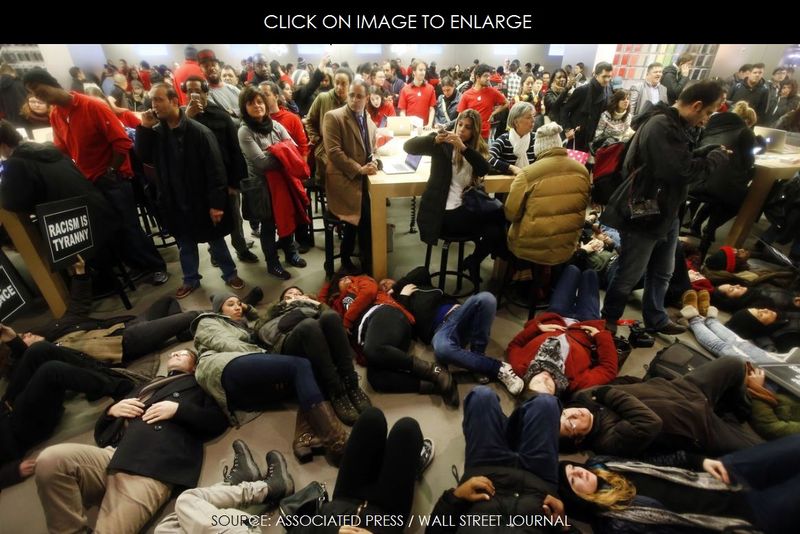 A group of at least 50 people merged with crowds of tourists looking at the Rockefeller Center Christmas Tree, yelling "Hands up, don't shoot." That chant was made famous after some witnesses said black teenager Michael Brown's hands were up before a police officer fatally shot him in Ferguson, Mo. A grand jury declined to indict the officer, Darren Wilson, two weeks ago, spawning a wave protests around the country.

Yet that account was highly disputed and the officer in that case was responding to a robbery call where Brown had just robbed a store as noted in the photo below. The video shows that Brown and his friends simply walked into this convenient store, stole cigars and then roughed up the store attendant who was trying to rightfully stop Brown. The officer didn't just decide out-of-the-blue to stop, harass and kill Brown. 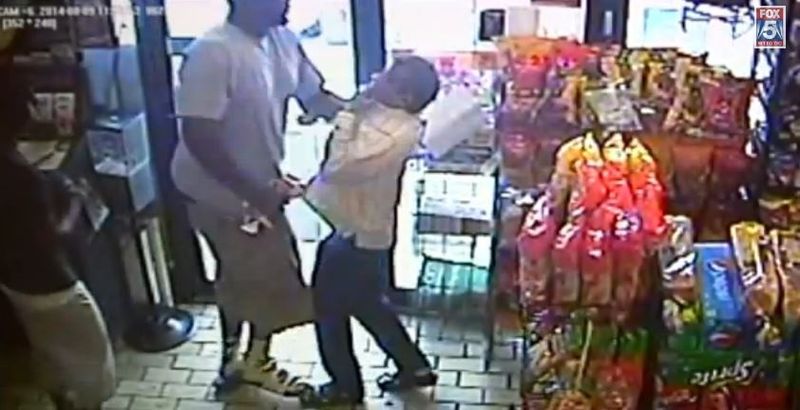 This was the wrong case for civil rights leaders to protest about as accounts had Brown assaulting the police officer prior to the shooting. The black community were attempting to make Brown out to be this mild mannered individual who did nothing to warrant the officer from trying to stop and question him. This was before the video was made public showing us the real context as to why the officer was trying to stop Brown. It's as if a certain faction within the black community had been waiting for any case to set off a new round of protests in America.

A new headline today throws fuel on the fire. The headline reads: "It's Not Just the Cops—Racism Is a Problem for the Secret Service, Too." So instantly the argument leapt to racism across America. In recent days and weeks Jesse Jackson was once again stirring things up at Apple and Microsoft. Even though 39% of Microsoft's work force is non-Caucasian, that's apparently not good enough for Jackson.

Prior to the last elections in the U.S., the GOP had tried to make voting harder for blacks and minorities by requiring photo ID and other documentation to supress the vote. Where were the righteous mass protests then? The great thing about Martin Luther King was that he understood that meaningful protests have to be about the bigger picture on race and that choosing the right cause to rally around would gain support in North American and around the globe.

But when you see signs stating "White Supremacy" in large numbers in a crowd, it just crosses a line and gets Caucasians angry. Then the rightful protest goes from a single focused anger point to a mesh of confusion over race in a flash. 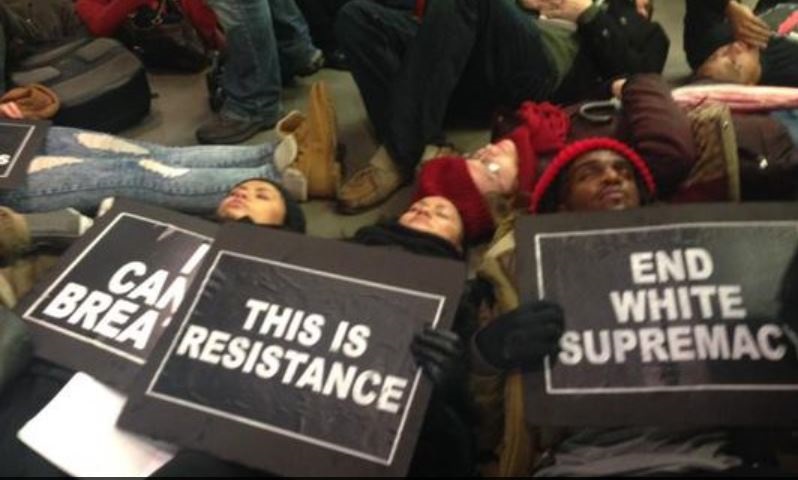 Leaping from a few controversial cases to a calling for the end of white supremacy is too large a leap. Everyone has the right to protest and everyone can understand that. But once it turns into burning businesses and cars and smashing property, the moral high ground is lost in the blink of an eye. And that's unfortunate.

Other Reports on the Die-In Protests & Beyond