Biometrics is a class of user verification with the focus of identification of humans using characteristics unique to a particular human. Google thinks that conventional biometric systems and techniques of today are relatively inconvenient to use. The inconvenience is exacerbated as the number of secure devices continues to grow. As such, new approaches for user verification are need and desired. This is Google's second patent on bringing Iris scanning technology to the forefront based on a unique contact lens system. However the original patent laying the foundation for this invention was filed before Apple introduced Touch ID was publicly introduced. Apple's Touch ID is convenient and has recently been extended to their mobile wallet application called Apple Pay. In that light, it is the Google Contact Lenses system that appears to now be the inconvenient biometric methodology in the big picture. Yet with that said, Google's invention has its strengths and our Patently Mobile report points them out. 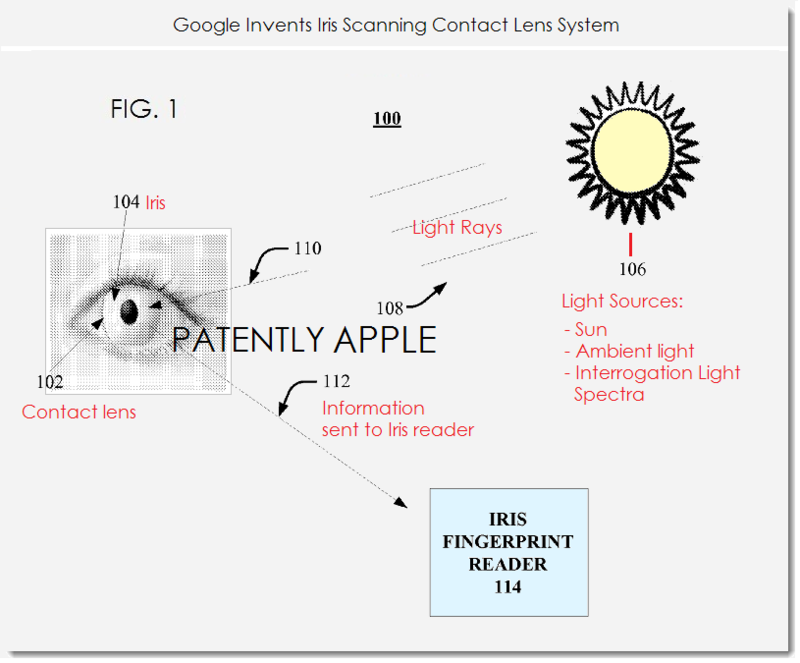 In Google's patent FIG. 1 noted above we're able to see is an illustration of a block diagram of an exemplary non-limiting system that facilitates iris scanning and/or biometric identification. For more on this, see our full Patently Mobile report.

In the end, everyone has a finger handy to scan whereas not everyone uses contact lenses. While it sounds like a cool science fiction-like idea, and it will find its place in a few niche markets around the globe, it's certainly not going to be popular with any mass market any time soon.

Then again, we reported on Monday that Google is working on bringing biometric/iris scanning to Google Glass. How successful will that be? Only time will tell.