Over the weekend we posted a report titled "Samsung's iPhone 5 Clones failed to make a Dent against Apple." Their cloner attack on the iPhone 5 with their Galaxy Alpha line-up failed to steal iPhone users to their camp or even generate enthusiasm from their own Android camp. On top of that, the Korean Times reported earlier today that Samsung held a 13 hour marathon "crisis management" meeting today to find a way out of their negative profit nightmare. And if that wasn't enough, a new published study from Flurry (a Yahoo! company) delivers another punishing blow to Samsung that knocks them to the mat for a ten count for 2014.

Apple's December quarter is traditionally Apple's biggest sales period as they introduce new and/or revised products just in time to give the Christmas shopper something tempting to buy as a personal gift or for family and friends. Yet the new stats presented by Flurry Analytics today show us another round of power stats favoring Apple.

Flurry notes that "Millions of people woke up and unwrapped a shiny new device under the Christmas tree. As we have done in years past, Flurry examined these new device activations to understand what types of devices consumers are exchanging for the holidays and with which types of apps they are filling them.

Since the beginning of the mobile revolution, Christmas Day has seen the highest number of new device activations and app installs each year, and 2014 was no exception. Flurry examined data from the more than 600,000 apps we track to understand what was under the Christmas tree and which apps we downloaded as soon as the wrapping paper was taken off." 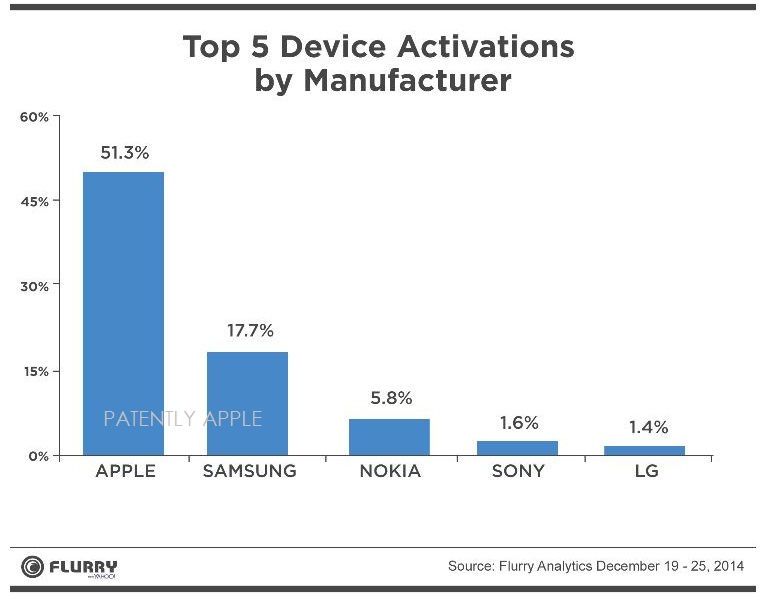 The report further stated that "it's clear that Santa is no longer into cookies - he prefers Apples. It was a banner Christmas for the Apple, the company that started the mobile revolution with the introduction of the first iPhone in 2007. Seven years later, Apple accounted for 51% of the new device activations worldwide Flurry recognized in the week leading up to and including Christmas Day (December 19th - 25th).

In that same period,Samsung held the #2 position with 18% of new device activations, and Microsoft (Nokia) rounded out the top three with 5.8% share for mostly Lumia devices. 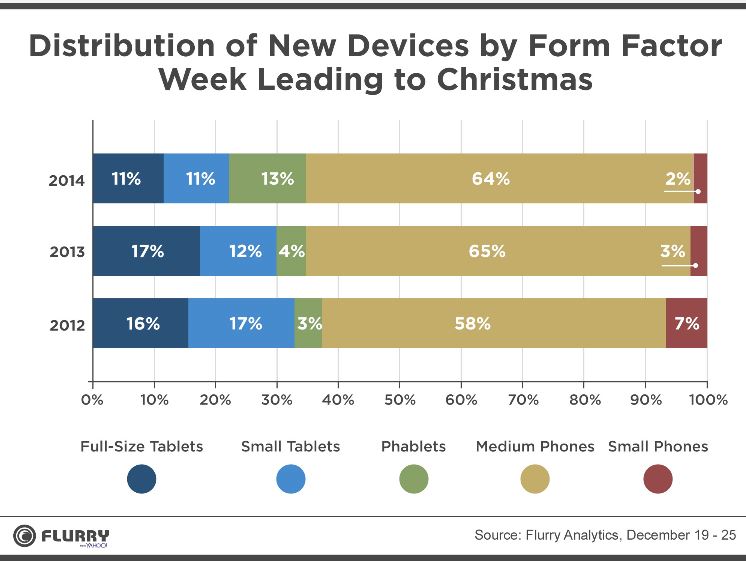 Flurry further noted that "increasingly the new device market is being driven less by smart device adoption and more by consumers finding the form factor that works for them.

Flurry added that "Christmas 2014 saw a big jump in the number of phablets activated. As we reported in September (pre-iPhone 6 Plus), phablets were gaining share. This Christmas, it appears even more consumers are switching to the larger phone now that there is an iOS option. In the week leading up to Christmas, 13% of new device activations were phablets compared to just 4% in 2013. In fact, the iPhone 6 Plus was one of the top 5 devices Flurry saw activated for Christmas; the iPhone 6 was #1.

The stats prove out that phablet's popularity seem to come at the expense of full-sized tablets and to a lesser extent small tablets. If Christmas is a bellwether for the year ahead, the Flurry thinks that we should expect strong performance from iOS devices and a continued shift to the once-derided phablet form factor.

And on one last interesting point, Flurry notes that "Fast-growing Chinese smartphone manufacturers Xiaomi and Huawei each accounted for less than 1% of worldwide device activations during the same period." In that light, the press that Xiaomi has been getting of late surely outweighs market reality.

In respect to Samsung, the Korean Times report noted that "Under the theme of 'crisis management,' the conglomerate's top decision-makers discussed how to raise profits of the group's key businesses, how to actualize plans how to grow next cash-generators that the conglomerate earlier identified, how to boost its presence in the finance industry and how to collaborate with affiliates after restructuring and realignment of units.

The report specifically stated that "Profits are down as Samsung Electronics has been suffering from increased competition from Apple and Chinese players."

In the end, it's been a phenomenal year for Apple and taking 51% of all device activations worldwide shows us the depth of Apple's iDevice penetration this year which accounts for the depth of Samsung's crisis.