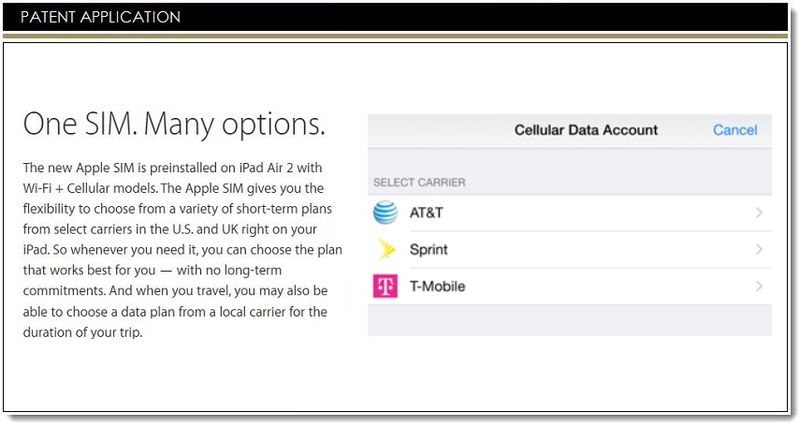 During Apple's iPad event in October they side-stepped their new Apple SIM feature that they knew would controversial. CNBC mentioned it the next day with one analyst calling it "remarkable." In their literature, Apple states that "The new Apple SIM is preinstalled on iPad Air 2 with Wi-Fi + Cellular models. The Apple SIM gives you the flexibility to choose from a variety of short-term plans from select carriers in the U.S. and UK right on your iPad. So whenever you need it, you can choose the plan that works best for you — with no long-term commitments. And when you travel, you may also be able to choose a data plan from a local carrier for the duration of your trip." Today, the US Patent & Trademark Office published the patent application that's behind the new Apple SIM.

Subscribers in a wireless telecommunication network (e.g., a cellular telecommunication network) are typically assigned subscriber identity information, which may for example be stored as part of a subscriber identity module (SIM) in the subscriber's user equipment (UE) device. As one example, subscribers in 3GPP (LTE/GSM/UMTS) networks have an International Mobile Subscriber Identity (IMSI) that identifies them in their carrier's network.

It is common practice for a SIM to be installed on a physical chip or card, which may be provided separately from a UE. Thus, in order to obtain a UE and be provided with service for the UE, a user may need to obtain the UE (e.g., from a wireless device vendor) and separately obtain a SIM card (e.g., from a service provider) and install it in the UE. Requiring multiple steps and interaction with both a wireless device vendor and a service provider in order to obtain service for a UE may be an annoyance for the end user. In addition, the requirement that a user remove the old SIM card, obtain a new physical SIM card, and install the new SIM card in order to change service providers may represent an additional cause of frustration to end users, and may represent a psychological barrier to switching service providers, which may indirectly result in higher costs and/or lower quality of service for the user.

Accordingly, considering the non-trivial disadvantages of removable physical SIM cards, improvements in the field would be desirable.

Today's invention covers the new Apple SIM. The patent application is titled "Provisioning an Embedded Subscriber Identity Module." Apple's invention describes various embodiments relating to a system and method for obtaining and personalizing an embedded subscriber identity module (eSIM) in a user equipment (UE) device. In particular, use of an eSIM in a UE device, which may be personalized (e.g., provisioned and activated) over-the-air (OTA), may represent a considerable improvement over pre-provisioned, removable, physical SIM cards.

Apple's patent FIG. 5 shown below illustrates an exemplary flowchart representing a process for personalizing an eSIM. 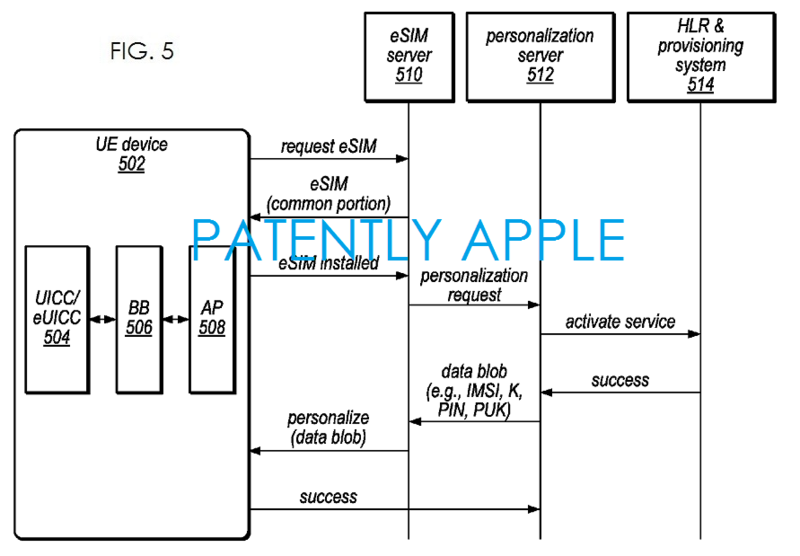 For example, user experience may be improved by the use of an eSIM in their UE device. Rather than separately obtaining the physical UE device and a physical SIM card, then installing the SIM card into the UE device, the user may be able to just obtain the UE device, which may have hardware capable of supporting an eSIM pre-installed.

Along the same lines, re-provisioning an eSIM over a network (potentially including OTA) may be a simpler process of switching service providers than going into a service provider's storefront and/or waiting for delivery to obtain a new physical SIM, removing the old SIM, and installing the new SIM.

Additionally, service providers may realize a more efficient and cost-effective mechanism for provisioning UE devices with service. Because manufacture, storage, shipping, and provisioning of physical, removable SIM cards all represent real costs to service providers which may be eliminated and replaced with a relatively cost-efficient network-based just-in-time provisioning process, overall costs may be significantly reduced. Reduced operating costs of physical storefronts may also be possible, in some cases, as more plans are sold OTA and fewer personnel and/or storefronts are required to sell service plans and corresponding removable SIM cards.

Furthermore, embodiments may comprise separating SIM provisioning into two portions--e.g., common SIM information, which may be common to some or all SIMs according to various types or classes (e.g., based on service provider, device hardware, or other factors), and personalized SIM information, which may be specific to a subscriber--which may offer further flexibility and efficiency in eSIM provisioning. For example, if common SIM information is pre-loaded into applicable UE devices, a significant amount of network bandwidth may be saved, as this portion of the SIM may typically be significantly larger than the personalized SIM information. Other benefits will also be apparent to those of skill in the art in light of this disclosure.

The UE device may install the personalized SIM information in the eSIM on the UE device. Note that the eSIM may be stored in the UE device in multiple ways. For example, the eSIM may be stored on an embedded smart card (e.g., an eUICC). Additionally, part or all of the eSIM may be installed and stored in device memory and executed by a device processor (e.g., an application processor). Note also that in some embodiments, the UE may install the personalized SIM information in a SIM on a removable smart card (e.g., a removable UICC).

Apple credits Li Ll, Arun Mathias and Ben-Heng Juang as the inventors of patent application 20140349617 which was filed in Q3 2014 with references back to 2012. This is a patent fulfilled.