In May Patently Apple was the first in North American to report on Apple reaching a deal with China's UnionPay for the coming iWallet now Apple Pay. The deal hinged on Apple integrating NFC into their next iPhone which they did with the release of their new iPhone 6 in September. Today, their secret deal has gone public with a press release stating that Apple has now added UnionPay as a payment option debit or credit card for Apple iPhone 6 users with one-tap purchases.

In October we posted a report titled "Apple's CEO Tells China News Agency, Apple Pay is top Priority, and weeks later we reported that Alibaba and Apple were in talks to form a payment alliance. Apple's CEO Tim Cook is certainly living up to his public commitment to making Apple Pay a top priority by today's announcement. And with the total number of UnionPay Cards issued both in China and abroad exceeding 4.5 billion, we could certainly see why this was a top priority to get Apple Pay quickly into this market. 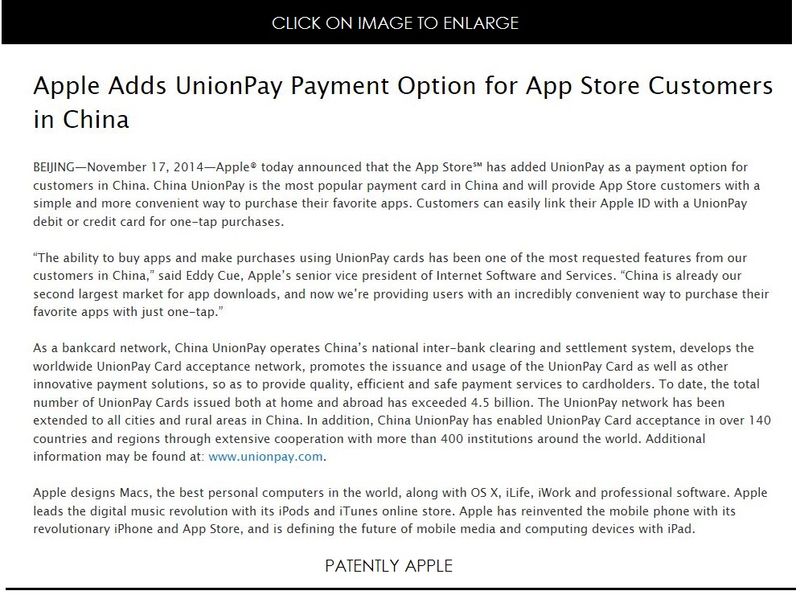 While today's press release technically states that "Customers can easily link their Apple ID with a UnionPay debit or credit card for one-tap purchases," the fact is that the deal that we covered back in May will eventually extend through to an Apple Pay application once the regulatory matters have been addressed in China. Adding NFC to the iPhone 6 was needed to sign the original deal and NFC means using Apple Pay.