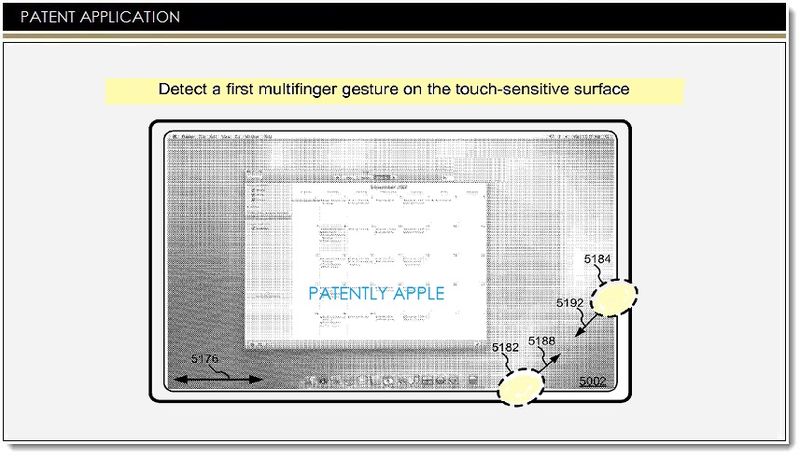 Rumors about a 12.9 inch iPad began back in May. Apple also has several patent-pending inventions on record supporting a hybrid notebook-tablet or a tablet with a smart cover containing a built-in keyboard. Both Microsoft and HP now have tablets running with Intel Core processors doubling as notebooks with full productive software for the enterprise and students. Today, Apple's patent application clearly shows us how OS X is working on a touchscreen that could be used on an iPad or MacBook which opens the door to a hybrid keyboard, touch display device. While this year's rumors have pointed to 12.2 and/or 12.9 inch iPad Pro types of devices, you have to wonder if the display could also fit into a new kind of MacBook Air or the like that supports OS X and iOS. Maybe the rumors are about one and the same thing. While only time will tell how this plays out, today's revelations are very interesting indeed. 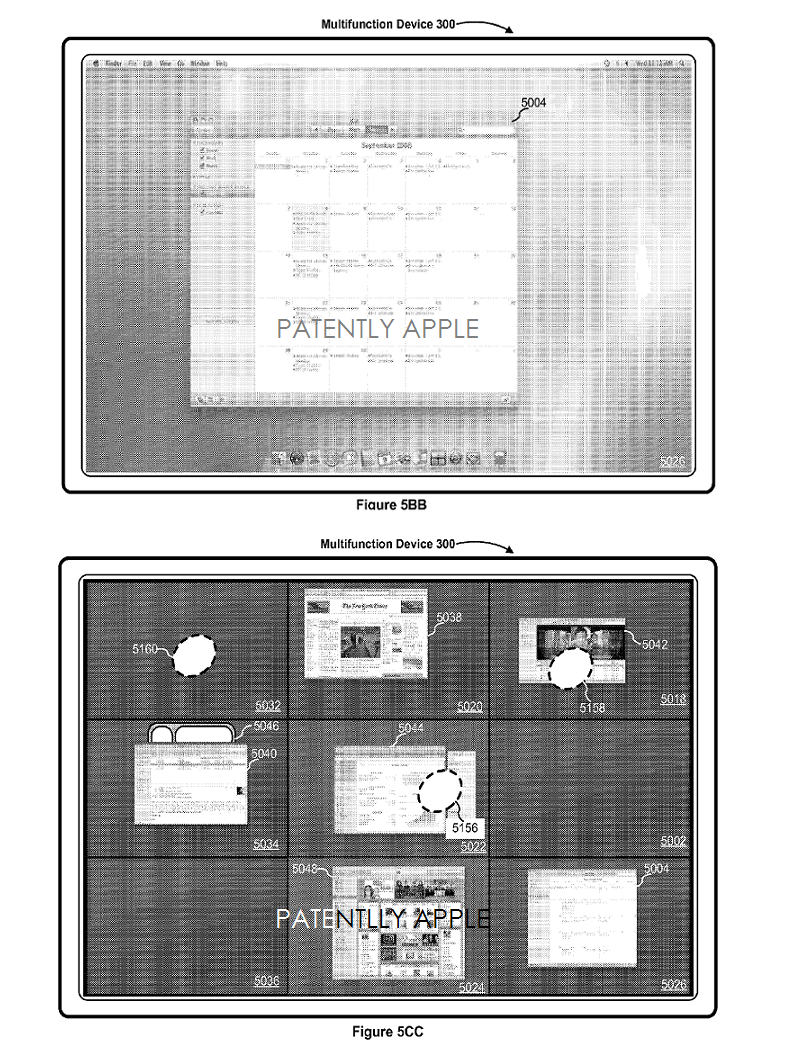 In patent 5GG we see a two-finger pinching gesture on a touch screen to manipulate the workspace. 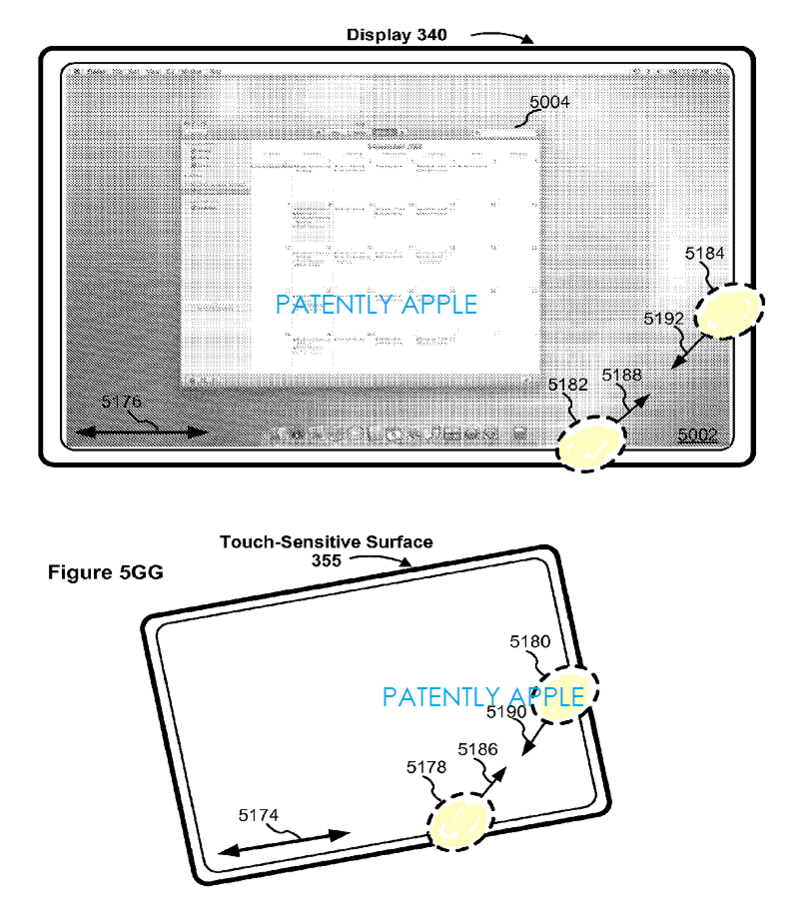 Apple's patent FIG. 6A is one of many workflow charts describing methods of operating a multifunctional touchscreen device in relation to workspaces. 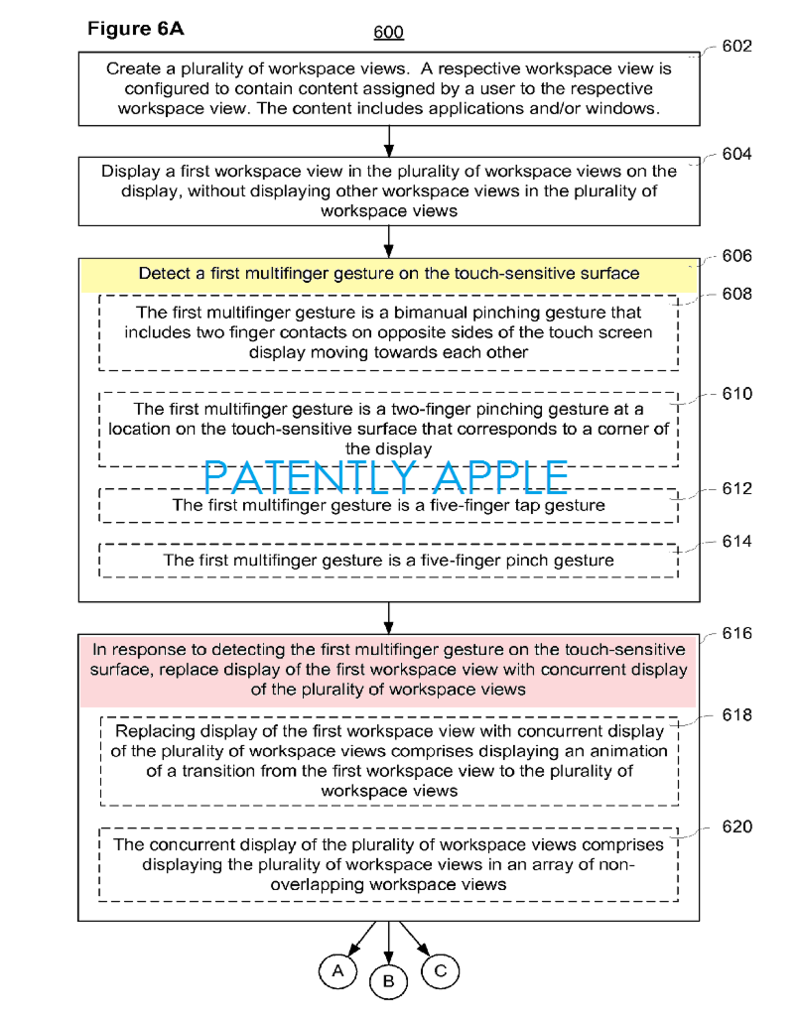 While Apple's senior vice president of software engineering, Craig Federighi has recently stated that the idea of a touch screen MacBook was basically dead because of advanced trackpads, today's revelations could keep the idea alive if it's part of a device where the display is detachable and used as a tablet. Whether this comes to be now or in the future is unknown but at least Apple has intellectual property on record supporting this notion which leaves the door wide open if needed.

In the end, it wouldn't be the first time an Apple exec said that they had no interest in something and then went ahead with it down the road. Apple's Phil Schiller openly and loudly snubbed NFC and now it's in Apple's iPhone 6 as part of an Apple Pay solution. So keeping an open mind would be wise.

Apple credits Julian Missig, Jonathan Koch, Avi Cieplinski, Michael Victor, Jeffrey Bernstein, Duncan Kerr and Myra Haggerty as the inventors of patent application 20140351707. While the patent is noted as being filed in Q3 2014, references date back to 2009 while not making this a continuation patent for some reason. Considering that this is a patent application, the timing of such a product to market is unknown at this time.