The GTAT debacle began publicly on Oct 6 when the news of their filing Chapter 11 was made public in a press release. The shock of the news quickly rippled throughout the industry and beyond. We then learned that GTAT's COO sold stock at the first sign of trouble which led the SEC to begin an investigation. Then the judge in the Chapter 11 case wanted the document unsealed against Apple's wishes and the report was inflammatory without a doubt. Then Bloomberg reminded us all of how GTAT was talking up the deal with Apple at the very time everything began to unravel. Eventually Apple and GTAT made a deal to lessen the burden on GTAT but now GTAT's creditors aren't happy with that private deal and want's the court to step into this mess again. Late tonight, a new report has come to light to show us the nightmare production of rejected sapphire proving that this project was on the fast track to nowhere.

The Wall Street Journal has published a very interesting story about the deal between GT Advanced Technologies (GTAT) that's worth a read. Here are just a few of the key highlights:

GT made furnaces for producing sapphire. According to Apple's letter to the creditors, GT told Apple in March of last year that it was developing a furnace that could produce a sapphire cylinder, known as a boule, weighing 578 pounds, more than twice as large as what were then the biggest boules. The larger boule would yield more screens, reducing costs.

On Oct. 31 of last year, GT and Apple signed an agreement, a few days after the first 578-pound boule emerged from a GT furnace. The cylinder was cracked so badly that none of the sapphire was usable, people familiar with Apple's operations said. You'll see below are a collection of photos illustrating the ongoing problems in the production of the record size boules. 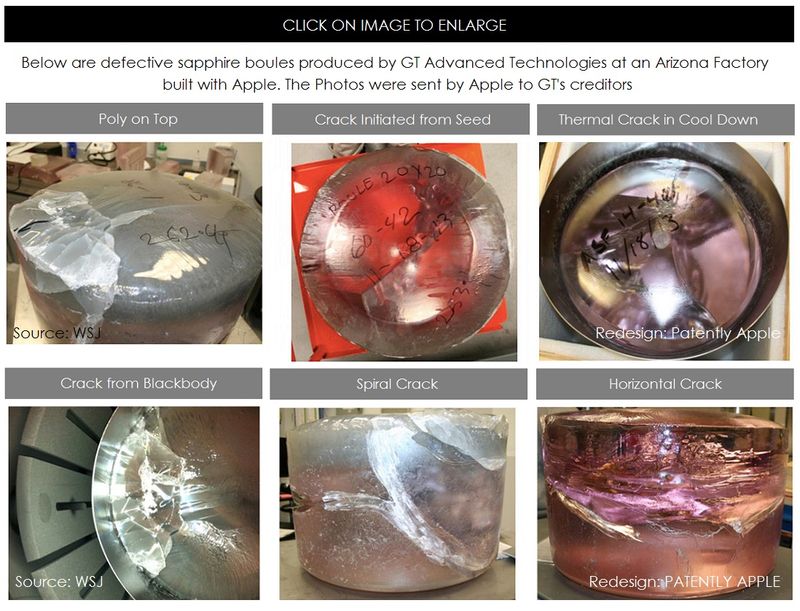 GT said the quality would improve, and Apple was encouraged by GT's track record of making successively bigger furnaces.

Producing sapphire proved to be the biggest problem. It took roughly 30 days and cost about $20,000 to make a single boule. The people familiar with Apple's operations said more than half the boules were unusable.

GT stored unusable cylinders in rows in an area of the Mesa factory that employees labeled the "boule graveyard," people close to GT's operations said.

Beyond just production problems, the company that had no experience with actually producing/manufacturing the actual sapphire boules and things got out of control and mismanagement abounded.

The report states that "GT quickly set out to hire 700 staffers. Hiring moved so quickly that at one point in late spring, more than 100 recent hires didn't know who they reported to, a former manager said. Two other former workers said there was no attendance policy, which led to an unusual number of sick days.

GT managers in the spring authorized unlimited overtime to fill furnaces with materials to grow sapphire. But GT hadn't built enough furnaces yet, so many workers had nothing to do, two former employees said. They added that "We just kept sweeping the floors over and over," one of the former employees said. "I just saw money flying out the door."

The report further added that "Manufacturing wasn't the only problem. In August, one of the former workers said, GT discovered that 500 sapphire bricks were missing. A few hours later, workers learned that a manager had sent the bricks to recycling instead of shipping. Had they not been retrieved, the misfire would have cost GT hundreds of thousands of dollars." The question should have been, was it really a mishap?

For more on this, check out the Wall Street Journal's full report written by Daisuke Wakabayashi.

On a closing note, Bloomberg reported earlier this week that Mesa City Manager Christopher Brady recently stated in an interview that Apple "... indicated their commitment to us: They want to repurpose that building and use it again."  Apple has said it's focused on preserving jobs in Arizona and promised to work with state and local officials as they consider their next steps. While that's a great gesture to make at this stage, only time will tell if Apple actually delivers on that promise or simply walks away from this entire negative chapter.

NOTE: The MIT Technology Review published an article on this subject on Nov 25, 2014 titled "Why Apple Failed to Make Sapphire iPhones." It basically walks you through some of the points that are readily found in the original Chapter 11 filing.