The Competition sharpens their Strategies to Challenge the iPad

The 200 million annual shipments milestone for branded tablets continues to elude OEM vendors and overall growth for 2014 is set to come in at a disappointing 2.5%. Apple and Samsung continued to lead branded vendors in unit share during 1H 2014 although with mixed fortunes. Apple iPad units were down 13% year-over-year in the first six months of the year. Apple's CEO Tim Cook addressed the drop during their last financial conference call while emphasizing the point that significant innovation was on the way for the iPad. So all eyes will be on Apple's upcoming iPad event. Although the iPad is expected to offer a new gold finish and Touch ID for Apple Pay, it's still unknown whether or not there'll be a significant innovation revealed that will be able to raise the bar high enough to stop the iPad's market share from eroding further. With next generation notebooks coming to market this quarter and Intel finally cracking the tablet market at the low end, the pressure is now on Apple to take the iPad to the next level or be run over by the competition.

In Q2 2012, Apple held a whopping 68.2% market share in tablets and two years later they're share has dropped to 26.9%. The likes of ASUS, Lenovo, and Amazon are gaining some ground and white box vendors in China using Intel processors are beginning to nibble at the bottom of the market.

Within the tablet supply chain, Intel continues to show progress toward its goal of 40 million devices powered by its processors in 2014. While many tablets will come out in non-branded models, 2014 looks to be the tipping point for Intel's mobility processor strategy. The company has also set up market-specific relationships that should propel it forward during 2015. "Forty million units is only a minor dent in ARM's domination of tablets, though Intel is quickly becoming a formidable applications processor architecture competitor," notes ABI.

So what about the next generation notebooks? Well, for starters there are the 2-in-1 notebook models that are gaining traction in the market against straight tablets like the iPad. And now a new twist in notebooks will be coming to market later this month led by HP.

HP has an-all-new line, starting with their high end model beginning at US$300. HP is calling it the "HP Stream Notebook" with a 14 inch display. The lower end will begin at US$200 with an 11.6" display. 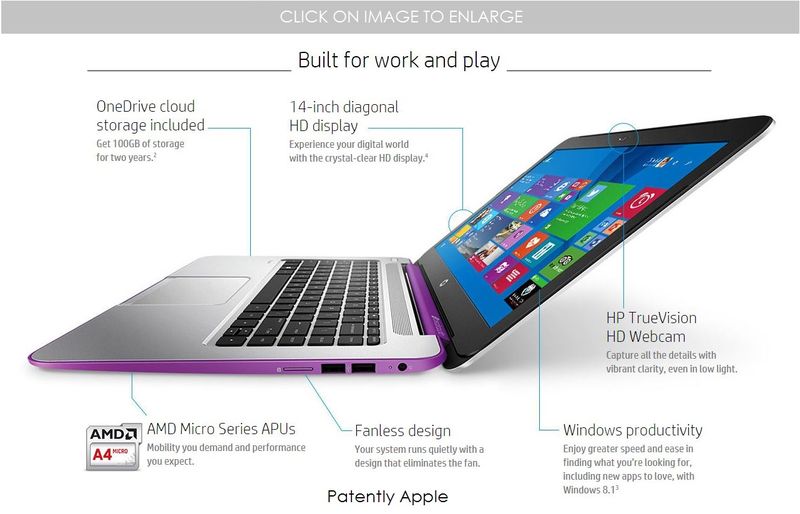 The angle is that users will store their content in the cloud for easy access from anywhere they have an internet connection. In fact, with the 14" model, users will get 100GB of storage for two years so they can easily store and share their favorite photos, videos, documents, files, and more. You could read about this unit here.

From what I've been reading, the new HP Stream 14 will also come with one free year of Office 365 Personal as well as a $25 gift card for either the Microsoft Store or Xbox game purchases. You can read about the new HP Stream lower end models here.

A new report out today covers all of the best Android tablets that will be out to gnaw a little more market share away from Apple this holiday season. Samsung's new 12.2 inch model will be one that could offer an edge over the iPad for those wanting a larger display.

While I'm not about to get into the "market share" argument that we know in and of itself means little, it does play into the psychological warfare that's being played out in the media on a daily basis that could sway everyday consumers one way or another.

On the basis of a head-to-head tablet war, Apple will always appeal to die-hard Apple fans who love the complete ecosystem, iOS and integrated applicaitons. That will never change. Yet winning over new customers that aren't Apple fans will take a little more motivation.

For the holiday season, the lines for mobile devices are already beginning to blur on the mobile device front. Apple's new strategy, as we know thus far, is to win over those who want a phone and tablet in the form of the iPhone 6-Plus. Rumors are already buzzing that the new Apple phablet may already be in the lead over their 4.7 inch model which has to be depressing news for competitors like Samsung.

Yet the competition is making headway with their new hybrid notebook-tablets and the new Stream-styled notebooks coming to market are bound to be appealing to students, consumers and families who are on a tight budget for new tech toys this holiday season.

It's not always a tablet vs tablet scenario when shopping for a new mobile device. Different kinds of devices will tempt consumers to think in terms of mobile in general and not always about a single head-on comparison as we'd like to think.

As for myself, I'll be getting my new iPhone 6-Plus soon, I just upgraded an iPad mini to an iPad Air and yet I may still consider HP's new Stream notebook for my home's kitchen area. I mean, how can you go wrong buying a decent notebook with a 14" HD display for a measly $300? If you have the budget and don't mind Windows for a minor computer, it's a tempting deal.

Yet at the end of the day, all eyes will be on Apple's October sixteenth iPad event. Apple fans and competitors alike will have their eyes glued to the keynote in the hopes of catching a glimpse of that certain something new or exciting twist that no one saw coming.

Could Apple's next generation of iPads have the innovative power to crush their competitors newly devised strategies as noted in our report in a flash? So far Apple has been able to continue their innovative streak to remain the number one tablet in the world. Will they do it again? We'll know the answer to that question in thirteen days time.