HP Introduces a Mind Blowing Next-Gen Desktop for Creatives & Beyond

HP is about the shake the PC world like it hasn't in years. HP introduces Sprout, a revolutionary PC that's for 3D printing. HP's video called Hands noted above captures the spirit of Apple's Think Different ad run many years ago. I think this could be something very inspiring for artists and it could truly be the beginning of a new direction for PCs. It gave me Goosebumps just thinking about where this can take us. Report Updated at 2:33 and 7PM PST.

It's a revolutionary new way to unleash your creativity through an immersive multi-touch experience.

Unleash the Artist in You

How it all Works

How it all works and what the system provides can be seen in this next video after the commercial. Be patient as it carries a narrative with a Stephen Hawking style voiceover.

One of the virtual displays that you'll see in this video was first covered in our 2010 report titled "The Next OS Revolution Countdown Begins." The concept was called the Continuum Project.

HP Inc., the PC and printer company that will be created by the division of Hewlett-Packard into two separating operating units, made an informal debut Wednesday and left little doubt that it will bet much of its future on 3D printing--a revolutionary manufacturing method that promises to transform numerous industries but is currently impractical for large-scale production. HP Inc. is bent on changing that.

At a launch event Wednesday in Chelsea, a trendy Manhattan neighborhood dominated by art galleries and cafes, execs introduced a machine that promises to bring 3D printing into mainstream use in applications ranging from industrial design to automotive manufacturing. 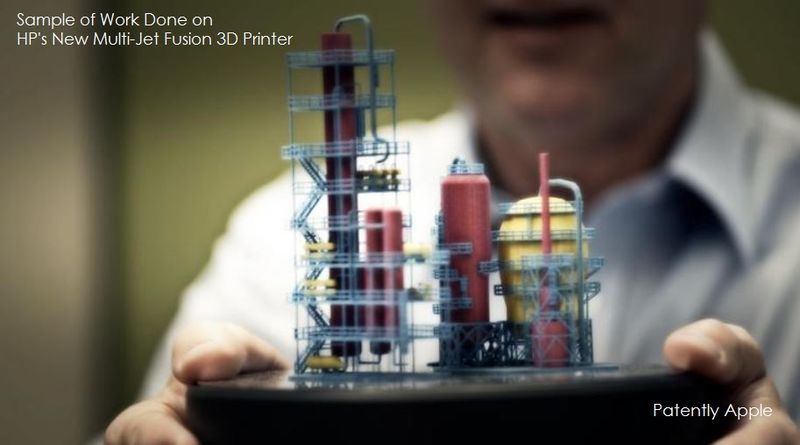 Dion Weisler, who will head up HP Inc. introduced the HP Multi-Jet Fusion, a 3D printer he said is 10 times faster than anything currently on the market. The machine has a footprint about the size of a household washer-and-dryer set, making it office friendly.

The Multi-Jet Fusion will enter beta testing next year and become commercially available in 2016. HP did not reveal pricing details, but execs said it will carry a price that will make it a practical option for a number of business and industrial applications.

Sprout is Available Today and Includes Apps from DreamWorks, Evernote and Martha Stewart

In Reuters report they note that "Sprout sits atop Microsoft's Windows 8 and can be wielded via a sensor-laden mat on the desktop akin to a giant mouse pad. HP is betting that users prefer touch controls at desk-level rather than onscreen.

Its biggest departure from the traditional computer is a display-mounted 3D scanner and projector that creates a digital image of objects placed on the mat. It also projects images onto the desktop, which a user can edit by touch.

HP executives demonstrated how various items from pens and cups to figurines and pictures can be scanned, tacked onto existing images or video, edited then emailed or shared through social media.

It will come with apps from DreamWorks Animation, Skype, Evernote, Martha Stewart, among others."

I'm not sure anyone saw this coming. And although I'm an Apple fan, I'm a two platform family and so I congratulate HP for this incredible new computer and being able to keep it so secret. On that point they even beat Apple.

At the end of the day, could Apple be thinking of similar type of computer in the future? Not likely, though it's not impossible down the road. Apple already has powerful 3D technology projects in-house and their team was strengthened last year with their acquisition of PrimeSense who has many patents in this field relating to 3D scanner/cameras for the desktop, on the go and in smartphones.

Apple's Mac Pro is for the creative, engineering and film communities and something like the HP Sprout's 3D camera/scanner could be of great interest for Apple customers being that DreamWorks is backing HP's new computer.

Yet for now it's far too early to even think of Apple matching the HP Sprouts capabilities. Though I have to admit, I was taken aback by Craig Federighi's recent revelation that the iMac Touch was never going to happen. Federighi noted that Apple didn't think that it's the right interface, adding that "it's awkward and uncomfortable to sit at a desk and continuously reach forward to touch a computer screen."

One of the aspects of HP's Sprout is to provide a huge touch pad that mirrors what's on screen so that you can have a touch screen on a surface directly in front of you without having to reach out and actually touch the glass display. Was Federighi hinting of this kind of future direction for touchscreens for the desktop indirectly? Only time will tell.

For now HP has taken a bold move in reinventing the desktop for the creative community and beyond and their 3D printer to follow in 2016 will allow large companies to take advantage of the HP's entire 3D printing solution from workstation to printer. HP is showing some real leadership in this future market and it's great to see it coming from Cupertino.