Apple Wants to Compete with Samsung in Iran

For Apple, Iran's 77 million people offer a particularly attractive new market. Iran's population is relatively young, with 42% of its people under age 25. Iran also boasts a relative large middle class. And despite decades of animosity between Tehran and the West, many well-off Iranians still embrace Western brands and trends.Today, Samsung is successfully selling their mobile devices in Iran and Apple wants in on the action.

The Wall Street Journal reports that Senior Apple executives have met potential Iranian distributors at Apple's regional headquarters on London's Hanover Street, four people familiar with the matter said. Apple explored the possibility of having Iranian partners sell Apple products at so-called premium resellers as they do in certain countries like South Korea. Instead of company-operated Apple stores, such outlets would be midsize franchisees that sell Apple products only, a model the company has used in Europe and Asia, the people said.

Apple wants to continue growing their mobile device footprint for their wildly popular iPhone 6 and new iPad Air tablets. Apple want in on the Iranian market to compete with other brands such as Samsung. The picture illustrated below shows us that Samsung is enjoying access to a huge market without Apple's presence. 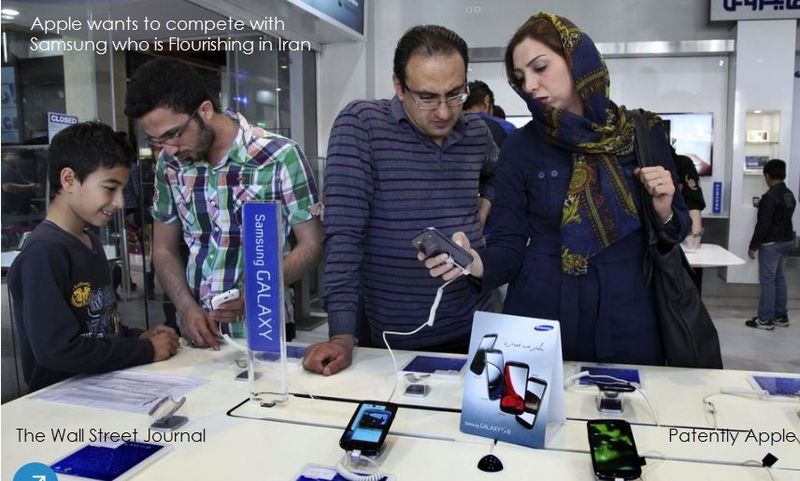 However, a move into Iran for any Western company is still fraught with obstacles. Yet Apple's conversations come amid a flurry of similar exploratory contacts between Western companies and Iranian businesspeople about how to set up shop in Iran, should a recent diplomatic thaw lead to a permanent easing of economic sanctions.

No formal announcement has been made at this time and depending on the politics of the day, it might not happen for some time. But Apple is making every effort to be ready when the get the green light from Washington.

In the meantime, South Koreans are still hoping that Apple will one day soon announce a flagship Apple Store in their country. We reported on Monday that "When it comes to Apple's per-capita sales, Korea is the company's most important market." The iPhone 6 goes on sale in Korea this Friday.