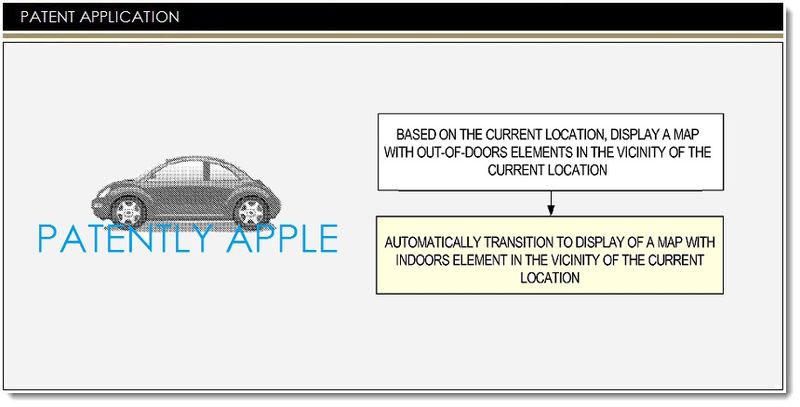 On October 16, 2014, the US Patent & Trademark Office published a patent application from Apple that reveals an invention relating to future iDevices and CarPlay that will be able to use seamless outdoor to indoor map transitioning. The mapping system could start with in-car navigation to a parking lot and then transition to an indoor parking map and eventually further transition to the inside your destination, be it the inside of a mall, a school, a convention center and beyond. In 2013 Apple acquired WifiSLAM and this invention likely borrows some of their technology.

Such visual navigation aides are often accompanied by audible aides. For example, in addition to highlighting a suggested route on the displayed map, the navigation system may audibly tell the user when to turn, which direction to turn, the name of the street on which to turn, etc. Sophisticated navigation systems may also indicate things such as the user's speed, the current heading, the current weather at the destination, the current speed limit, traffic conditions along the proposed route, alternative routes, points of interest along the route, etc.

As long as navigation systems are able to receive accurate GPS signals, the systems work remarkably well in navigating users to the GPS coordinates associated with their designated destination. However, things start to break down in situations where GPS signals cannot be reliably received. Unfortunately, GPS signals can rarely be reliably received when something blocks the navigation system from the open sky. Navigation systems are blocked from the open sky in a variety of circumstances, including but not limited to dense tree cover, tall buildings, tunnels, covered parking structures, and most indoor environments.

Unfortunately, the outdoor GPS location associated with a destination is often not where the user actually needs to go. For example, a user that wants to visit a particular store in a mall may actually need to first find a parking spot in a covered parking structure near the mall, and then need to find the store within the mall itself. Conventional navigation systems may simply lead such a user to the outdoor GPS location associated with the mall, and then leave the user to fend for themselves in finding a parking spot and the desired store. Often, the tasks of finding a suitable, available parking spot, and then the specific store in question, may involve a lot of wandering, frustration, and wasted time.

This is what Apple's latest invention is to solve.

Apple's invention relates to mapping systems and techniques for providing seamless transitioning from outdoor mapping to indoor mapping. In one embodiment, the techniques involve detecting a current location of a user's mobile device. When the vehicle gets close enough to the destination, the navigation system begins to receive a signal from a Bluetooth LE sensor located at the gate of a parking structure #102 associated with the destination.

In response to detecting the signal from the sensor and/or a corresponding drop in the strength of the GPS signal received by the navigation system, the navigation system may automatically transition from map #104 to an indoor map #106 of the parking structure. The indoor map of the parking structure also includes a current location indicator, a destination indicator, and a suggested route indicator.

Apple notes that while the user is within the parking structure, the navigation system may determine the current location based on the signal from the stationary sensor, GPS signals, or both. After the vehicle is parked, the user's mobile device navigation system changes as it enters a mall and provides the user with an internal mall map.

Apple further notes that using the techniques described in the invention, it will possible for a user to search for specific indoors elements, such as stores within a mall, seats within a stadium, and parking spots within a parking structure.

Apple's patent FIG. 2 noted below illustrates the situation in which the user of a vehicle may use a navigation system within the vehicle to locate and navigate to a parking spot based on specific criteria. 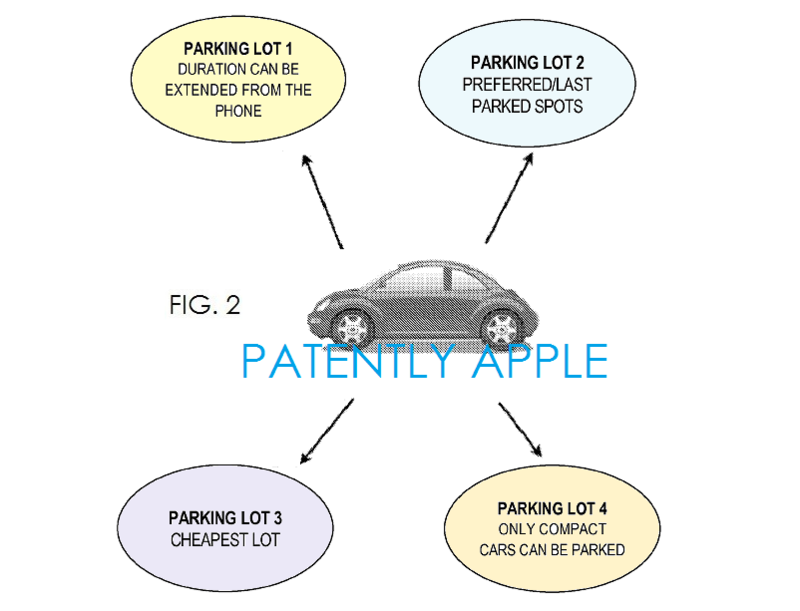 On the other hand, if the selection criteria's preferred/last parked spots, cheapest spots, or compact-only spots, the search results may present lots 2, 3 or 4, respectively. As mentioned above, the search for specific spots may take at various different times. For example, the search may take place when the original destination is selected, when the vehicle comes within a predetermined distance of the destination, or upon occurrence of any other search-triggering event.

In a report that we posted in August titled "Apple and Google Headed for an Indoor Location Services War," we quoted Don Dodge who is currently an investor in ByteLight while working at Google as a Developer Advocate. He stated that "Three years ago I was at Stanford [University] and I saw these Stanford PhD's doing indoor location. They had a map of the Stanford campus and they showed me walking around the campus. I could actually see where I was in real-time moving. I was stunned! It was unbelievable. So, I'm an Angel investor, I invest in a lot of companies, and I invested in that company. And thirteen months later, it was acquired by Apple." He was referring to WifiSLAM.

When it comes time to travel to the event, the navigation system may have a control that allows the user to simply select the previously-stored event information. In response to selecting the previously-stored event information, the navigation system navigates the user to the venue using an outdoor map, and then seamlessly transitions to an indoor map of the venue and navigates the user to the particular reserved seat.

Apple credits Devrim Varoglu, Monika Bansal and Swapnil Dave as the inventors of patent application 20140309924 which was filed with USPTO in Q2 2014. Considering that this is a patent application, the timing of such a product to market is unknown at this time.