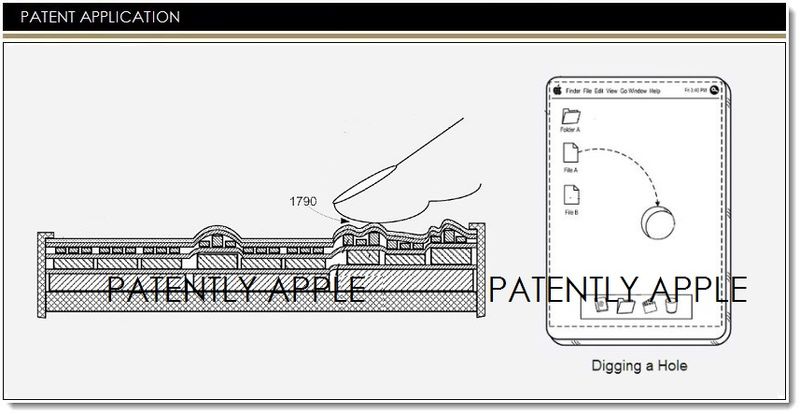 The US Patent & Trademark Office published two patent applications from Apple today that reveal their ongoing work regarding advanced haptics and new iOS interface elements and metaphors for consumers and the enterprise. At a basic level, Apple's advanced haptics invention may have played a role in Apple's new Apple Watch.

After Apple introduced Apple Watch we posted a report a report titled "Apple's new Products Brings a new Round of Patents to Life." In that report we covered Apple's new senses touch and force technologies found in the Apple Watch display. To a certain degree Apple has implemented aspects of today's patent application that used in conjunction with an OLED display.

Whether Apple intends to introduce a more radical form of sense applications in the future for map contouring and/ or screen texturing is unknown at this time. In today's patent application Apple Legal has once again tweaked their patent claims but haven't the invention's general description that we covered back in 2012.

Today's patent application 20140325458 titled "Touch Inputs Interacting with User Interface Items" was first covered by Patently Apple in 2011 in a report titled "Apple Focused on Advancing iOS Metaphors to a Higher Level." The patent covers new iOS metaphors and new ways of working with new interface items on a touchscreen. Many of the ideas Apple covers in this invention appears to illustrate that Apple is thinking about new consumer and enterprise applications. Apple illustrates a new "shredder" UI metaphor, one for aging files and the main one for creating a quick hole or trap door metaphor relating to backing up a file. You could review our 2011 patent report for more details. Now that Scott Forstall is gone and Jony Ive is in control of iOS and OS X along with Federighi, the 3D appearance of these metaphors will likely die on the vine. But that doesn't necessarily mean that the some of the ideas found in this invention won't survive in some form or other.