During our research in foreign databases this morning we found an Apple patent application filed in South Korea this month relating to a next-gen heat sink made of liquid metal.

A heat sink is a term for a component or assembly that transfers heat generated within a solid material to a fluid medium, such as air or a liquid. Examples of heat sinks are the heat exchangers used in refrigeration and air conditioning systems and the radiator (also a heat exchanger) in a car. Heat sinks also help to cool electronic and optoelectronic devices, such as higher-power lasers and light emitting diodes (LEDs).

A heat sink is physically designed to increase the surface area in contact with the cooling fluid surrounding it, such as the air. Approach air velocity, choice of material, fin (or other protrusion) design and surface treatment are some of the design factors which influence the thermal resistance, i.e. thermal performance, of a heat sink. One engineering application of heat sinks is in the thermal management of electronics, often computer central processing unit (CPU) or graphics processors. For these, heat sink attachment methods and thermal interface materials also influence the eventual junction or die temperature of the processor(s).

Apple notes that aluminum alloys are not recommended for machining because it's too soft. Copper could also be used since it has around twice the conductivity of aluminum, but is three times as heavy as aluminum and around four to six times more expensive than aluminum.

However, none of the conventional heat sink materials have a superplastic forming characteristic that would allow them to be thermoformed by processes such as stamping to create extremely high heat transfer surface area at a micro- and nano- level.

Apple's patent relates to a heat sink having nano- and/or micro-replication directly embossed in a bulk solidifying amorphous alloy comprising a metal alloy, wherein the heat sink is configured to transfer heat out of the heat sink by natural convection by air or forced convection by air, or by fluid phase change of a fluid and/or liquid cooling by a liquid.

Apple's patent Figure 6 shows pin-, straight- and flared fin heat sink types that could be made of liquid metal.

One of the inventors found in Apple's October 2014 Korean patent filing was Christopher Prest. Apple's patent application was discovered in the European Patent Office's database this morning. 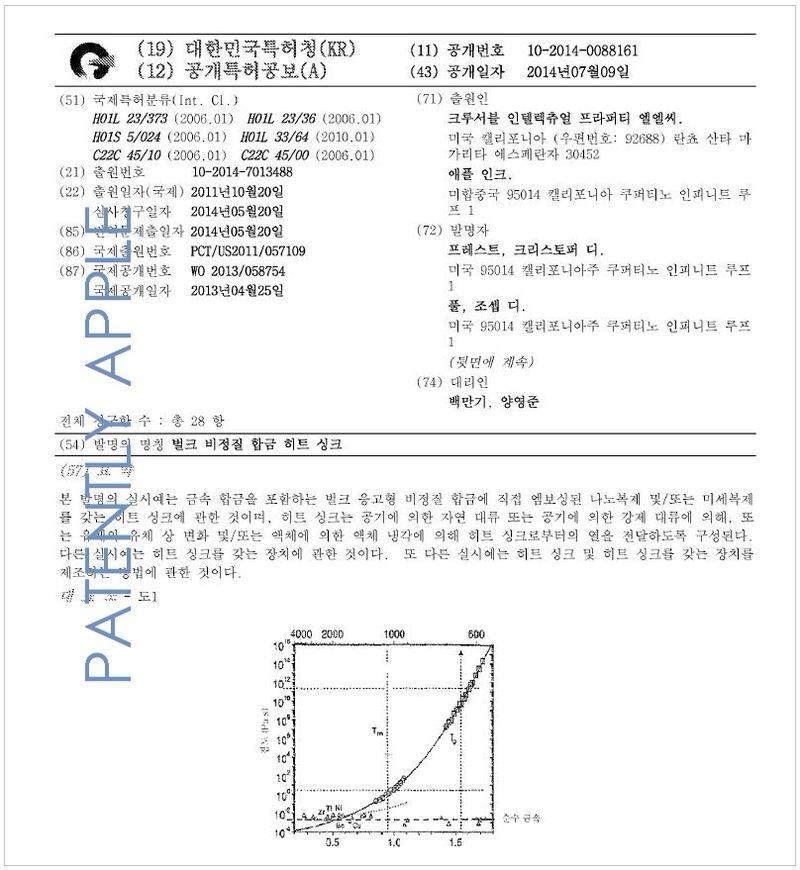 A second Apple patent application filed in South Korea during the same time frame covered a "self-optimizing chemical strengthening bath for glass (KR20140093284) that Patently Apple covered in June 2013. Apple's last US liquid metal patent application and one that we didn't cover was filed on October 16 under the title "Optimized Multi-Stage Inductive Melting of Amorphous Alloys." It was a continuation patent.

Apple doesn't allow us to know what specific devices that the heat sinks designed with liquid metal are being designed for. Most of Apple's liquid metal patent applications are frustratingly vague by listing the same group of devices that their invention could relate to. The standard verbiage is as follows: An electronic device can refer to any electronic device known in the art. For example, it can be a telephone, such as a cell phone, and a land-line phone, or any communication device, such as a smart phone, including, for example an iPhone, an electronic email sending/receiving device. It can be a part of a display, such as a digital display, a TV monitor, an electronic-book reader, a portable web-browser (e.g., iPad.), and a computer monitor.

While Apple's venture into researching the use of liquid metal in products has always sounded promising, so did Apple's partnership with GT Advanced Technologies for sapphire and we all know how that turned out. Apple had extended their agreement until February 2015 with Liquidmetal Technologies Inc in May. February 2015 is around the time Apple Watch may be ready. Does that mean that Apple uses Liquid Metal in their upcoming Apple Watch? So far Apple's literature and marketing verbiage has yet to reveal such a development. Is this another failed materials project? There must have been a reason for the license extension, so it'll be interesting to see what transpires in Q1 2015 on this front.