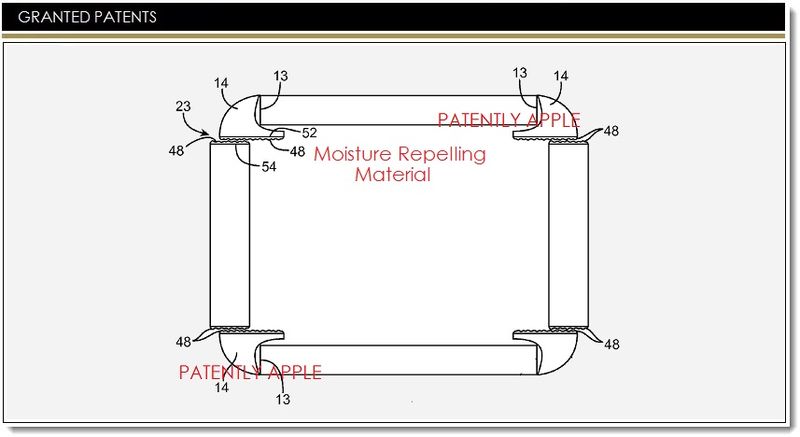 Prior to Apple's great event that's scheduled for later this morning – The US Patent and Trademark Office officially published a series of 47 newly granted patents for Apple today. In this particular report we specifically cover Apple's latest iDevice related waterproofing invention. It's been rumored that Apple may introduce the iPhone 6 with this new feature. Will it be introduced today? We'll know in just a few hours.

In Apple's patent FIG. 3 noted below we're able to see a cross-sectional side view of a portion of an electronic device showing how surfaces of a gap between housing structures may be coated with a moisture repelling coating to cause moisture to bead into droplets and thereby become less likely to intrude into the interior of the device. 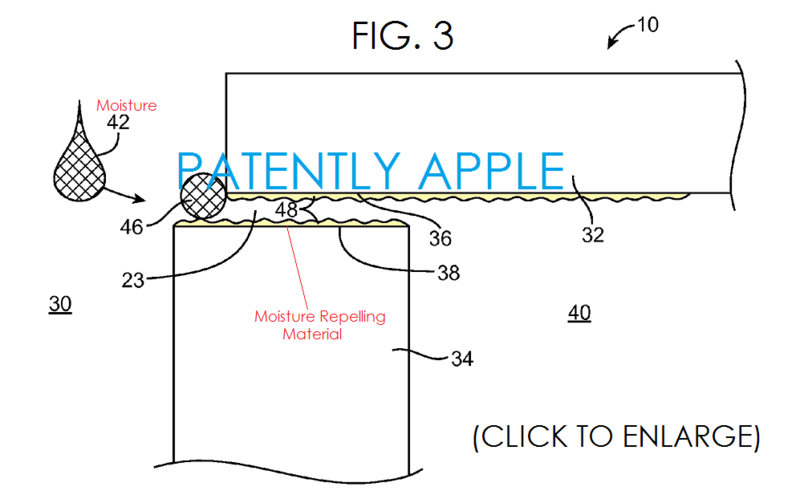 Apple notes that materials that repel moisture are sometimes referred to as hydrophobic (water-repelling) coating materials. Coating #48 noted above in patent FIG. 3 may exhibit the ability to repel other liquids in addition to water. For example, coating 48 may repel oils and adhesives. Coating materials that repel oils are sometimes referred to as oleophobic materials. Coating 48 may, if desired, exhibit both hydrophobic and oleophobic properties. 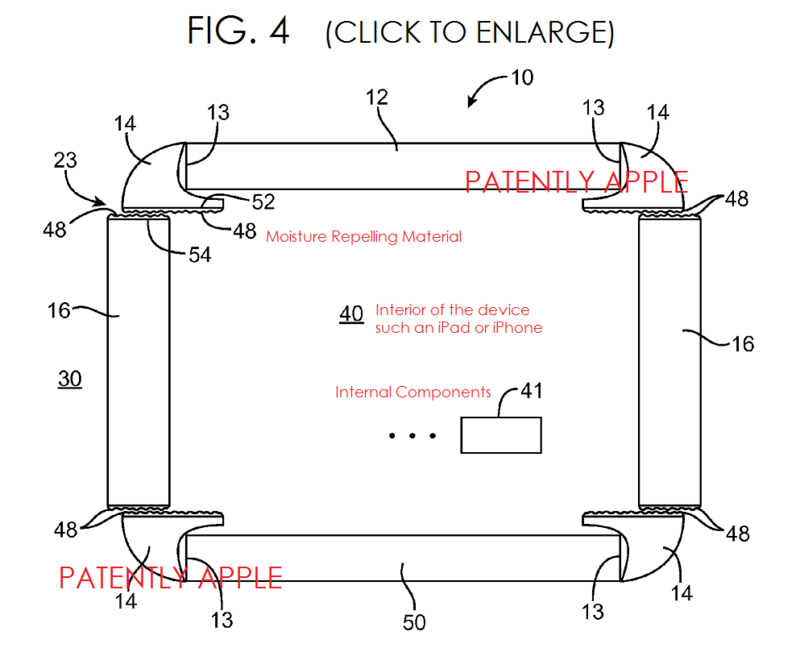 In Apple's patent FIG. 4 noted above we're able to see a cross-sectional end view of mobile devices such as an iPad or iPhone. Member #12 may be a display cover glass layer associated with a front-facing liquid crystal display (LCD), organic light-emitting display, or other kind of display. Trim structures #14 may be formed form a material such as glass-filled nylon or other plastic (as an example). As a side note, it should be noted that Apple has also considered using liquid metal as a substrate for waterproofing future iDevices. A second liquid metal patent that surfaced in 2013 also hinted of such an application

In the arrangement of patent FIG. 4, opposing surfaces #52 and #54 of mated housing members #14 and #16 in the vicinity of gap #23 are coated in the moisture repelling (hydrophobic) material. The moisture repelling material reduces the likelihood that moisture will enter gap between housing structures and reach the interior (#40) of the device.

Apple currently has a number of patent pending inventions on hand relating to waterproofing future iDevices that you could review (one, two, three and four).

Apple credits Scott Myers, Douglas Weber, Tang Yew Tan, Richard Dinh, David Pakula and Jason Sloey as the inventors of granted patent 8,830,662 which was originally filed in Q1 2011 and published today by the US Patent and Trademark Office.