In a new Charlie Rose interview that aired last night, Tim Cook talked about the late Steve Jobs, Apple TV, the acquisition of Beats and that Apple is working on 'blow away" products that haven't been rumored on thus far. When you think of Apple's developing indoor location services, the incredible 3D technology acquired from PrimeSense last year and Apple's ongoing patent application revelations revealing things to come, it's not that much of a stretch to imagine. Yet it's always appreciated when Apple's CEO Tim Cook grants a key interview to talk up the future positively so as to keep both consumers and Apple fans hyped for all-things Apple. The second part of the Charlie Rose interview will air Monday.

An NBC report noted that "Apple CEO Tim Cook thinks the way we watch TV is archaic, and he wants to change it. In a wide-ranging interview on the 'Charlie Rose' show, portions of which aired Friday night, Cook hinted that Apple has some things up its sleeve when it comes to radically improving the television-in-the-living-room experience. 'TV is one that we continue to have great interest in,' he said in a clip released before the show. Cook said TV viewing technology is 'stuck back in the '70s,' adding, 'the interface is terrible. I mean, it's awful.'"

This is something that Tim Cook first revealed back in December 2013 in an exclusive interview with NBC's Brian Williams. 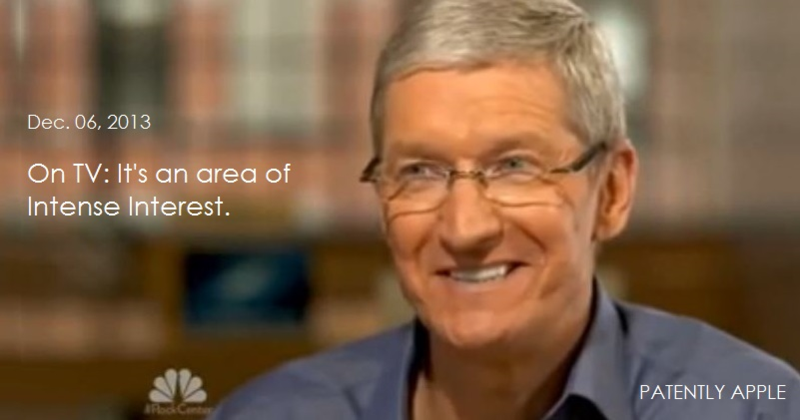 Tim Cook on their Beats Acquisition

Cook stated that Apple's working on "blow-away" products that nobody even knows about, and that "haven't been rumored about yet." Of course this simply echoes the message that Jony Ive hammered home in an interview with Time Magazine back in March of this year. Ive noted that "We are at the beginning of a remarkable time, when a remarkable number of products will be developed."

On the topic of competiton, Cook views Google as Apple's top competition. When pressed why it wasn't Samsung, Cook notes that it's Google that supplies Android to Samsung, and others.

On iCloud security, Cook noted that "it wasn't hacked" this past week, instead calling it "a phishing expedition." He added that the company is trying "bring more awareness to these schemes."

Apple added ABC's live news to Apple TV and other new channels over the summer. They've also subtly hinted that Apple TV may gain a video gaming component in the future. So the evolution of Apple TV continues. Yet the exuberance that Cook brings to the topic of Apple TV each and every time he talks about it suggests that we'll one day see a giant leap forward that will blow us all away. I think we'd all like to see that. Until such time, stay tuned for part two of Charlie Rose's interview with Tim Cook on Monday.

Could Apple TV be one of Apple's hottest iDevices of the Year?

(One segment points to Next-Gen Sports on Future Apple TV)