Yesterday we reported that Apple went out of their way to show the world the extensive stress testing that they did for the iPhone 6 Plus by inviting a CNBC crew in to film the testing process the phones underwent before giving Foxconn the go ahead to start producing the iPhone 6 Plus. Now an independent test has been published by Consumer Reports as noted in our video above. The iPhone 6 Plus actually fared much better than the 4.7 inch iPhone which proves that the Unboxed Therapy video was little more than an opportunistic publicity stunt.

While Unboxed Therapy was seemingly able to bend the iPhone 6 Plus, in a subsequent test that was performed by the same site host Lewis Hilsenteger on the smaller 4.7 inch iPhone 6, he wasn't able to bend it. Hilsenteger simply states in his video:

"So here we have the standard iPhone 6 and I'm going to bend it in the exact same fashion as I did with the 6 Plus. So hold in this location here and I'm going to push on the center and pull back as hard as I can and we shall see what the results are. Here we go. 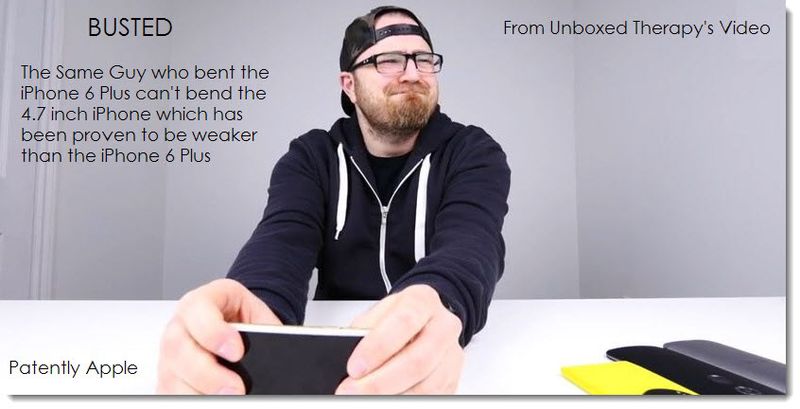 "Okay … so can put a small dent in there … no. So this one [The 4.7 inch iPhone] is far more durable. I can put a small dent I heard a little bit of sort of the glue from the screen peeling away. I can easily push that back in and device is fine, nothing wrong with the screen. That's completely useable right there."

You just have a smaller form factor here so the material isn't spanning such a large footprint I think the result of that its integrity is significantly more.

I don't see this bendgate issue affecting 6 regular iPhone 6 users in the same way that it has affected 6 Plus users. Just based on that preliminary test right there same amount of force."

In the Consumer Reports video, with real scientific testing, the truth is completely the opposite. So Hilsenteger's self-testing is bogus under such evidence. The numbers tell us that the iPhone 6 Plus is clearly stronger. So if Hilsenteger wasn't really able to duplicate the bend on the 4.7 inch as he did on the larger model, then technically he couldn't have been able to bend the iPhone 6 Plus.

Unfortunately we don't have a stress test to prove Hilsenteger's motive for his iPhone 6 Plus stunt, though I'm sure they do at Guantanamo (only kidding Lou), but that's another matter altogether.

In the Consumer Reports video noted above they also noted that the HTC One (M8) was the weakest of all smartphones tested for bending under real testing conditions. And yet in Hilsenteger's magic show, his testing result with "the same force" as he used on the iPhone 6 Plus was "not an issue with the HTC One M8."

Okay Hilsenteger, you're busted. Scientific testing done by the Consumer Reports proves you're wrong on two counts. The iPhone 6 Plus is stronger than the 4.7 inch iPhone and the HTC One M8 that you passed with flying colors was actually proven to be the weakest of all smartphones.

Any thoughts on this, send in your comments below.