Apple Pay: The Digital Wallet that will Rule the World

Apple's first electronic wallet patent application surfaced in May 2010. Our first report covering this important new development was titled "Transaction: Apple's e-Wallet App Finally Surfaces in a Patent." For Patently Apple fans, today was a very satisfying day as one of Apple's most important long-term projects finally come to life almost 4.5 years after it first came to light. It didn't come via rumors or from a self-created theories; it came from investigative work that we do week in and week out. And in the last 4.5 years we've covered every major Apple invention on this subject matter. In fact we're the only Apple site that created a special archive to cover this very important project. Today, Apple blew us away with their new digital wallet solution and service that they simply call Apple Pay.

Our extensive Archive covers large portions of Apple's master plan for an e-wallet service including the use of NFC. The NFC naysayers were many over the years. They loudly clamored that Apple would never ever use NFC because Phil Schiller didn't see a need for it.

In May of this year we made the case that Apple reached an agreement with China UnionPay for the iWallet using NFC and in August we posted a report titled "NFC is Rapidly Gaining Ground as an e-Wallet Standard. Will Apple Play Ball? And so today it was music to our ears when Eddy Cue in fact confirmed that "Apple Pay" will indeed use NFC. He noted that in one of his keynote slides as noted below.

Cue specifically noted that "NFC is the standard for all contactless payments." He also noted that Apple Pay will use a "Secure Element" which likely relates to Apple's newly  granted patent.

Another little buzz came when Eddy Cue noted that their new Apple Watch would be able to use Apple Pay wirelessly at retail establishments. That was something that we just reported on back in late August in a patent report titled "Apple Reveals Future iDevices like an iWatch with Wireless Charging Circuitry." We highlighted that wireless payments were discussed in Apple's patent.

There have been many other patents posted over the years about the coming iWallet and far too many to review in this report. Yet I wanted to point out one of the most famous patent reports that we posted on the iWallet back in 2012 titled "Apple Wins Patent for iWallet: The one that will rule the World." It was a patent discussing how the iWallet would use iTunes for listing transactions and payments. That's why today's report taps into that moment in time by updating that report title to "Apple Pay: The Digital Wallet that will Rule the World."

We noted in a report posted late last night that when the iPhone debuted in 2007 we only had about ten iPhone patents on file. Steve Jobs pointed out that there were over 200 patents supporting the iPhone. That was a about a 20:1 ratio. Today the iWallet coming to light covers about 22 patents that discuss topics such as ATM transactions, parental controls on an iWallet, security systems, shopping and beyond.

Yet we know from Steve Jobs admission that there are likely hundreds of related patents that we were unable to detect or were just too dry to report on. Yet no matter how you slice it, it's a huge victory for those who follow Apple's patent applications and granted patents throughout the year. Seeing the future ahead of time finally unfold is what it's all about.

Today is a great day for Apple as they introduced the iPhone 6 in two sizes that will debut on September 19. The iPhone's aggressive pricing shocked many, especially those reporting in Hong Kong that thought that the top tier 5.5 inch iPhone could sell for as much as $1149. At $499 it's less than half of what they forecasted. It appears that Apple is out to challenge Samsung, Xiaomi and Huawei who now dominate the top selling smartphones in China.

Today two killer apps debuted for the iPhone 6. The first was the iWallet, which is now officially branded "Apple Pay," and the second one being their new Health App. While it may take days to assess what other Apple patents came to light today, for now we can claim that it was a bonanza for the iWallet / Apple Pay.

Apple Pay is the electronic wallet application that will finally take e-commerce to whole new level of acceptance in the retail space. It will officially kick start yet another phase of the digital revolution when all that went before Apple Pay miserably failed to get the digital wallet off the ground.

At the end of the day, there's only one thing left to say: cheers to the Crazy Ones in Cupertino. What a great day of surprises! 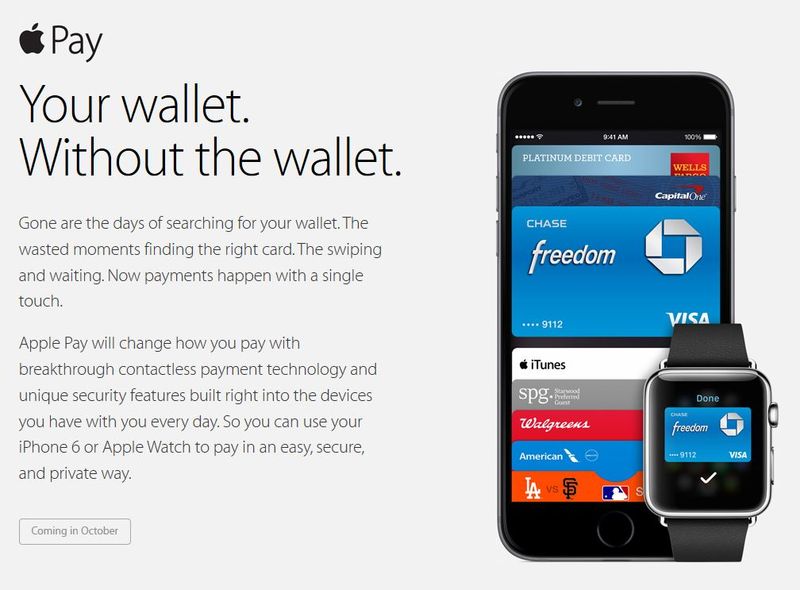