Apple is Being Sued for Infringing 13 SanDisk Patents

Ireland's Longitude Licensing Ltd and Luxembourg's Longitude Flash Memory Systems S.a.r.l. have filed a joint patent infringement lawsuit against Apple. The lawsuit involves a whopping 13 counts of infringement covering most iDevices and iPod models. The plaintiffs are using former SanDisk patents that they now own against Apple. On longitude's "About" page they note that they recently partnered with Conversant Intellectual Property Management Inc. ("Conversant") to assist in maximizing the value of our intellectual property. Interesting to note that Core Wireless sued Apple earlier this month and they're a wholly owned subsidiary of Conversant. So it's becoming quite evident that this super-patent troll has Apple in their crosshairs. With patents in hand from SanDisk and Nokia, Conversant and their partners will certainly be keeping Apple legal busy for some time.

Longitude Licensing Ltd. is a privately owned intellectual property management company that specializes in maximizing the value of patented intellectual property. Founded in July 2013, Longitude Licensing Ltd. and its affiliated companies own and manage portfolios totaling more than 6,500 semiconductor and storage solution patents and patent applications.

Longitude Licensing Ltd. operates by partnering with patent owners to manage and license patent portfolios. Affiliate Longitude Flash Memory Systems S.a.r.l. acquired from SanDisk Corporation ("SanDisk") a portfolio of patents, including the Patents-in-Suit, relating to flash memory systems. Longitude Licensing Ltd. is the exclusive licensee from its affiliated company of this SanDisk patent portfolio, with all rights to enforce the Patents-in-Suit.

Through its focus on innovation and developing cutting-edge technological solutions for the storage needs of its customers, SanDisk has established itself as the leading company in the flash memory industry. SanDisk is the worldwide market leader in flash memory products.

Since 1988, SanDisk's innovations in flash memory and storage system technologies have provided customers with new and transformational digital experiences. Throughout its history, SanDisk has pioneered the use of flash memory technology. In 1991, SanDisk (then called "SunDisk") began shipping the world's first flash-based SSD, more than a decade before flash SSDs were widely used. Similarly, in 1999 SanDisk introduced the first high volume memory with Multi- Level Cell ("MLC") technology which doubled the amount of data stored in each memory cell. In 2013, SanDisk celebrated its 25th anniversary and a quarter century of innovation, research and development in flash memory.

SanDisk's investment in memory technology has also yielded an extensive patent portfolio. At the end of the 2013 fiscal year, SanDisk's investment in memory technology had generated a portfolio of more than 2,600 U.S. Patents. And SanDisk holds more than 4,900 patents worldwide. SanDisk's patent portfolio has been licensed by several leading semiconductor companies and other companies in the flash memory business. In early 2014, SanDisk reached a milestone of recognizing over $4 billion in cumulative licensing and royalty revenue.

The Lawsuit Files 13 Counts of Infringement against Apple 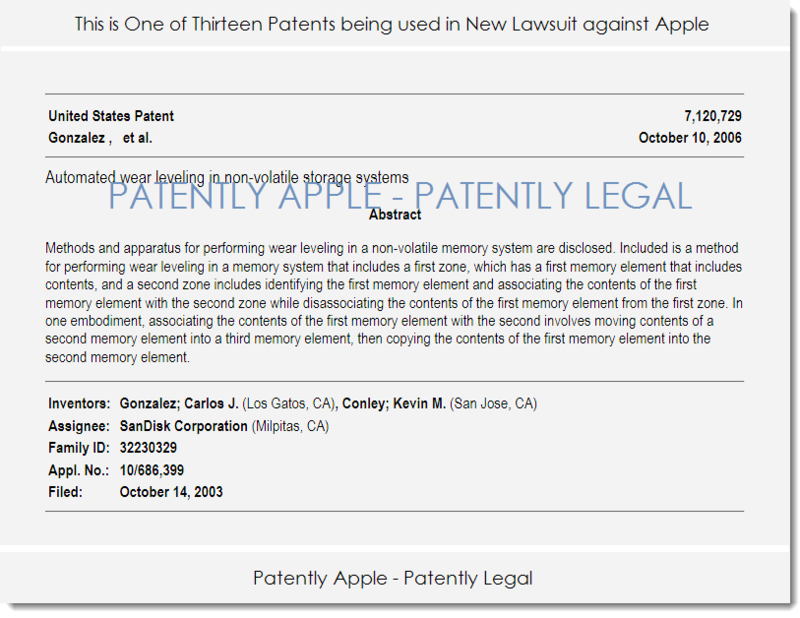 The patent infringement case presented in today's report was filed in the California Northern District Court, San Francisco Office The Presiding Judge in this case is noted as being Judge Elizabeth D. Laporte.