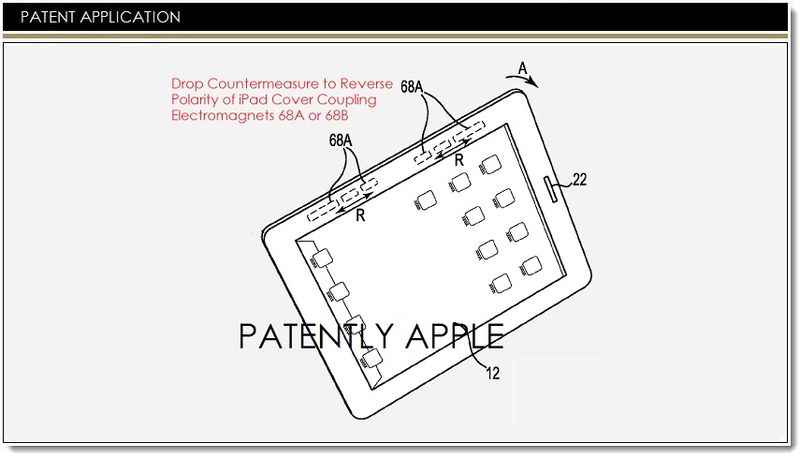 Over the years of covering Apple's patent applications we've learnt that in many instances Apple has different teams working on a single problem from different angles in order to find the right solution prior to bringing it to market. Last March we posted a patent report titled "Apple Invents Unique Protective Mechanisms for Future Devices." Then last October we posted another report on this subject titled "Apple Advances their Device Free Fall Protection Invention." Today the US Patent & Trademark Office published a patent application from Apple that reveals how this project is progressing in interesting new areas. Today's invention introduces us to drop countermeasures that could be added to future versions of Apple's iPad Smart Cover and Smart Case to shield the iPad from damage to vital components or its display when accidentally dropped. Apple also discusses new drop countermeasures designed for the iPhone.

In use, modern electronic devices are subject to a wide range of different environmental effects, including temperature extremes, humidity, physical contamination, and potential loss or damage due to physical hazards including dropping, shock, compression and impact. These considerations can be particularly relevant to portable electronic and mobile device applications, where sensitive control and display components may be exposed to the external environment, increasing the risk of damage due to accident or misuse.

The countermeasure system may include an actuator coupled to an actuated member, where the actuated member is operable by the actuator to modify the impact geometry. As a result, impact energy can be redirected from an impact sensitive component of the electronic device to an energy absorbing component of the electronic device.

Apple's iPad Smart Cover may one day be granted more intelligence. One of Apple's examples of reducing iPad damage in a fall is covered in patent FIG. 8 below which is a perspective view of an iPad with cover system #60 in an ejected position.

In this configuration, the iPad is operable to eject the iPad cover by reversing the polarity of cover coupling electromagnets 68A or 68B, or by repositioning or rotating (flipping) internal magnets 68A and/or magnets 68B. 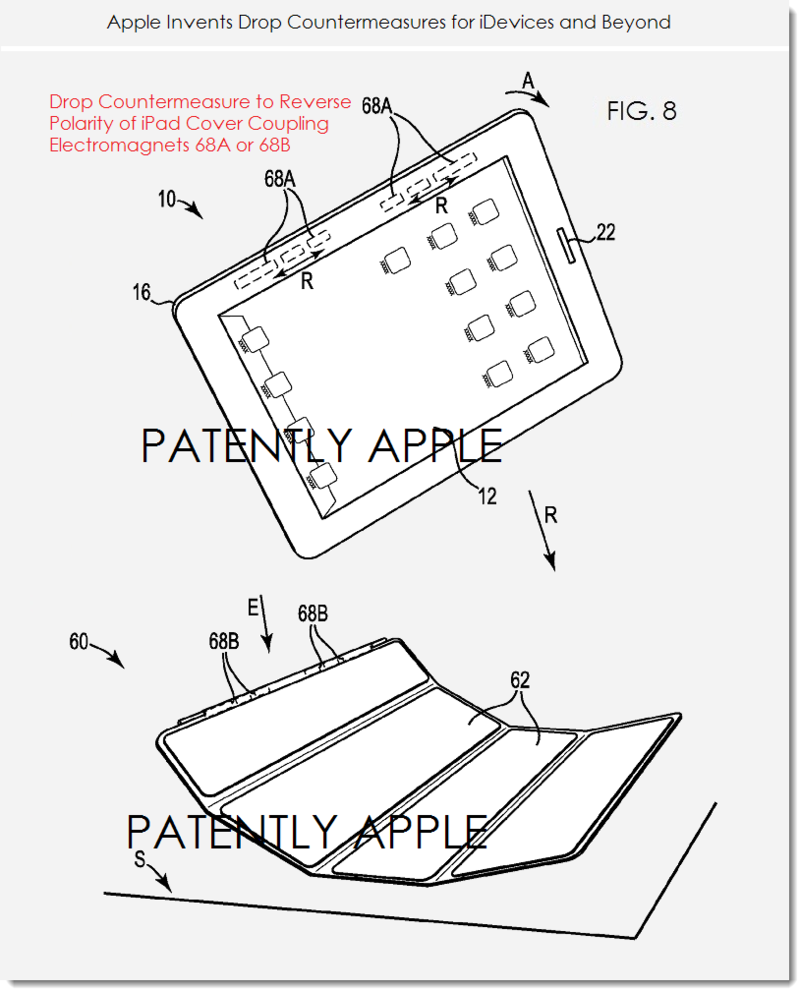 Based on the "orientation A" of the iPad and the proximity of any potential "contact surface S," the iPad's cover can also be ejected so as to reach the surface (like a floor) before the iPad, redirecting impact energy away from iPad's cover glass and other sensitive components by cushioning the impact of the iPad with its cover.

Additional drop damage mitigation techniques are also contemplated. For example, audio devices such as speakers on the iPad (#22) can be driven or actuated to generate one or more air pulses prior to impact. In this configuration, audio devices 22 may act as an air brake to reduce impact velocity, for example when utilized just prior to a face-drop type impact. 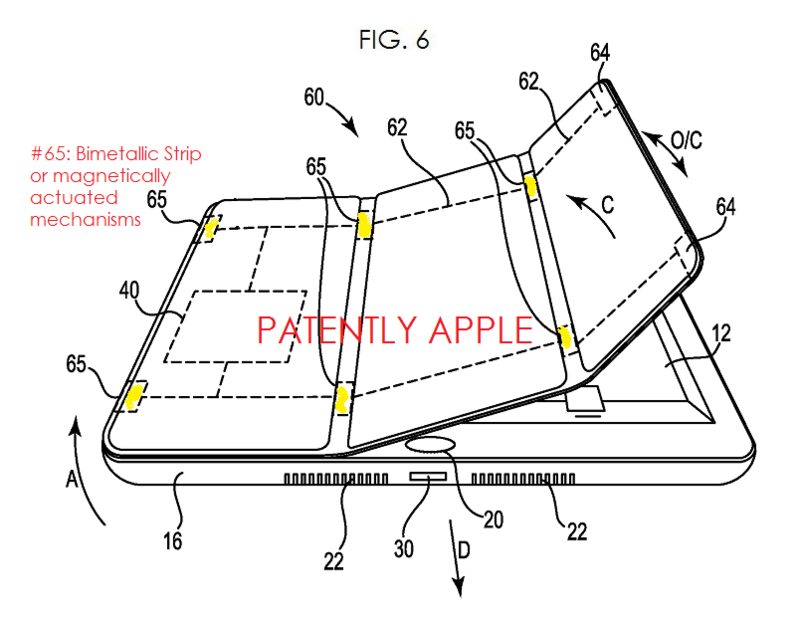 Cover actuators #65 may be located between cover panels as noted above. Alternatively, bimetallic strip or magnetically actuated mechanisms #65 may be provided, utilizing an electric current or voltage signal to generate or reverse a biasing force between adjacent cover panels or between a cover panel and the iPad's housing #16, in order to open or close one or more cover panels automatically. 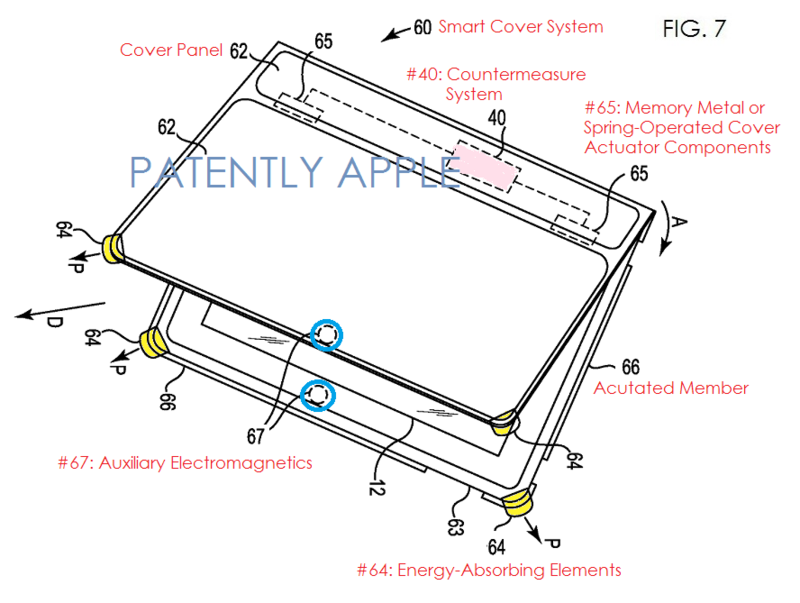 A future iPad Smart Case countermeasure system #40 includes actuated components #65, and cooperates with sensor and processor components in the iPad and/or cover #60 to open or close cover panels #62 based on a drop event or other potential hazard, as described above.

In some designs, the future smart case system may also include actuated members #66 in one or more back or side panels. On or more ring-type actuator elements 66 may be configured to deploy prior to impact, so that impact energy is redirected away from the iPad and cover glass into energy-absorbing components #64 in ring actuator 66. Suitable deployment mechanisms for actuator elements include spring bias, electromagnetic, and pneumatic actuators.

In some applications, a magnetorheological (MR) fluid may also be utilized, whereby the damping and energy-absorption characteristics of individual members #64 can be selected based on the velocity and orientation (or attitude) of the iPad and other impact geometry data, for example using a magnetic signal to alter the viscosity of the MR fluid.

One or more energy absorbing elements may also be formed of a durable energy-absorbing material such as fiberglass, a rubber or silicon based material, or a composite material with suitable damping and shock absorbing properties.

According to Apple, the new drop countermeasures that are contemplated could apply to a wide range of products such as future MacBooks, game players, an iMac and an iPhone.

Apple's drop countermeasure techniques relating to future iPhones have to be different as it's not protected by a smart cover system. The countermeasure system noted below is configured to mitigate damage from dropping, impact, and other accident or misuse.

In this particular configuration, for example, countermeasure system includes a gyro, accelerometer, magnetic sensor, or other motion sensor (g) #42 for sensing motion of the iPhone's housing and memory I/O controller (.mu.p) #44 for determining or predicting impact geometry, based on motion. The countermeasure system may also include one or more cameras or other proximity sensors.

In operation of the countermeasure system, actuator or actuated mass (a/m) #45 is operable to reduce or mitigate impact damage to the iPhone. In particular, the actuator may be operated to change the impact geometry by repositioning the actuated mass to alter the attitude of the iPhone's housing or by reconfiguring or actuating a component of the housing. As a result, impact forces and impact energy may be redirected from sensitive components of the iPhone to energy absorbing components.

Apple's patent FIG. 2 noted below is a block diagram illustrating various internal and external components of a future iPhone, including the drop damage mitigation and impact countermeasure system. 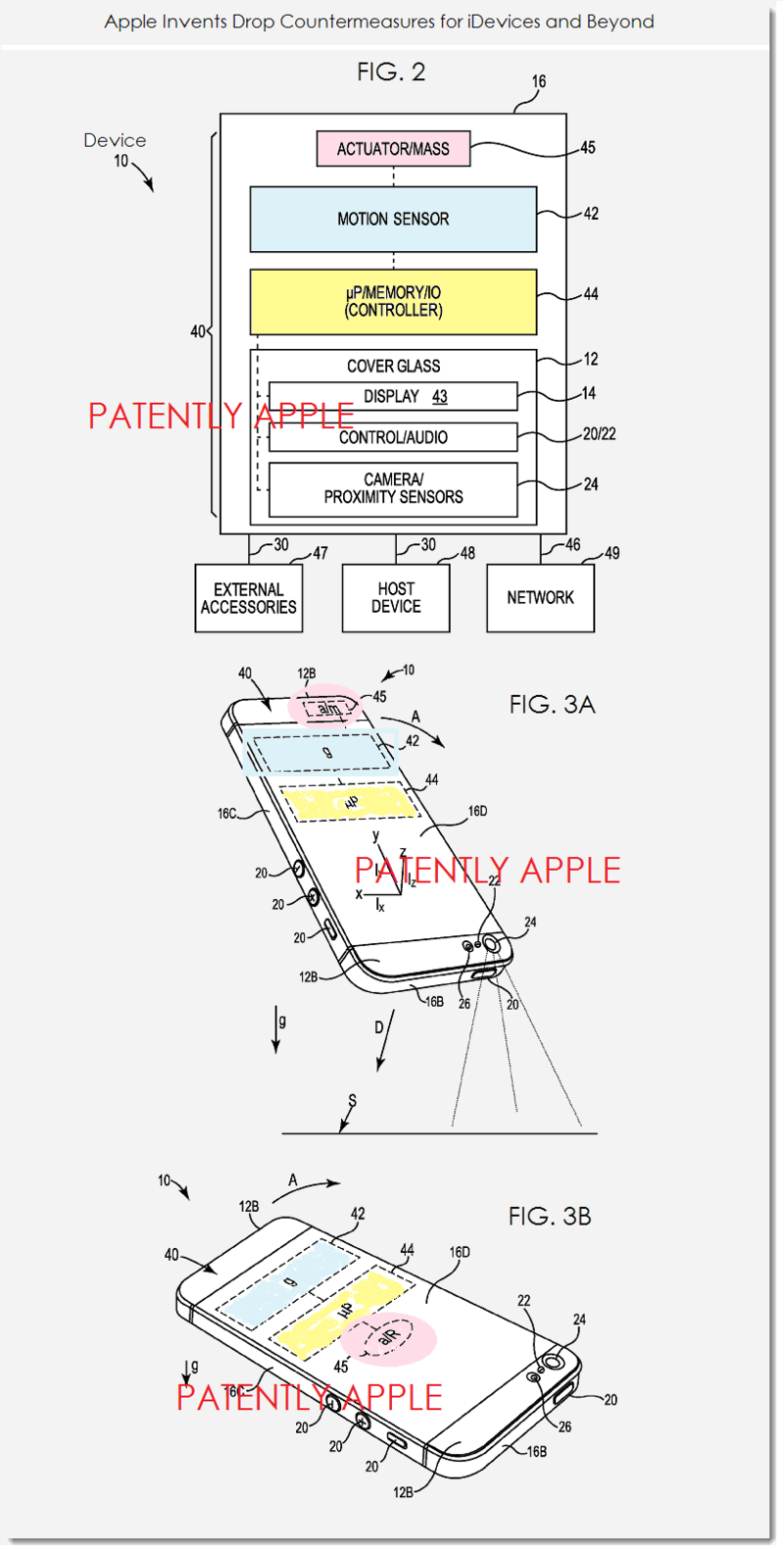 In Apple's patent FIG. 3A noted above we're able to see a perspective view illustrating a momentum-coupled drop damage mitigation or countermeasure system for an iPhone with a proximity sensor #24. As shown in FIG. 3A, the iPhone may experience a dropped or falling condition in direction D, with arbitrary three-dimensional rotational attitude A. The direction of motion (D) and attitude (A) may be determined with respect to local gravitational field vector g or potential impact surface S, or based on another arbitrary reference system.

In this particular example, the countermeasure system includes a gyro, accelerometer, or other motion sensor (g) (#42), processor (.mu.p #44), an actuator/actuated mass (#45) and a proximity sensor. The processor determines attitude A, and motion D, including velocity and angular rotation data, based on signals from one or both of proximity sensor and the motion sensor.

For example, the motion sensor may provide angular rotation and acceleration data with respect to local gravitational field g, and proximity sensor 24 may provide position, velocity, and attitude information with respect to potential impact surface S, or other external reference. Suitable technologies for the proximity sensor include general-purpose cameras and other dedicated-use proximity detectors, for example, infrared, optical, and ultrasonic systems.

Alternatively, one or more audio components (#22) may be utilized for proximity detection, for example by emitting a chirp or ultrasonic pulse, and determining height, speed, and orientation based on the reflected signal or "bounce" from nearby surfaces. Potential ultrasonic or audio sensing techniques could utilize data not only from the ground or other impact surface, but also signals from walls, ceilings, furniture, and even the user or other nearby objects.

Apple credits Carl Peterson – Apple's iPad Product Design manager, Justin Wodrich – Apple's Finite Element Analysis (FEA) Expert, Kevin Gibbs and Samuel Smith as the inventors of patent application 20140253284 which was originally filed in Q1 2013. Considering that this is a patent application, the timing of such a product to market is unknown at this time.