Apple invents a Visual Reminder System for the iPhone & More 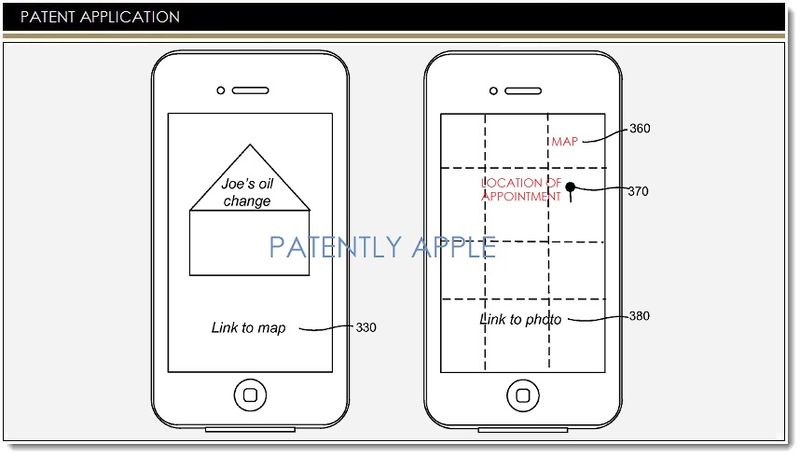 On September 4, 2014, the US Patent & Trademark Office published a patent application from Apple that reveals a new visual reminder system for the iPhone that could incorporate pop-up maps as a handy reminder of the location of your appointment. Our report also provides you with links to several other mildly interesting patents published today covering varying technologies. One is about an interesting sapphire process (which we covered earlier in a European filing weeks ago) to strengthen the material. The others cover camera related technologies, integrated pressure sensors for displays and a way to make mobile device displays even lighter and brighter. The last one covers a possible new Maps UI that will use a new virtual reality gimmick allowing users to experience a form of X-Ray vision effect.

Apple has invented a visual reminder system for the iPhone. As an example Apple notes that a person may want to set a reminder to get an oil change for their car. To accomplish this, a user might enter an appointment into a calendar for a particular time/date, and enter the text "get oil changed" as the message to be displayed when the date/time is reached. But, once the user gets such a reminder, the user has to select a place to get an oil change, which might involve remembering where the user got the last oil change. Also, it is typical that a user would think of setting such a reminder when the only computer available is a mobile phone (or other relatively small mobile device), thereby forcing the user to perform many input commands.

Embodiments can use images to improve setting reminders and the usefulness of reminders. For example, a mobile device can provide an option for the user to request a reminder that uses one or more images obtained from a camera. The user can then provide a time period for the reminder, and the image can be provided to the user when the time period is reached.

The image can provide information about the reminder as well as a visual depiction, which can cause the user to remember the location. The image can also be analyzed to provide the content of a message (e.g., text can be identified in the image and then inserted into the message). The message can be provided instead of or in addition to providing the image. Additionally, a location can be detected in conjunction with capturing the one or more images, and the location can be used to form a reminder message.

In one embodiment, after the user requests an image-based reminder in conjunction with capturing an image (e.g., a photo or a video), a location can be detected corresponding to the location of the one or more images. In this way, when the reminder goes off, the location and image can both be provided to the user.

The location could be provided on a map or a photo provided to remind the user of the location. Furthermore, the user does not have to enter the location, but the mobile phone (or a server connected to the phone) can automatically determine the current location of the phone when the reminder is set. In this way, someone can set a location-based reminder by simply stating "remind me to come back here in two months," where the image can convey the purpose of the task. The time period could be specific as an interval (e.g., 3 months) or using a specific date (e.g., January 15). The location can also be used to identify a type of store at the location (e.g., using keywords), and pre-made messages can be set for the reminder, thereby allowing the user to simply take a photo (with an associated location obtained), and not have to enter a message.

A user could also just say Hey Siri "remind me to come back here in two months," and the device would use GPS (or other method) to obtain the location and store the reminder with the time setting.

A database could be accessed to determine that the location is associated with an oil change place, and an automatic message can be set indicating that the oil needs to be changed when the time period is reached.

In Apple's patent FIG. 1A below we're able to see an iPhone with a user interface to create an image-based reminder. The iPhone shows an image 110, e.g., from a photograph or a video. More than one image may be shown, e.g., in a tiled display. The image may be displayed just after the image was captured using the iPhone's camera. 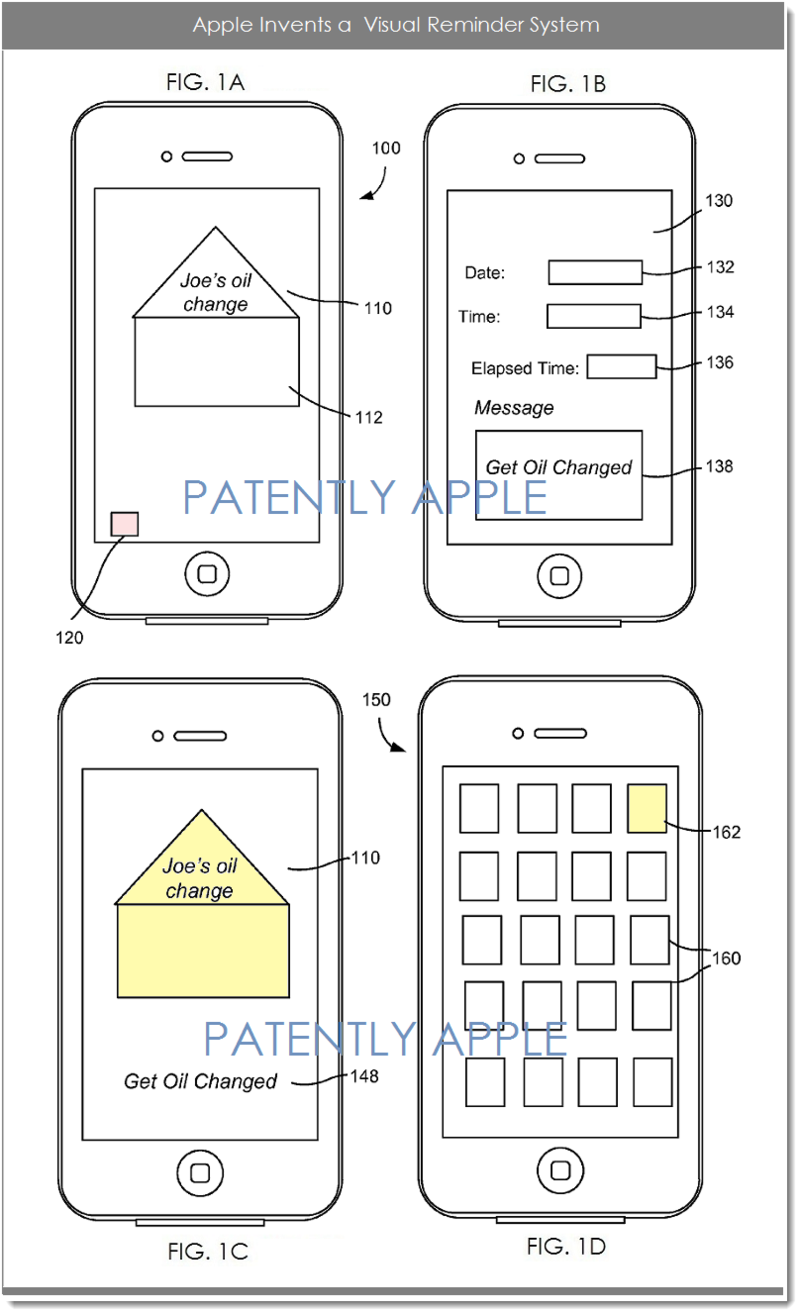 As another example, the user input object could include text to indicate an association with the image-based reminder function. In another implementation, the user input object can also be a voice-activated object. Instead of displaying an option on a screen with the image, other embodiments can display a prompt on a screen by itself or with other options from the camera. For example, the prompt might ask "Do you want to add your photo to a reminder?" 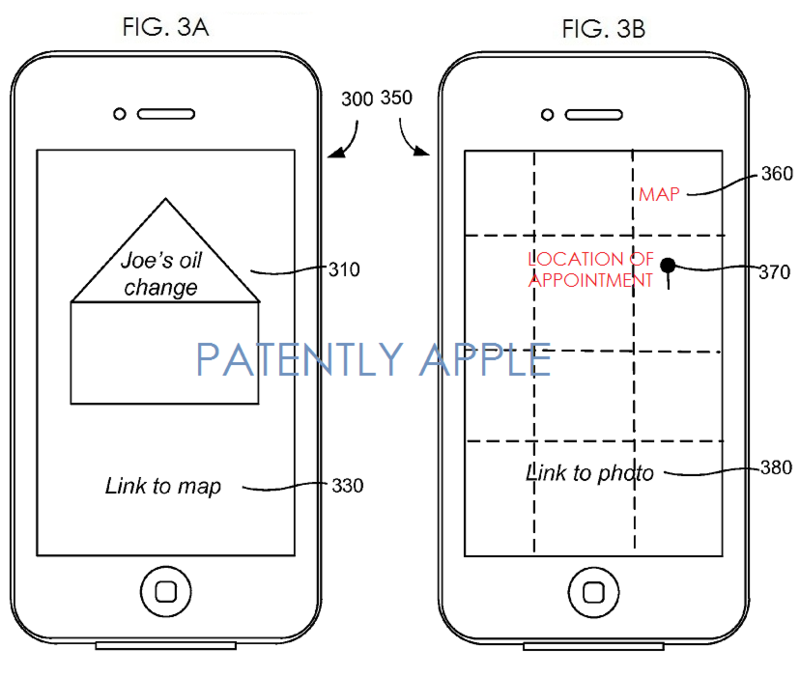 Apple's patent FIG. 6A below shows us a device 600 including a database table 620 that stores messages associated with keywords according to embodiments of the present invention.

Apple credits Swapnil Dave and Kaustubh Rao as the inventors of this patent application which was originally filed in Q1 2013. Considering that this is a patent application, the timing of such a product to market is unknown at this time.

Prior to Apple's big event next week, there was only a trickle of patents published today of interest. Some Apple fans might find some of the following patent applications of mild interest.

1. Display with Dual-Function Capacitive Elements: According to Apple, their invention covers a display with integrated touch sensing capability that may be manufactured using fewer parts and/or processing steps which could result in the display itself being thinner and brighter. For more on this see patent application 20140247247

2. Sapphire Property Modification through Ion Implantation: On August 22 we posted a patent report titled "Apple Reveals a Multi-Step Process to Strengthen Sapphire Glass in a New European Patent Filing." Today that patent has surfaced in the US under patent application 20140248472.

3. Photodiode with Different Electric Potential Regions for Image Sensors + Exposure Control for Image Sensors: Apple always upgrades the iPhone camera and so this pair of new Apple inventions might interest camera buffs. You could find them under patent applications 20140246568 and 20140247378.

4. Display Integrated Pressure Sensor: A touch sensitive device that can detect the amount of pressure being applied to a touch screen from a user or other external object is provided. Apple's patent application is an in-depth view regarding the technology behind this feature though isn't very forthcoming as to how this feature will be used. Technically it would be able to detect the difference between a touch and a stylus. Theoretically it could be used for gaming actions. For more on this see Apple's patent application 20140247239.

5. Two Mapping Inventions: Both of these patent applications cover a new Maps UI dimension that could represent a 3D model with augmented reality. Apple states that "Essentially, in one embodiment, once the virtual model has been properly aligned with the real-world image, the mobile device's user can exercise a form of "x-ray vision" relative to the world shown on his mobile device's display."

This is really done via a video and not by any Superman-centric technologies. Apple notes that "In one embodiment, after the virtual model has been aligned with the pixels in the real-world image, the mobile device user can use the mobile device's touchscreen interface to interact with the image and modify the image. For example, the user might interact with the image in the manner that causes a wall of a building to vanish or "peel away" so that the user can then view the wire frame structure of the building's interior.