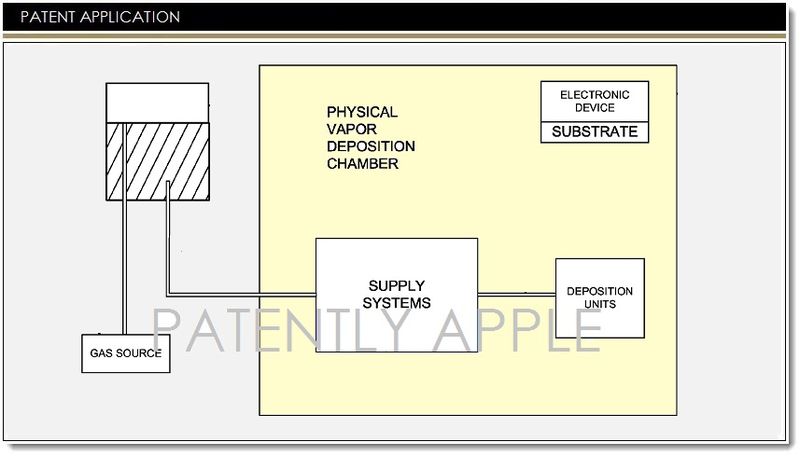 Buried in a sea of Apple patent applications that were published earlier this week by the US Patent & Trademark Office, an Apple invention for an alternative method for strengthening sapphire glass came to light. On September seventeenth I posted a report titled "LG Wins Contract for AMOLED Apple Watch Displays & Apple Fulfills Patent," which showed that the new Apple Watch was using a new patent pending sapphire glass strengthening process that we first covered in a report in August using ion steaming. In Apple's latest patent pending invention, we see that a secondary engineering team has worked on an alternative sapphire glass strengthening process. Whether their new process will work itself across the entire Apple Watch family over time or is being aimed for future cover glass applications for the iPhone and iPad is unknown at this time.

Apple tells us in their patent background that corundum is a crystalline form of aluminum oxide and is found in various different colors, most of which are generally referred to as sapphire. Sapphire is a hard and strong material with a hardness of 9.0 on the Mohs scale, and, as such, is capable of scratching nearly all other minerals. Due to its brittle nature, it is susceptible to dramatic strength reductions as a result of small defects caused by interactions with its environment. Therefore, while a sapphire part may be very reliable leaving the factory, after time and use it may become less reliable due to an accumulation of minor damage.

Additionally, producing defect free parts can be very challenging. Brittle materials' strength are limited by the flaw population on the surface. An inconsistent or inadequate surface finishing can lead to very weak parts. Glass is chemically strengthened to a significant depth to minimize the effect of these flaws, but on extremely hard materials such as sapphire, a similar process is not readily available. For example, the sapphire's hardness makes cutting and polishing the material both difficult and time consuming when conventional processing techniques are implemented. Further, conventional processing tools such as cutters experience relatively rapid wear when used on sapphire. This further increases the resource demand when surface finishing sapphire parts.

Additionally, the use of parts formed from different materials, such as sapphire and glass, glass and plastic, sapphire and plastic, and so on, in devices can lead to differences in the optical appearance of side by side components due to the high reflectance of sapphire. Between two materials having particularly strong differences in reflectance the effect can be very noticeable.

Apple's invention generally relates to surface coatings on substrates. In particular, the patent application relates to coatings which strengthen the underlying substrate for use as a window on an electronic device, such as mobile phones and computing devices.

Apple later expands on the devices that their new invention could apply to, which includes: "tablet computer, notebook computer, instrument window, appliance screen and the like. Additionally, the device may include non-electronic devices such as mechanical watches which utilize a similar hard window."

Apple's invention covers systems for strengthening a sapphire which encompass a substrate having a first surface and a second surface with a plurality of surface defects. 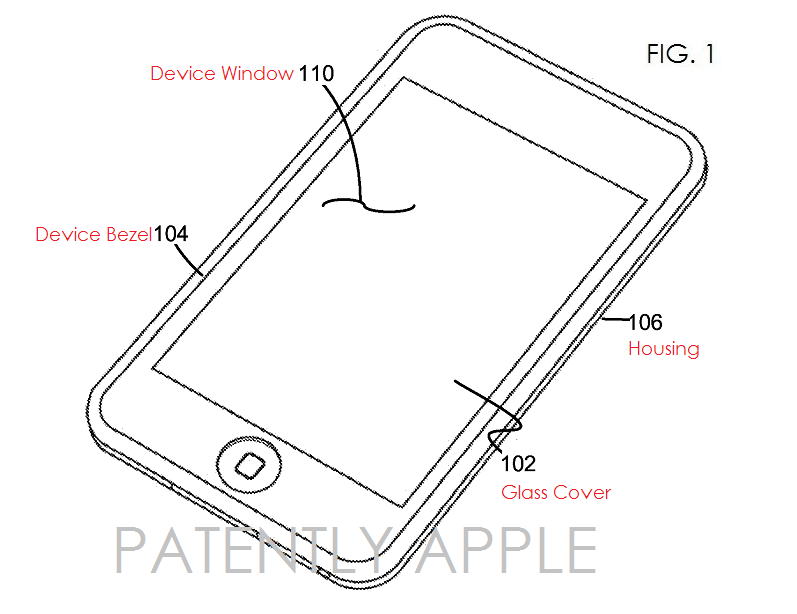 Apple's patent FIG. 1a above illustrates an iPhone which may utilize a hard substrate as a window. A "hard" substrate is one that is generally scratch resistant, or more particularly one that has been treated to be more scratch resistant than the same material in an untreated form. For example, sapphire and alumina may be the same chemical composition of Al2O3. However, based on structural differences, alumina may have a slightly reduced hardness compared to sapphire's Mohs hardness of 9.

The iPhone may include cover #102 with a bezel #104 about all or a part of its outer periphery (e.g. edge) where bezel 104 is couplable to housing #106 in a manner that secures the cover to the iPhone (or other device). Depending on the application, the bezel and the housing may be formed of a variety of different materials including, but not limited to, polymer materials (e.g. plastics), metals (e.g. aluminum, steel, etc.), amorphous glass materials (= liquid metal), composite materials, and any combination of the noted materials.

The cover may include a variety of components for viewing the display of the iPhone (and/or other device). The particularly cover noted on the iPhone may have window #110 which may be a sapphire substrate provided to protect the components of cover 102 from damage.

In accordance with various embodiments, the window #110 may be manufactured from any of a variety of different materials. The materials may include transparent polymer, amorphous glass, and/or transparent crystalline materials.

The window generally may be formed from any of a number of extremely hard translucent materials. For example, extremely hard translucent materials may include sapphire. While sapphire's inherent strength is higher than that of amorphous glass (liquid metal), there is no well-established process to provide significant strength improvements after mechanical shaping, like chemical strengthening imparts to amorphous glass. Failures in sapphire are typically driven by propagations of surface defects under stress.

Consistent heavy use of a device such an iPhone having a sapphire protective substrate may cause defects in the surface. Even in the absence of environmental damage to the substrate, the substrate is unlikely to be manufactured flawlessly so surface defects are likely to be present. 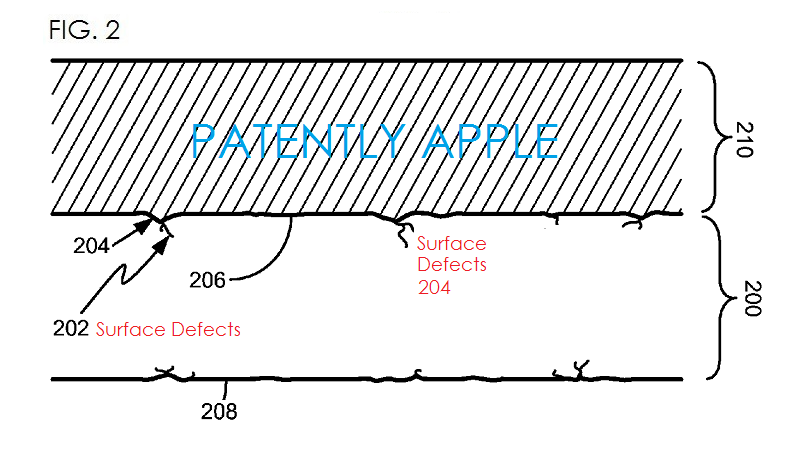 Apple notes that the coating may form a layer suitable to control distortions of the surface that could otherwise cause the defects (e.g. defects 202/204) to expand and cause failure of the sapphire substrate. By sealing the substrate surface defects the weakest points on the surface are reduced and/or eliminated. Sealing the defects helps prevent force from directly impacting the defects and causing additional damage. Creating a uniform layer puts a barrier between destructive external force and the stress risers in the defects.

The barrier may have the effect of spreading out the force of an impact and limit the localized stress at the defect. Various embodiments may employ silicon oxynitride (SiON) as a coating, while others may use alumina, and still others may use a combination of the two.

A less brittle surface may not suffer the damage that a more brittle surface may suffer (e.g. damage penetrates to a shallower depth). Less damage in the coating layer results in fewer defects capable of expanding into failure of the bulk substrate. In response to potentially damaging contact with the surface, the protective layer may absorb the damage and therefore allowing the substrate to maintain its high strength. In accordance with various embodiments, SiON and/or alumina may be a useful material for forming a protective layer.

The different structure may affect the hardness, strength, and/or optical properties of the final part. The deposition of the coating materials varies by process, with the specific conditions, including the atmosphere, the temperature of the substrate and chamber, the pressure, presence, ratio, type and energy of additional energetic ions, the deposition rate and the condition of the applied coating material, all contributing to the final structure, composition and density that can affect the various material properties. 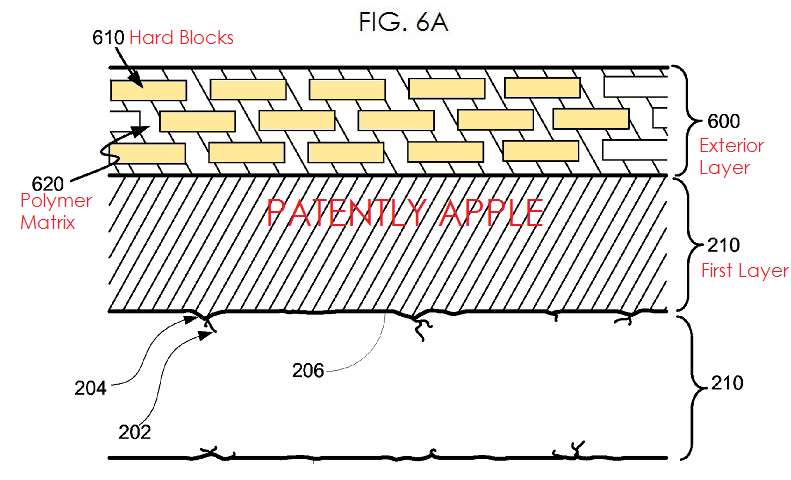 The effect of this structure is that, when applied as a surface, the exterior layer may provide the strength, feel and/or hardness properties of the hard blocks but have the flexibility of the polymer matrix. Providing a number of rows of the hard blocks in the polymer matrix may create a layer that possess sufficient rigidity (and other mechanical properties) to be utilized as a substrate in many applications, such as for use as a replacement for a cover glass in an electronic computing device. 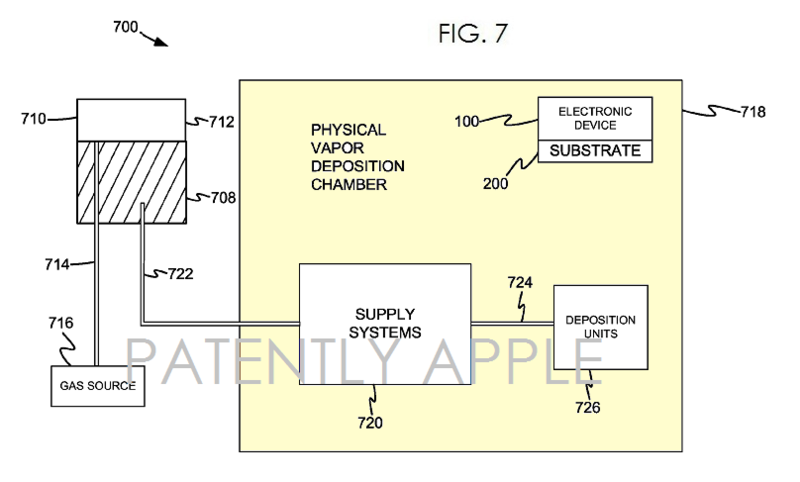 Apple's patent FIG. 7 illustrates a schematic view of surface processing apparatus for applying a surface treatment to a substrate.

A uniform coating may be applied to both the sapphire and plastic portions of the mobile device. The coating or film may be chosen to ensure both parts, once the film is applied, have a relatively uniform specular and/or diffuse reflection, thereby optically matching this aspect of the materials to one another.

Apple's patent was originally filed on March 14, 2014 and published this week by the US Patent and Trademark Office. Considering that this is a patent application, the timing of such a product to market is unknown at this time.