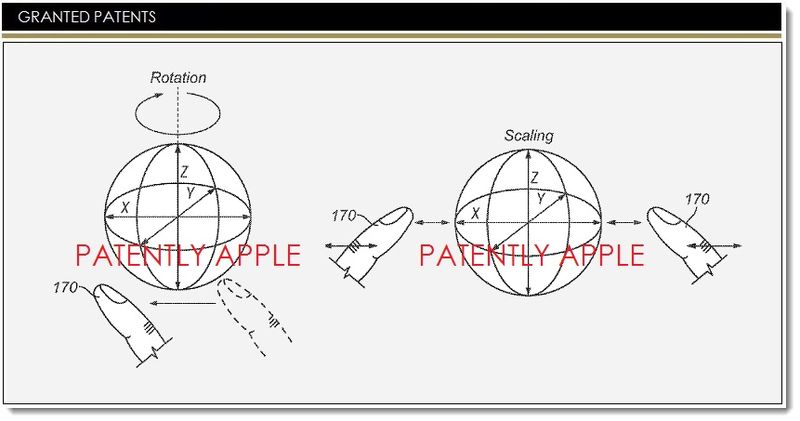 Apple's first invention relating to a 3D holographic display was back in 2008. Today the US Patent and Trademark Office officially published Apple's second granted patent in this field but takes it to a whole new level aiming for an interactive holographic display for Macs and iDevices like an iPhone or iPad. Apple notes in their granted patent that "The mobile telephone, media player and personal computer can provide a three-dimensional viewing and interacting experience, without the requirement of a reflective medium or wearing 3D glasses. Accordingly, a truly unobtrusive interactive three-dimensional holographic display can be provided."

Holographic displays are used to display objects in three dimensions. Typically, a three-dimensional image requires a medium (e.g., spinning mirrors, steam, hot air, etc.) onto which the image is projected. However, conventional holographic imaging devices are not capable of providing a holographic display without the need of a reflective medium.

Moreover, many types of interactive devices are available for performing operations in a computing system. Interactive display screens (e.g., touch screens, in particular) are becoming increasingly popular because of their ease and versatility of operation as well as their declining price. Touch screens generally allow a user to perform various functions by touching (e.g., physical contact or near-field proximity) the touch sensor panel using a finger, stylus or other interactive object at a location dictated by a user interface (UI) being displayed by the display device.

Information regarding whether an interactive device (e.g., a stylus or a user's finger) interrupts the one or more beams can be obtained, and a location of the interactive device can be determined with respect to the holographic image, based on the obtained information. 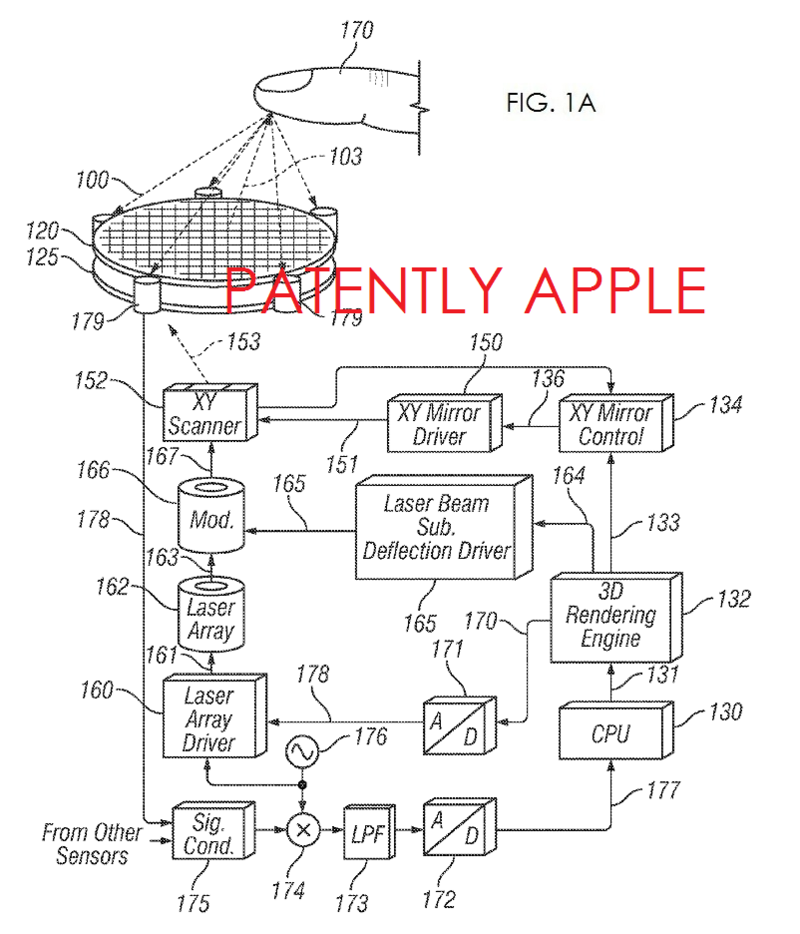 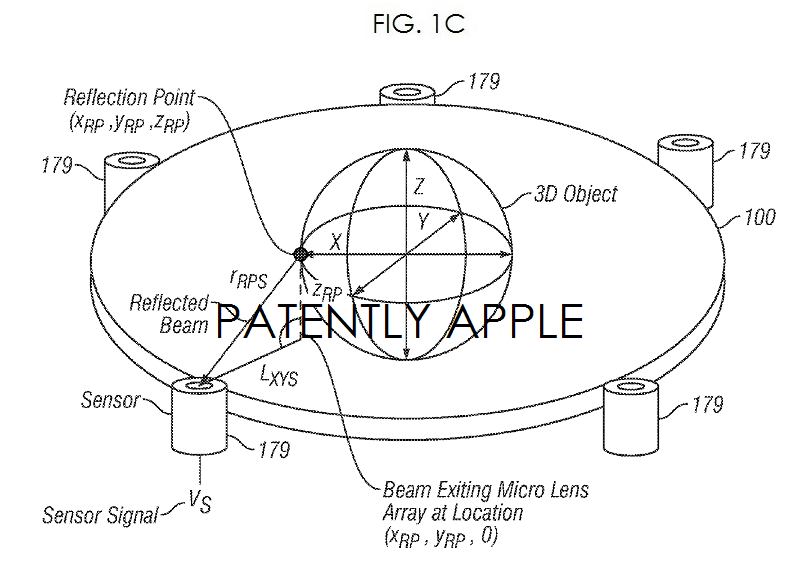 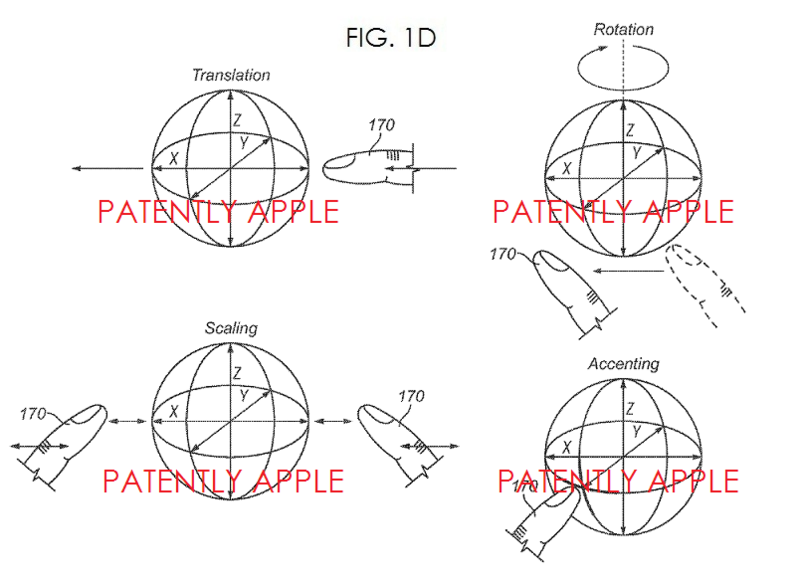 Apple's patent FIG. 2A shows us a detailed side view of a path of a beam. It shows the mirror and lens arrangement for one exemplary embodiment along the x-axis of the micro-lens array. 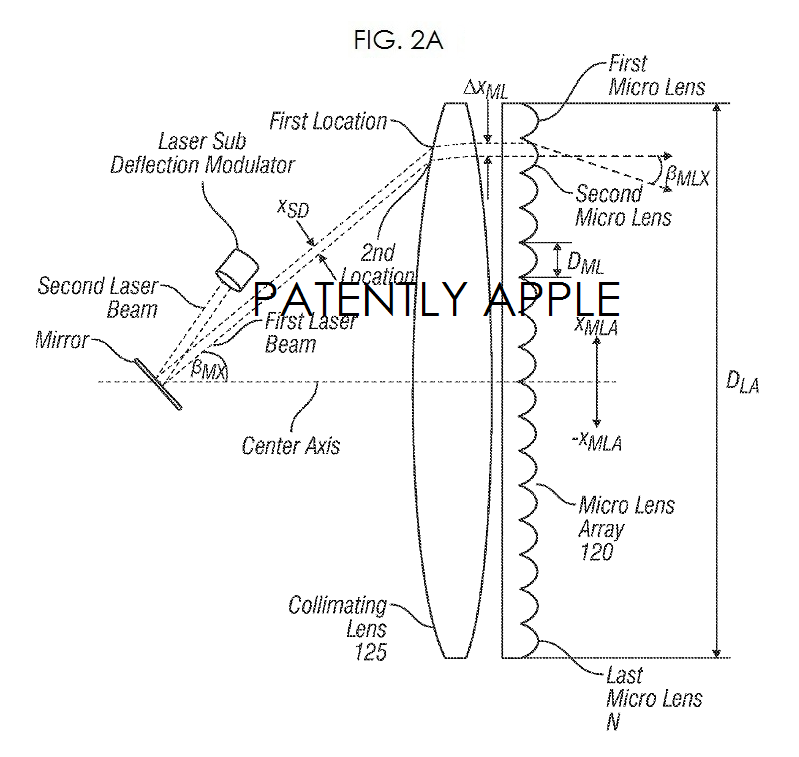 Apple's patent FIG. 2C below illustrates an exemplary beam steering cell with an integrated light source, according to one disclosed embodiment. Each beam steering cell can be composed of the following components: a light source, such as a VCSEL (Vertical Cavity Surface Emitting Laser) 200; a collimating lens 210, which can minimize the divergence of the laser beam; a liquid crystal cell 220 with a polarizer 230, which can vary the intensity of the light emitted by the VCSEL. The liquid crystal cell 220 depicted in FIG. 2C is composed of Indium Tin Oxide (ITO); however, it is noted that various other transparent materials may be employed without departing from the scope of this invention.

a lens assembly 240 (a hydrophobic lens is depicted for exemplary purposes), which can control the refraction of the intensity modulated laser beam. As noted above, ITO is used to form the lens assembly 249; however, it is noted that various other transparent materials may be employed without departing from the scope of the present disclosure. 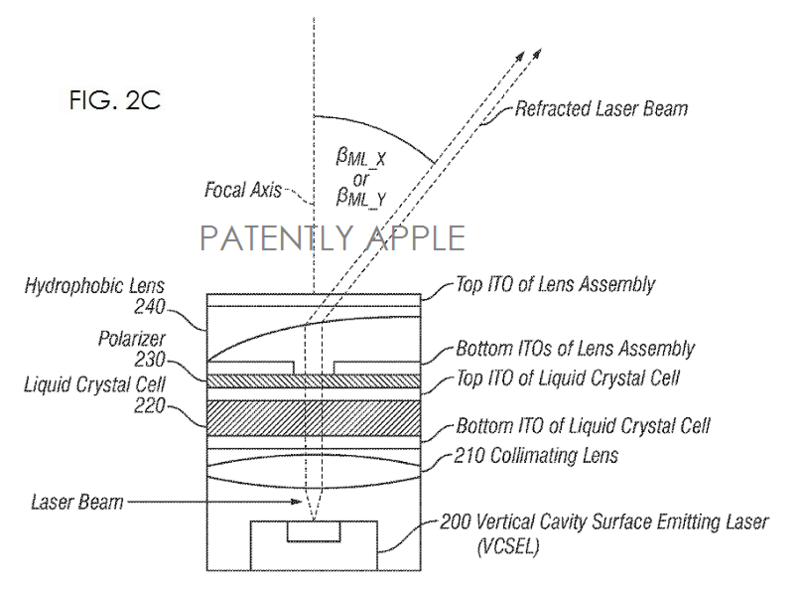 Apple credits Christopher Horst Krah as the sole inventor of granted patent 8,847,919 which was originally filed in Q1 2011 and published today by the US Patent and Trademark Office.