The US Patent and Trademark Office officially published a series of 34 newly granted patents for Apple Inc. today. In this particular report we cover a single patent regarding a possible future infrared system for iOS cameras. On one hand the technology could turn your iOS device into a kind of automated tour guide for museums or cityscapes as well as eventually being an automatic retail clerk providing customers with price, availability and product information. It's an angle that might work very well with "Apple Pay" in the future. On the other hand, there's a controversial aspect to this invention and our report will tell you why. We wrap up this week's granted patent report with our traditional listing of the remaining granted patents that were issued to Apple today.

Apple has been granted a patent today for their invention relating to systems and methods for receiving infrared data with a camera designed to detect images based on visible light.

Apple's patent FIG. 6 is a perspective view of an illustrative screen for configuring an electronic device to receive infrared data. 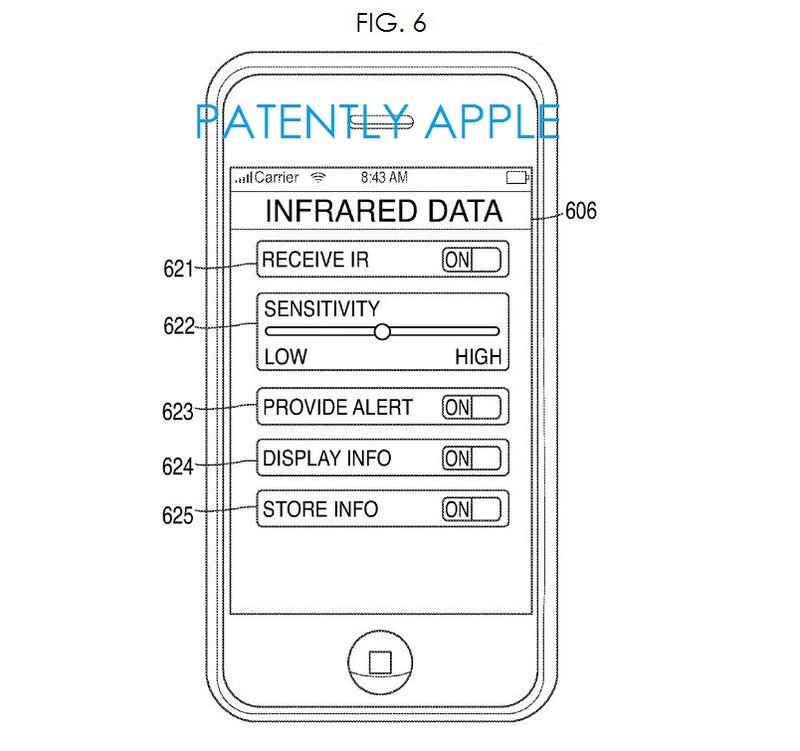 Based on the decoded data, a device can display information to a user or modify an operation of the device. In some embodiments, a device can, based on received infrared data, display information to a user relating to an object near the user. For example, an infrared emitter can be located near an object and generate infrared signals with encoded data that includes information about that object. An electronic device can then receive the infrared signals, decode the data and display the information about the object to the user. An example of this is found in patent FIG. 4 covering an automated museum guide application.

Apple's patent FIG. 4 is a perspective view of an illustrative system for communicating infrared data. For example, if a museum includes multiple exhibits in a room with a transmitter for each exhibit, it may be advantageous to employ transmitters that generate directed beams of infrared light so that the cameras do not receive infrared signals from multiple transmitters. On the other hand, if a museum includes a single exhibit in a room, it may be advantageous to employ one or more transmitters that generate strobes of infrared light so that all cameras in the room can receive the infrared signals. 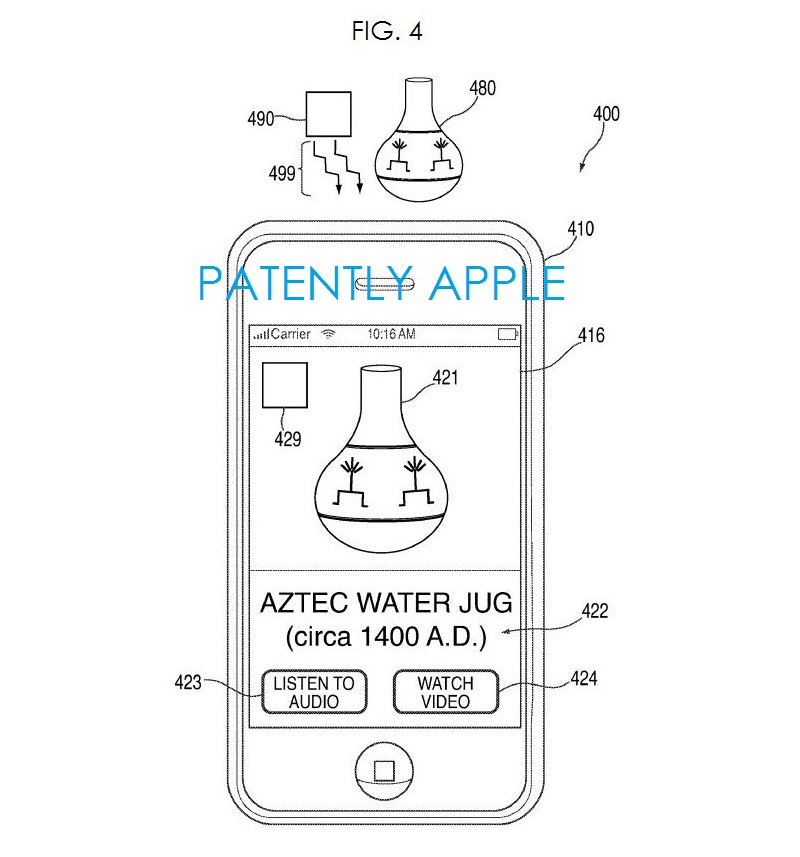 Apple makes it clear that their infrared system could obviously work in differing environments beyond tourist attractions. It could be applied to a retail environment so as to inform users of retail information on any given item in the store such as price, availability, discount status or any other relevant data that the retailer thinks will assist their customers in making a decision to make a purchase. In theory, this could be something that could one day tie into Apple's all new mobile wallet application called Apple Pay.

Disabling a Camera in Secret Facilities and Concerts

In some embodiments, Apple notes that a device can, based on received infrared data, disable a function of the device. For example, an infrared emitter can be located in areas where picture or video capture is prohibited, and the emitter can generate infrared signals with encoded data that includes commands to disable the recording functions of devices. An electronic device can then receive the infrared signals, decode the data and temporarily disable the device's recording function based on the command. 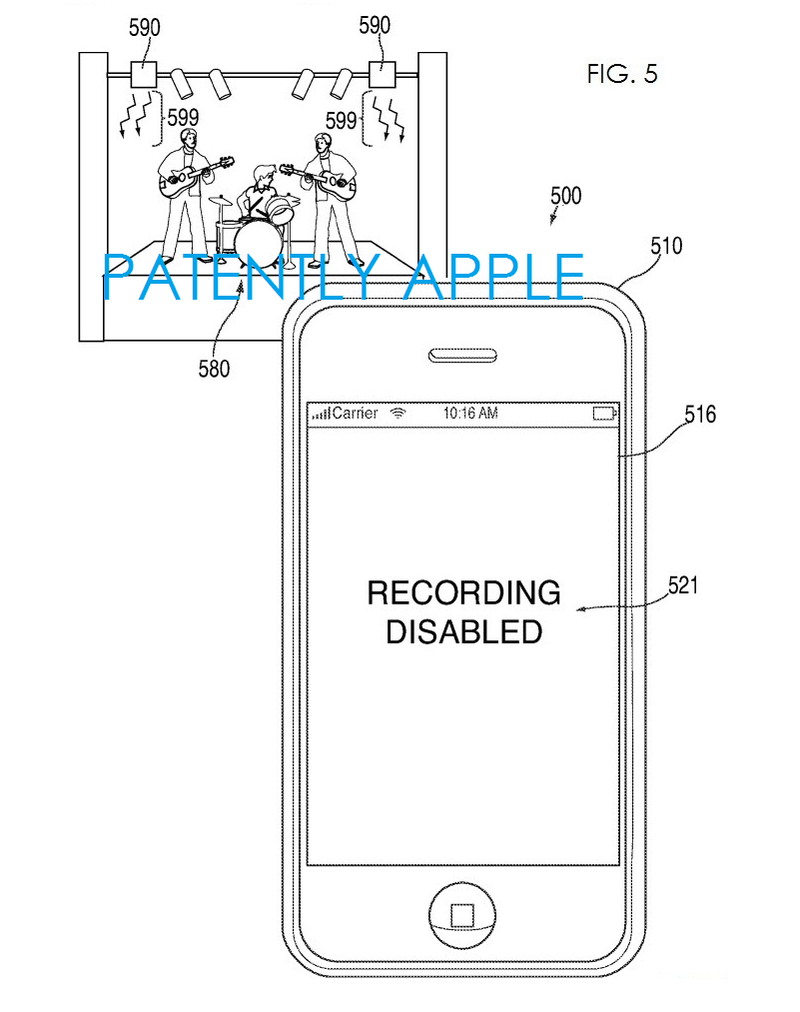 This aspect of Apple's invention was quite controversial when this patent application first came to light back in the summer of 2011.

Apple credits Victor Tiscareno, Kevin Johnson and Cindy Lawrence as the inventors of granted patent 8,848,059 which was originally filed in Q4 2009 and published today by the US Patent and Trademark Office.

Apple was granted a single design patent today for an iPhone back cover likely associated with the iPhone 4. The design date and the fact that it's a flat design would suggest the design relates to an iPhone 4 in the rough. However, without a flash unit it may suggest an iPhone 3 – though that unit wasn't flat. Unfortunately Apple doesn't clarify which iPhone model this design truly represents. 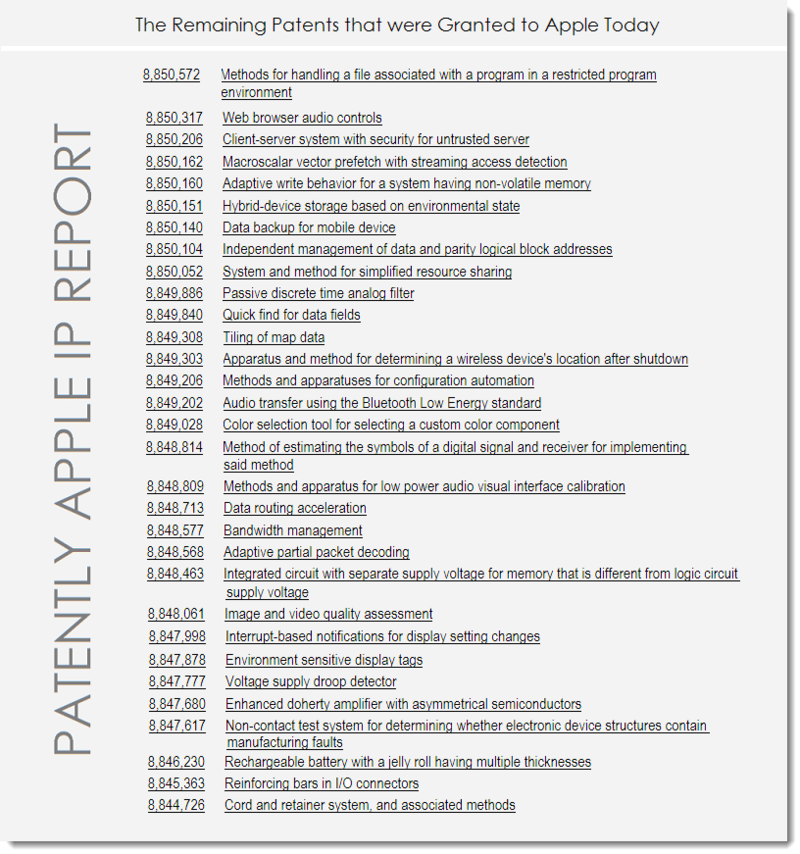