It was relatively quiet at the US Patent & Trademark Office regarding new innovations from Apple today. We found that Apple tweaked their fused glass and running shoe sensor patents that were first covered back in 2013. The tweaks made to both of these patent pending inventions are restricted to legal patent claims and don't represent anything new technologically speaking. If you happen to be following Apple's ongoing work with their Macroscalar architecture relating to parallelism you could review these three new filings today: one, two and three. Apple's Macroscalar first came to light in a 2009 granted patent report. In 2012 we posted a report about Apple filing a trademark for the word "Macroscalar." The technology was probably applied to Apple's 64 bit A7 processor which was introduced last year for the iPhone 5S. Indirectly, there was one patent of interest today talking about next-gen biometrics for future Ford vehicles that will work with iOS.

In our search for new Apple patent applications this morning we came across a new invention from Ford's Global Technologies division that relates to bringing advanced biometrics to future vehicles that will work with Apple's iOS and other mobile systems. 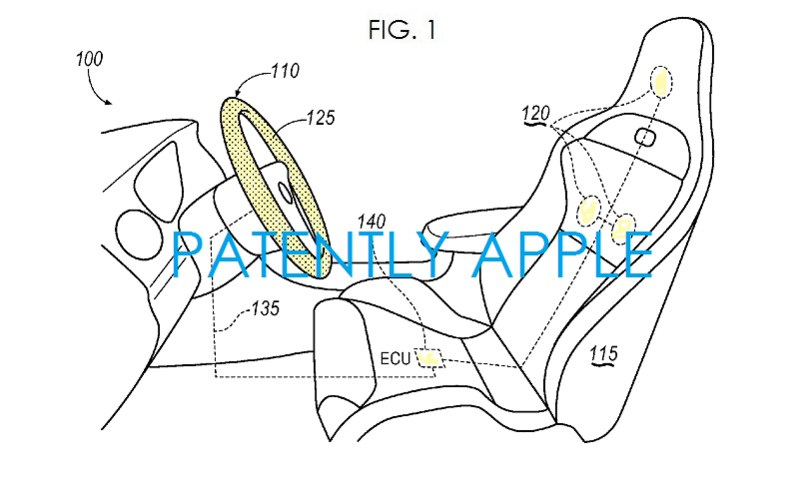 The first point of interest is that biometrics may be applied to a vehicle's steering wheel so as to identify the driver. That would indicate that unless there was a fingerprint match to the owner(s) of the vehicle, it just won't start. Obviously that would work in conjunction with Apple's Touch ID technology, as iOS is one of the operating systems acknowledged in Ford's patent filing.

So as to not be fooled, the system is to work with multiple fingerprints as the driver wraps them around the steering wheel and will measure the drivers pulse to see if there's a match to the owner.

Ford also notes that their biometric system will extend to the driver's seat where there'll be a plurality of new sensors as noted in patent FIG. 1 above. These sensors may be capacitive sensors configured to detect vital signs of the driver. For example, the sensors may be configured to detect electrical impulses from the body of the driver. These electric impulses may be transmitted by the driver's brain and indicative of the pulse or heart rate of the driver. Other vital signs may include respiration rate, various brain waves, body part position or displacement and more.

Ford is listed as one of Apple's CarPlay partners as was last noted in this report. For more on Ford's patent, see patent application 20140285216.

For those wishing to review Apple's patent claim updates for their shoe and/or fused glass patents, can find them under patent numbers 20140288856 and 20140285956 respectively.