Will Apple Address the Growing Trend Towards Hybrid Devices?

In June we reported that Apple's iPhone 5S was the number one smartphone in the world as reported by research firm Counterpoint. That particular report further noted that 3 out of the top smartphones were in the phablet category which marked a 40% increase in just the past year. That's great news as Apple is about to ride that surging wave come September and take those stats to new historical highs. Yet just as Apple is tackling that market segment that they originally missed, IDC is now reporting that the phablet market will begin to drop as 7" tablets with built-in telephony will rule the day in the Asia Pacific (excluding Japan) region.

According to a new IDC report published today, Phablets have already out-shipped notebooks and tablets in Asia over the last year. Yet in spite of that fact, IDC is now discovering the next possible digital device trend that could counter or dampen the phablet rage. According to IDC, mini tablets with 7 to 8" displays are shipping with cellular voice capabilities.

More specifically, these hybrid devices are gaining more traction in the Asia/Pacific excluding Japan region (known as APeJ), breaching the 25% mark in the second quarter of 2014 with about 13.8 million units sold. That translates to more than 60% growth on a year-on-year basis in unit terms for this category of tablets, which also incidentally happen to be 100% Android-based. 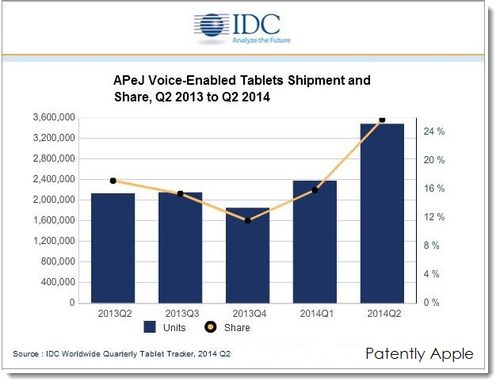 According to IDC'S Avinash K. Sundaram, Senior Market Analyst of Client Devices team Asia/Pacific, "This relatively new segment has seen a surge in terms of both shipments and vendors since the beginning of this year, with shipments reaching close to 50% by share of overall markets in some emerging countries, India and Indonesia being two great examples."

Sundaram added that "This shift highlights the sustained interest among consumers, at least in emerging markets, to have a single mobile device for all their needs – be it watching movies and soap operas, taking pictures, texting or making calls, even if the device has a huge 7" screen on it.

IDC predicts that this trend shift will continue to gain momentum, as these devices are addressing a real consumer need – a single converged mobile device that is also a great value for money. "For now, it does look like the Asian love for bigger screens is set to continue," Sundaram concludes.

In North America on the other hand, this trend is a little different. Last month we posted a report showing that the trend was about convergence in the form of notebook hybrids that combines a notebook when you need it for work and a tablet when you want it for reading and playing games. Intel calls these devices 2-in-1 computers. The trend was confirmed by Best Buy's CEO. Best Buys is the leading retailer for consumer electronics who would be able to note this kind of shift taking place.

While Apple missed the first wave of phablets to market, they'll be roaring into this market come September. The question now becomes, how will Apple react to these hybrid device trends? In Asia, IDC has proven that hybrid tablet-phones are gaining traction and in the US, notebook hybrids are beginning to challenge the standalone tablet market.

At the end of the day, there are now two new credible hybrid challenges coming Apple's way that they may have to address in the year ahead. Apple has many options at their disposal as we outlined in last month's report to counter such trends. Yet CEO Tim Cook is on record as downplaying the relevance of hybrid devices. Though let's be honest; Apple over time changed their minds on a smaller iPad and they're about to enter the Phablet market that most thought Apple would never do.

Yet with Apple's Eddy Cue saying that Apple's best product pipeline in 25 years is coming our way in the coming months, perhaps it'll be Apple's turn to set new industry trends as they did with the original iPhone and iPad. Trends that really mattered.

Whether that will be enough to silence the emerging hybrid device trend is unknown at this time, but something tells me that Apple will have a hybrid of sorts on the market by next year if this trend persists. Yet as always, only time will tell.