According to a new IDC report, the worldwide smartphone market reached a new milestone in the second quarter of 2014, moving past the 300 million unit mark for the first time in its history. Vendors shipped a total of 301.3 million smartphones worldwide in 2Q14, up 25.3% from the 240.5 million units shipped in the second quarter of 2013. The report shows that Apple's iOS dominates the smartphone market at the high-end by a wide margin. Yet despite the many blogs that are playing up the headline that Android and iOS make up 96% of the smartphone market by volume, the reality is that Apple's share of that volume was less than 12%. In other words, on the basis of volume alone, Apple's iOS was crushed by Android.

Ramon Llamas, Research Manager with IDC's Mobile Phone team stated that "With many of its OEM partners focusing on the sub-$200 segments, Android has been reaping huge gains within emerging markets. During the second quarter, 58.6% of all Android smartphone shipments worldwide cost less than $200 off contract, making them very attractive compared to other devices. With the recent introduction of Android One, in which Google offers reference designs below $100 to Android OEMs, the proportion of sub-$200 volumes will climb even higher."

Of course this isn't a market that Apple ever plans to participate in and so the market share numbers on the chart become meaningless as they're skewed for volume alone. 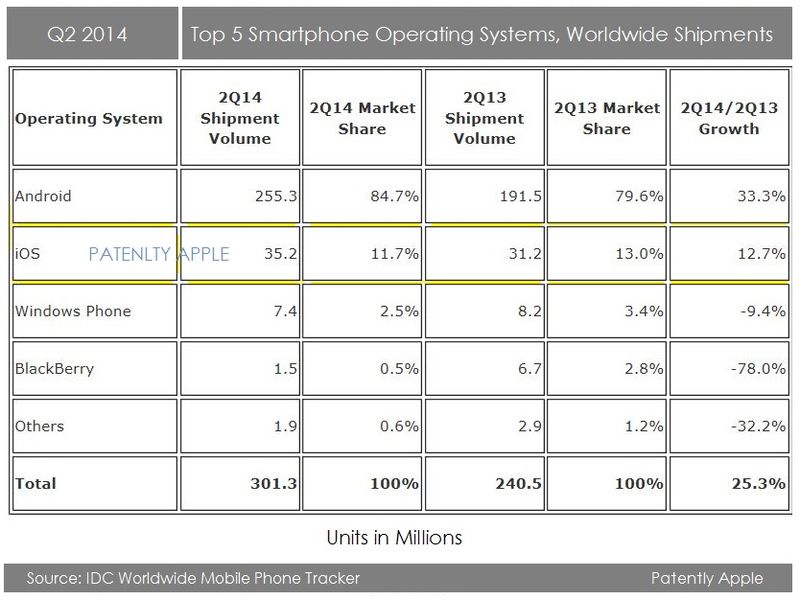 Perhaps the fairer way to look at smartphone sales is from a dollar value and here IDC's second chart tells the right story. Here we can clearly see that Apple only participates in two of the three tiers of the market and that they clearly dominate the higher end of the market where the profits are. I mean, really, who cares about a $25 phone that's anything but smart and earns the OEM $5 per unit? Why the "market" applauds this silly game of volume is beyond me. 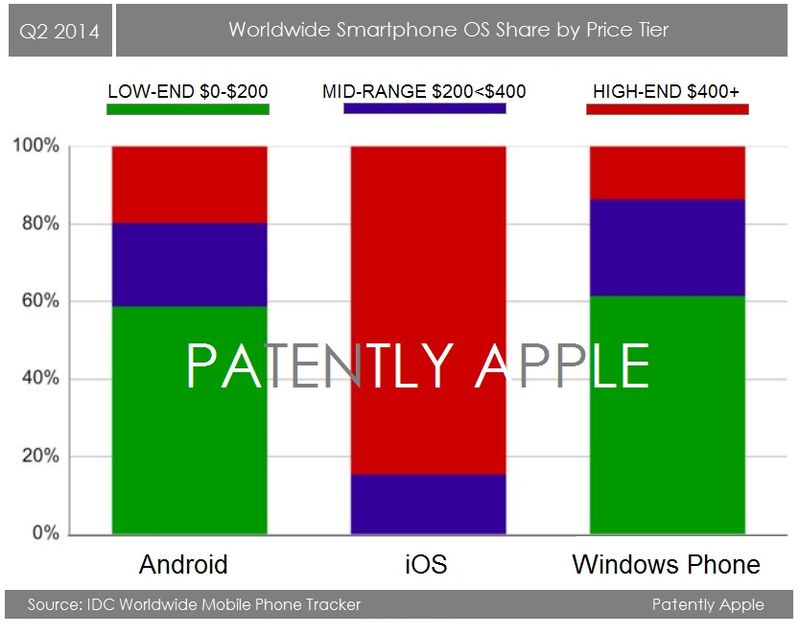 IDC notes that Apple's iOS may have reached its lowest quarterly volume for the year, if history is any indication. For the past two years, third quarter volumes received a boost from shipments of its new devices towards the end of the quarter, resulting in slightly higher volumes compared to the second quarter. Whether or not this happens again this year remains to be seen, especially with the anticipated arrival of large-screen iPhones.

Android on the other hand reached a new record for market share during 2Q14, nearly doubling its share from just three years ago – as cheap phones dominated sales. Samsung once again led the charge, accounting for 29.3% of all Android-powered shipments, down from its 40.0% share of two years ago.

Yet despite the market share gains for Android at the rock bottom of the market, in May, Apple's iPhone 5S Crushed Samsung's S5 Globally and Took Third Spot in China.

The numbers for Windows Phone could improve over the next few quarters if you care about "volume" numbers. Nokia/Microsoft just released a new $25 dollar phone in Europe and Africa. It's not much of a smartphone, but IDC doesn't seem to care about details. It's just about blind volume for the sake of volume. When will they ever learn.