EICES Research has filed a patent infringement lawsuit against Apple. The patent infringement lawsuit concerns Apple's use of 4G LTE in their iDevice lineup. It's a little hard to understand the case. For instance, the Via Licensing's LTE patent pool brings together the essential LTE patents of multiple innovators into a single offering. The LTE Patent License Agreement provides access to all of the patents from the participating licensors which are essential to the implementation of the 3GPP LTE standard. Why EICES Research believes that their technology is above the standard license isn't explained in the complaint before the court.

The inventions disclosed and claimed in the Asserted Patents were invented and patented by Dr. Peter D. Karabinis who holds a Ph.D. in electrical engineering and has worked in the field of wireless communications for thirty-five years for some of the largest companies in telecommunications, including Bell Telephone Laboratories, Raytheon Company, and Ericsson Inc.

Dr. Karabinis' innovative work in the wireless communications field has resulted in over 155 patents to date, including the Asserted Patents.

Dr. Karabinis formed EICES (Engineering Innovators Consultants Educators and Scientists) to develop innovations for the improvement of wireless communications. Dr. Karabinis is the Founder and Chief Technology Officer of EICES. Dr. Karabinis and his family have resided in Cary, North Carolina for over twenty years.

EICES has been damaged as a result of Apple's infringing conduct. Apple is therefore liable to EICES in an amount that adequately compensates EICES for Apple's infringement, which, by law, cannot be less than a reasonable royalty, together with interest and costs as fixed by this Court. 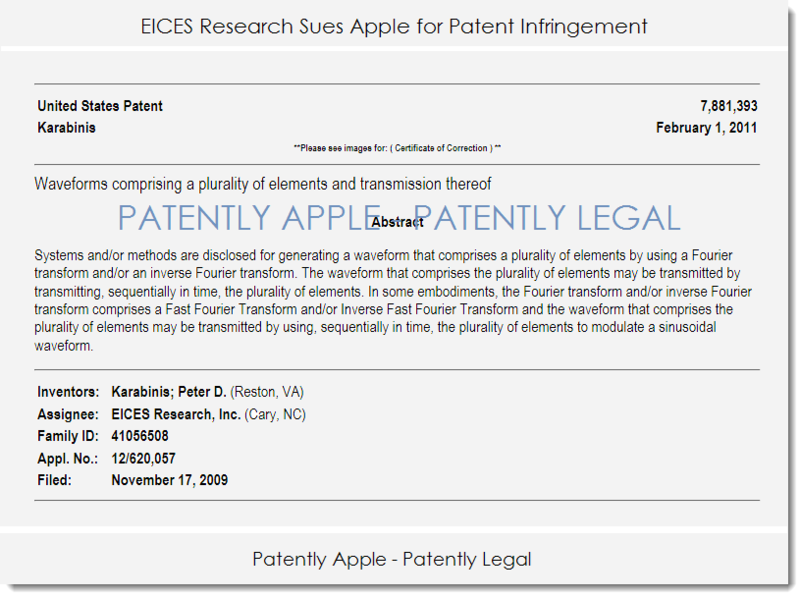 The patent infringement case presented in today's report was filed in the North Carolina Eastern District Court, Western Division Office in Wake County. The Presiding Judge in this case is noted as being Judge Louise Wood Flanagan.