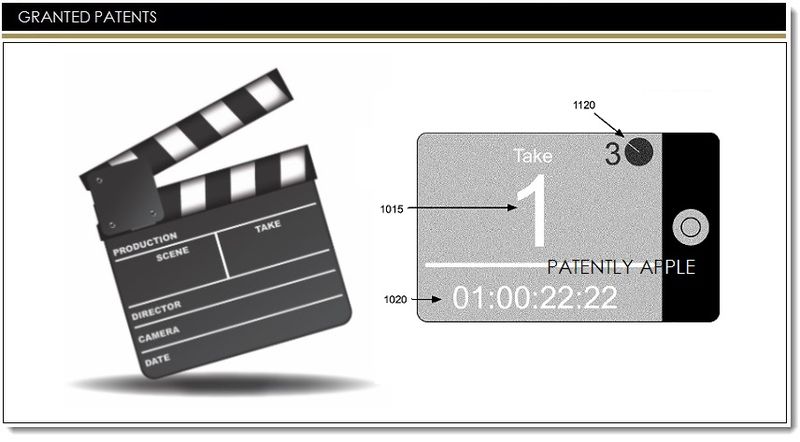 On August 26, 2014, The US Patent and Trademark Office officially published a series of 57 newly granted patents for Apple Inc. today. In this particular report we cover a granted patent that covers Apple's work on an e-clapperboard for the TV and Film industry. Jeff Roenning, a 13 year veteran engineer at Apple was once an assistant editor at Motion Picture Editors Guild. This granted patent was obviously inspired by his experience in that field. Although originally designed to work with an iPhone, the iPad is a much better fit for this type of work.

n film and video production, a slate is used to visually track information about each "take" of a film project. A take is a single attempt at filming a particular scene of the project. FIG. 1 (noted further below) illustrates a typical slate that is used in the film and television industry. The slate includes a dry erase board and a "clapper" (#110). The dry erase board portion of the slate includes fields for a project title (in FIG. 1, the project title is "Hot Baby"), roll (camera roll), scene number, take number, director, cameraman, and date of filming. The slate 100 also includes options "MOS" (filmed without sound) and "DAY" or "NITE" referring to when the take is being filmed.

When filming numerous takes, as is typically done on a set, a slate must be written on with a dry erase marker, then erased and rewritten for each new take. At the start of a take, someone (usually the script supervisor) holds the slate in front of the camera filming the take so that the pertinent information is recorded. The script supervisor then closes the clapper in order to "mark" the take. This clear clapping sound allows sound recorded separately to be synchronized with the video in post-production.

In addition to filling out the slate, the script supervisor also fills out a paper log including all of the information on the slate, as well as other information such as director's comments and what type of shot is being filmed with the present take (e.g., a wide shot, a close-up, etc.). A second log sheet is filled out by the camera department (e.g., by the assistant cameraperson) with the scene and take number, the camera roll, and camera details such as the lens used for the take and any issues with the take (e.g., the camera was out of focus). The sound recordist must fill out a third log sheet with the scene and take number, the sound roll, the microphone used for the take, and any sound details (e.g., if a plane flew overhead during the take).

The three log sheets noted earlier are collected for each take and must be hand-entered into either a spreadsheet that is fed into a non-linear video editor ("NLE") or hand-entered into the NLE itself. Often there will be discrepancies between the three log sheets due to an error by one or more of the script supervisor, assistant cameraperson, and sound recordist, which must be resolved. Furthermore, the data entered into the NLE must be manually matched with the video and sound content it describes. Between rewriting all the data on a separate log sheet for each take, hand-entering the data into the NLE and matching it with the correct content, and resolving errors, the data transfer is an extremely tedious process. Accordingly, there is a need for a slate that is digital and easily portable and that eliminates error and hand entry of data.

Apple has been granted a patent today for their invention relating to a digital slate that is a handheld device and more specifically, a slate that is an electronic version of film industry's clapperboard.

Technically speaking, Apple's invention provides a novel method that uses a handheld device for displaying, capturing, storing, and transmitting metadata pertaining to a video clip. A video clip in some embodiments is a particular take of (i.e., a single attempt at filming) a particular scene in a film (e.g., movie), show (e.g., television show), or other video project. In some embodiments, the handheld device is a handheld multimedia device (e.g., a media player, a phone, a phone/media player, etc.), while in other embodiments, the handheld device is any type of digital device.

Other embodiments of the digital slate receive user input of metadata through a touchscreen. In some embodiments, the digital slate includes a nested hierarchy of menus that is designed to minimize the amount of typing a user has to perform in order to input the metadata, as typing on a handheld device can be a tedious process. The metadata can be received before, during, and/or after the filming of the video clip to which it pertains. Metadata received from user input can include a take number and scene number for the video clip, the director of a project with which the video clip is associated, as well as a variety of other information. In some embodiments, the metadata displayed by the digital slate includes metadata that is input from the user.

In some embodiments, the digital slate includes tilt-detection circuitry such as an accelerometer. Such circuitry enables the device to determine the angle at which it is held. Accordingly, in some embodiments, a user can place the device flat on top of a camera and thereby accurately determine the angle of the camera. Some embodiments store this angle (automatically, or manually through user input) as a piece of metadata associated with the particular video clip filmed by the camera. 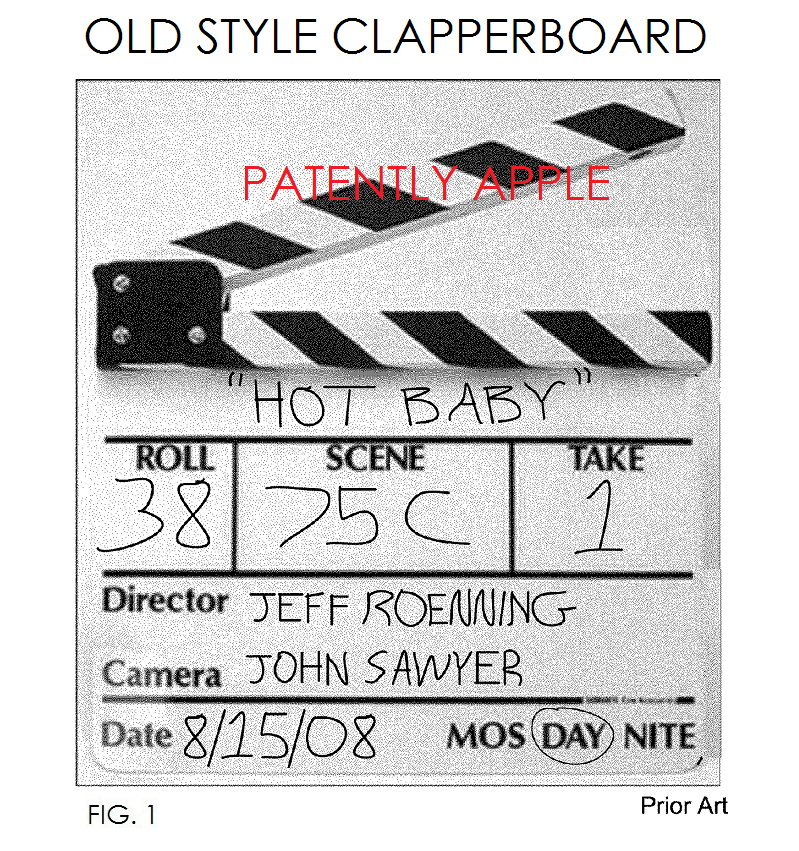 Apple's noted patent figures below illustrate the display of an iPhone (later iPad) used to show a sequence of metadata and a digital synchronization marks for TV and/or the film industry to replace the old wooden clapperboards of yesteryear noted in patent FIG. 1 above. 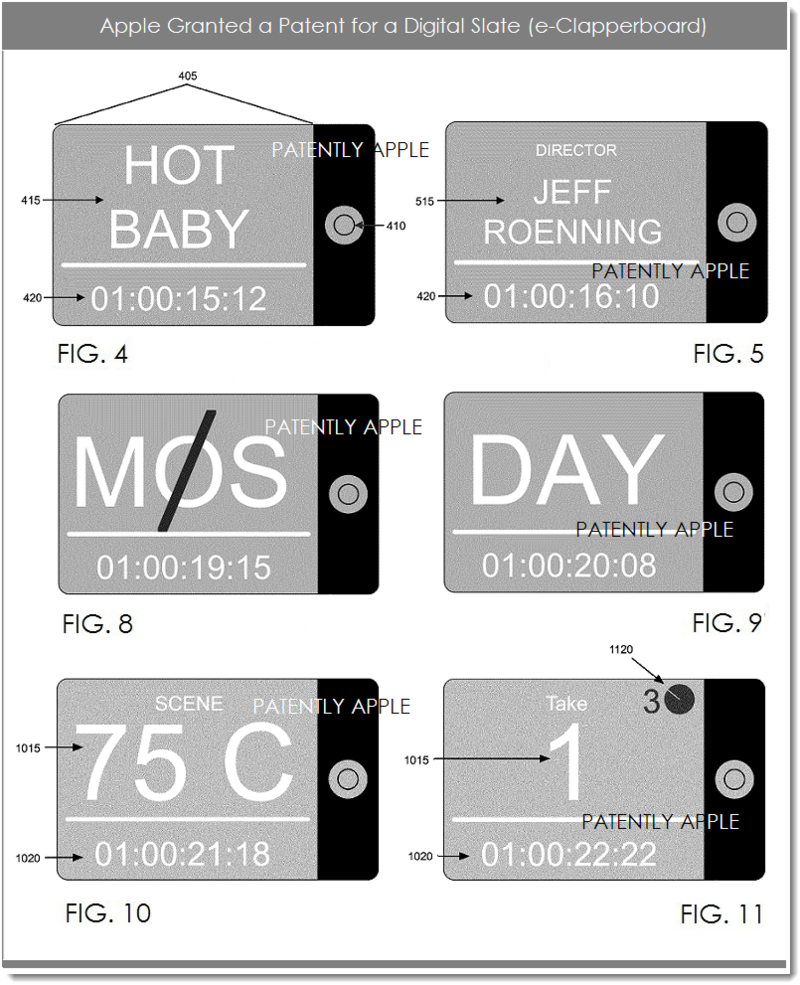 Apple's patent FIGS. 17 and 18 illustrate a first set of menus for some embodiments of a digital slate (e-clapperboard). 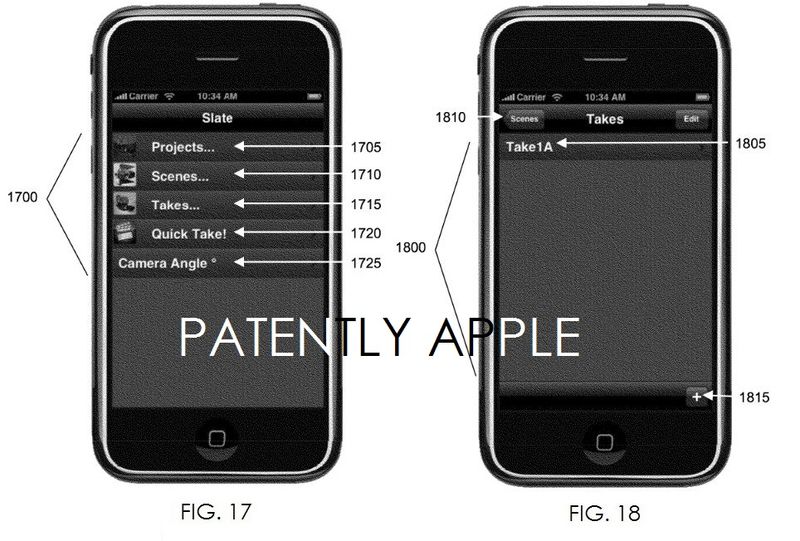 Apple's patent FIG. 2 conceptually illustrates a system of some embodiments that includes a digital slate. 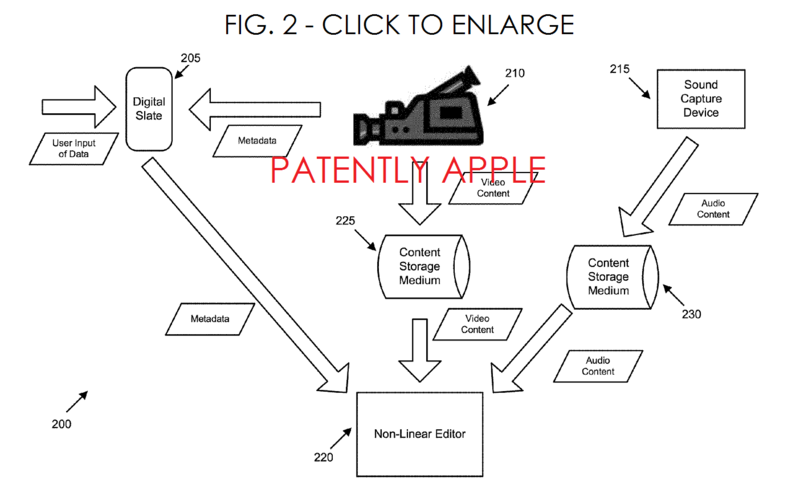 Apple credits Jeff Roenning, a 13 year veteran engineer at Apple who was once an assistant editor at Motion Picture Editors Guild. The patent also credits Doug Devore, Manager of the Final Cut Studio Integration Team, and engineer Patrick Vasta as the inventors of granted patent 8,819,014 which was originally filed in Q3 2008.

Today it's the iPad that's used as both an e-clapperboard and for filming in Bollywood.