Home Archives Contact Us Subscribe Twitter MeWe Facebook Patently Mobile
Taiwan Casing Supplier Posts Surprisingly High Earnings due to Orders placed by Apple for the iPhone 6
In India it's been said that You Flaunt an iPhone, You don't Flaunt an Android

Multiplayer Network Innovations, LLC ("MNI) has filed a patent infringement lawsuit against Apple. The patent infringement lawsuit concerns Apple's line of iPhones, Apple TV Media player, and their line of iPads that allegedly infringe on a patent that MNI acquired that covers multiplayer games, gaming hardware, video and more. Although Apple cites their patent 59 in patents of their own, they refuse to deal with MNI to settle this case. According to the MNI, Apple had knowledge of this patent since 2008.

Multiplayer Network Innovations, LLC ("MNI) holds U.S. Patent No. 5,618,045 (the, "MNI patent" or the, "'045 patent"), a patent invented by Dr. Michael Kagan and Ian Solomon. Dr. Kagan is a noted scholar and inventor. He holds a PhD in chemistry from Hebrew University in Jerusalem and is the author of numerous books and journal articles relating to technology, chemistry, and religion. Dr. Kagan's articles have been published in the journals including Nature and the Journal of Medicinal Chemistry.

Dr. Kagan is the inventor of ten United States patents. Ian Solomon is an inventor and entrepreneur who is the co-founder of medical device makers SteadyMed Therapeutics, Inc. and Aespira Ltd.

During the mid-1990's, Dr. Kagan and Mr. Solomon conceived of a way for electronic devices to communicate with one another for the playing of computer games.

Dr. Kagan and Mr. Solomon's idea was conceived in part against the backdrop of the conflict in the Middle East. The idea was to use wirelessly connected gaming devices to open up channels of communication between people with divergent views.

Among Dr. Kagan and Mr. Solomon's inventions are inventions relating to the use of a device to enable two or more people to play a game over a wireless network. 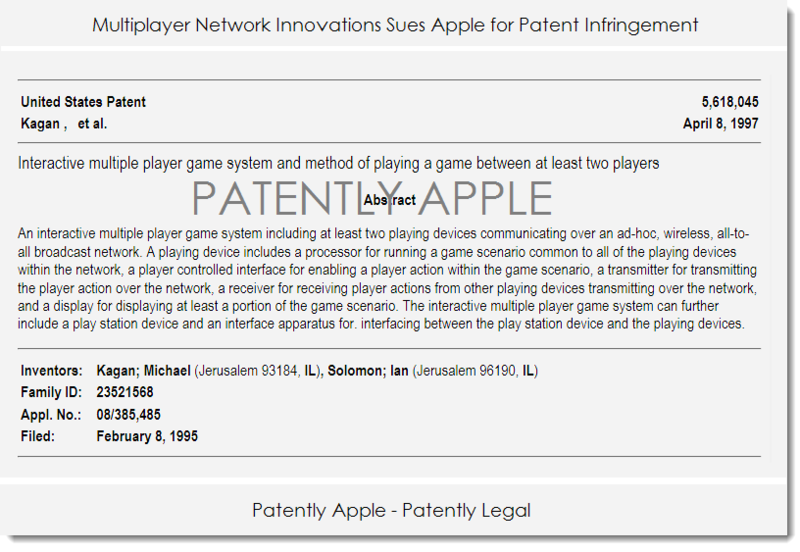 According to the formal complaint before the court, Plaintiff Multiplayer Network Innovations, LLC ("MNI") alleges that Apple has infringed and continue to infringe the MNI patent 5,618,045 by, among other things, making, using, offering for sale, and/or selling multiple player game systems and/or services covered by one or more claims of the MNI patent.

Upon information and belief, Apple had knowledge of the '045 patent since at least as early as 2008.