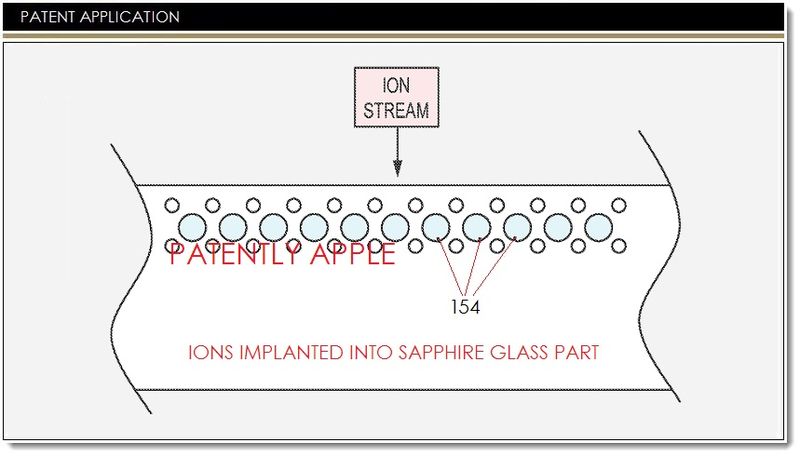 Yesterday an Apple patent filing published in Europe revealed a new multi-step process that will strengthen sapphire for future Apple devices and parts like the cover glass found in the iPhone's Home Button that protects the fingerprint scanner from scratches that could affect fingerprint verification. While our report only skims the surface of this highly technical patent application, it definitely goes to show you the lengths that team Apple will go to explore, invent a deliver cool products for the high-end of the market who appreciate original craftsmanship.

Corundum is a crystalline form of aluminum oxide and is found in various different colors, all of which are generally commonly referred to as sapphire except for red corundum which is commonly known as ruby and pinkish-orange corundum which is known as padparadscha. Transparent forms of corundum are considered precious stones or gems.

Generally, corundum is extraordinarily hard with pure corundum defined to have a hardness of 9.0 on the Mohs scale, and, as such, is capable of scratching nearly all other minerals.

As may be appreciated, due to certain characteristics of corundum, including its hardness and transparent characteristics, among others, it may be useful in a variety of different applications.

However, the same characteristics that are beneficial for particular applications commonly increase both the cost and difficulty in processing and preparing the sapphire for those applications. As such, beyond costs associated with it being a precious stone, the costs of preparing the corundum for particular uses is often prohibitive. It's the sapphire's hardness that makes cutting and polishing the material both difficult and time consuming when conventional processing techniques are implemented. In particular, conventional processing tools such as cutters experience relatively rapid wear when used on corundum.

Apple's invention generally relates to systems and methods for strengthening a sapphire part and a method for orienting a first surface of a sapphire member relative to an ion implantation device and performing a first implantation step.

While sapphire's inherent strength is higher than that of glass, there is not a well-established process like chemical strengthening to provide significant strength improvements after mechanical shaping. Failures in sapphire are typically driven by propagations of surface flaws under stress. Therefore, to improve the strength and robustness of sapphire, it may be useful to apply an ion implantation process to provide a strength enhancement.

The chemical strengthening process for glass, where diffusion substitutionally replaces smaller ions with larger ions, creates a compressive stress layer around the surface of the glass part that serves to prevent the propagation of surface cracks. In contrast, the instant ion implantation of sapphire bombards the sapphire part with high energy ions which are embedded interstitially or otherwise in the subsurface to create a similar thin layer or compressive stress that serves to arrest crack propagation.

The sapphire ion implantation process results in a strained lattice to depths generally less than approximately 1 micrometer. The strengthening is achieved utilizing ions of nitrogen or argon.

Apple's patent FIG. 2B noted below illustrates one of their proposed ion implantation systems for implanting ions into a sapphire part via a plasma ion immersion process. In the particular configuration of FIG. 2B, for example, the implantation system 110 below includes a vacuum chamber type end station (#112) for implanting ions into a selected surface of a sapphire (crystalline aluminum oxide or AIOx) part or component where the selected ions (#131) are generated from an electron/ion plasma 131A. 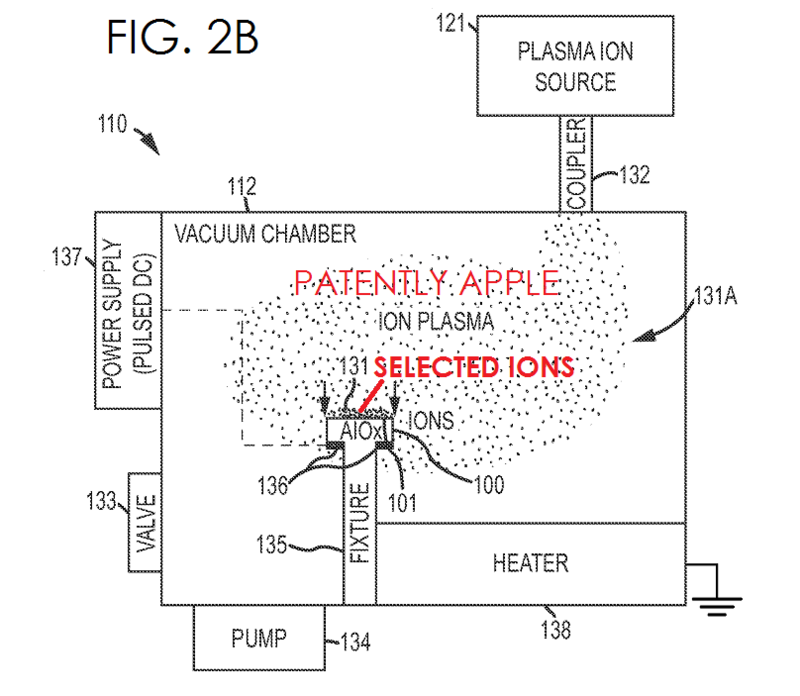 Apple's patent FIG. 7 noted above shows both a top surface 102 and a bottom surface 103 of the sapphire part having compressive layers 160 created through their ion implantation. As shown, the ions may be more concentrated at or near a flat portion of the edge 180, as it may receive the ion stream most directly. The slanted portions of the edge may have a lower concentration of ions.

Apple didn't reveal what sapphire part that we're actually looking at. Is it for the iPhone's camera or is it a part of a future iPhone body? Below is a blow-up of a chamfered edge that's found on the iPhone 5S.

The various techniques described in Apple's patent filing have numerous different applications. Apple notes specifically that sapphire could be used in consumer electronic devices, device cover glasses, camera covered windows and other structures within the devices – such as for the Home Button that's part of the cover for Apple's Touch ID fingerprint scanner.

We reported back in March that Apple's CEO Tim Cook has said that the Arizona facility was for a "secret project" that he couldn't talk about – beyond being used as cover glass. Unfortunately that secret will remain such until Apple surprises us. Today's patent sticks with basic products that we've come to expect for sapphire with the one exception being for "consumer electronic devices," which generically leaves the door wide open.

Apple's patent application was published in Europe yesterday in Europe and originally filed with USPTO in February 2013. No priority patent filing in the US was cited.