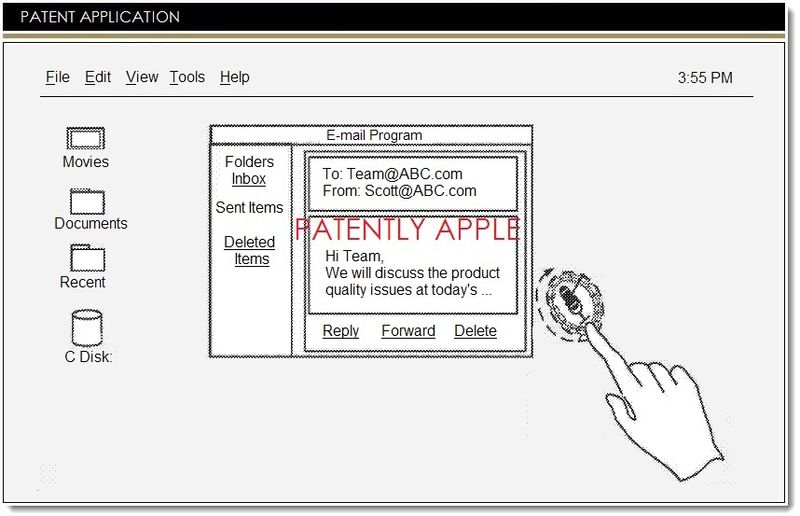 On Thursday we posted two reports about Siri for the desktop. The first report was titled "Apple Reveals 'Hey, Siri' Feature Relating to Future Apps for Restaurant Reservations, In-Vehicle Functionality and more." The second report was titled "Apple Files Major Siri Patent for Mac Desktop Functionality," showed us that Siri will be coming to the Mac to assist users with email, document searches and editing, opening folders, sending documents to the printer and much more. Although the report covered the overall invention very well, it failed to emphasize what Apple considered as one of the main points of their invention, which was the creation of a new gesture that will invoke Siri on the desktop. Today's follow-up report covers several finer points of Apple's patent application about Siri on the Desktop that you might find interesting.

The key to Apple's patent that was covered in our initial report about Siri in a desktop environment, but it wasn't emphasized enough considering that it's a part of the heart of this patent. It's the method of invoking Siri.

Apple's very first patent claim, which covers the most important claim, states the following: "Detecting an input gesture from a user according to a predetermined motion pattern on a touch-sensitive surface of the user device; and in response to detecting the input gesture, activating a digital assistant (Siri) on the user device.

As you can see in our cover graphic, a user will be able to call up Siri by simply drawing a circular gesture on the touchscreen of a future Mac. User's may also be able to use an Apple Magic Trackpad to perform this task as noted further below.

More specifically, Apple tells us that the user must make two full circles to call up Siri. Why twice? – because if the user changes their mind during the drawing of the first circle, then the user is able easily abandon the call for Siri by simply lifting their finger. 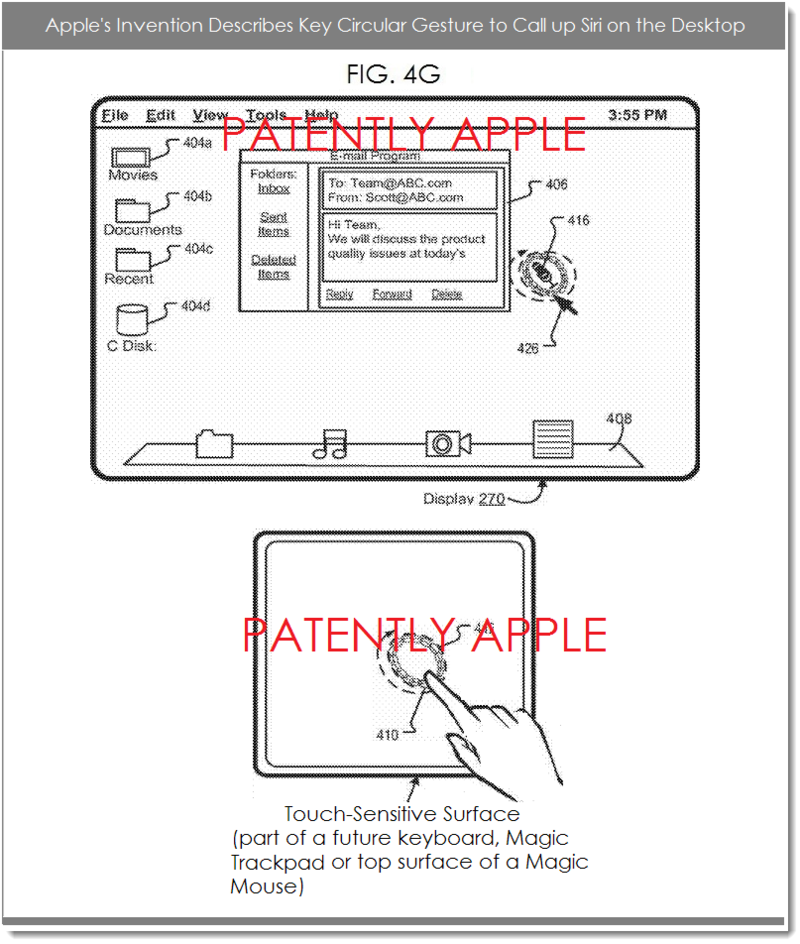 According to Apple, when the user begins to draw the circle gesture, the user will gradually see an animation showing the formation of the Siri icon on the display.

More importantly is where the user decides to draw the gesture. If the gesture is drawn near an email app or editing app, Siri will understand the context of your upcoming requests.

Yet make no mistake about it, Apple makes several references to the desktop user interface being interacted with just a finger or stylus on the desktop UI. In our cover graphic, it's abundantly clear that the user is simply contacting the desktop UI on a touch display directly. This is something that Apple first revealed and discussed back in a 2010 patent application that we covered here. 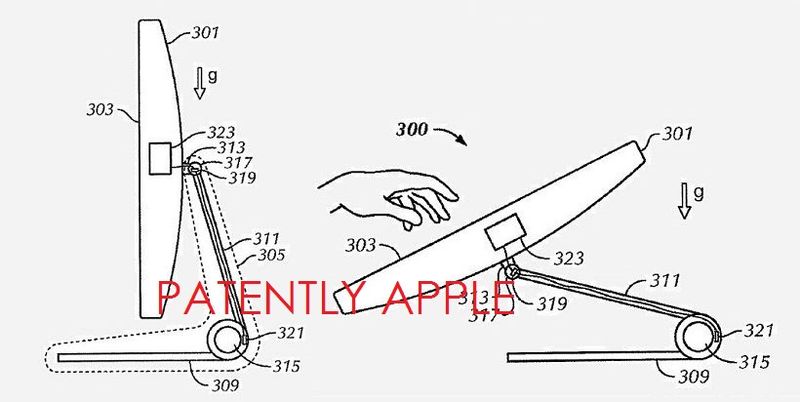 Apple's current patent point #138 further stated that "an exemplary graphical user interface (e.g. a desktop interface) is provided on a touch-sensitive display…" Apple further describes "the user manipulates the user interface objects, optionally, by providing various touch-based inputs (e.g., a tap gesture, swipe gesture, and various other single or multitouch gestures) on a touch sensitive display screen," which is associated with a Mac.

Another interesting point that was discovered in Apple's patent filing is how they envision power multitasking, by calling it an "Atomic" Task. 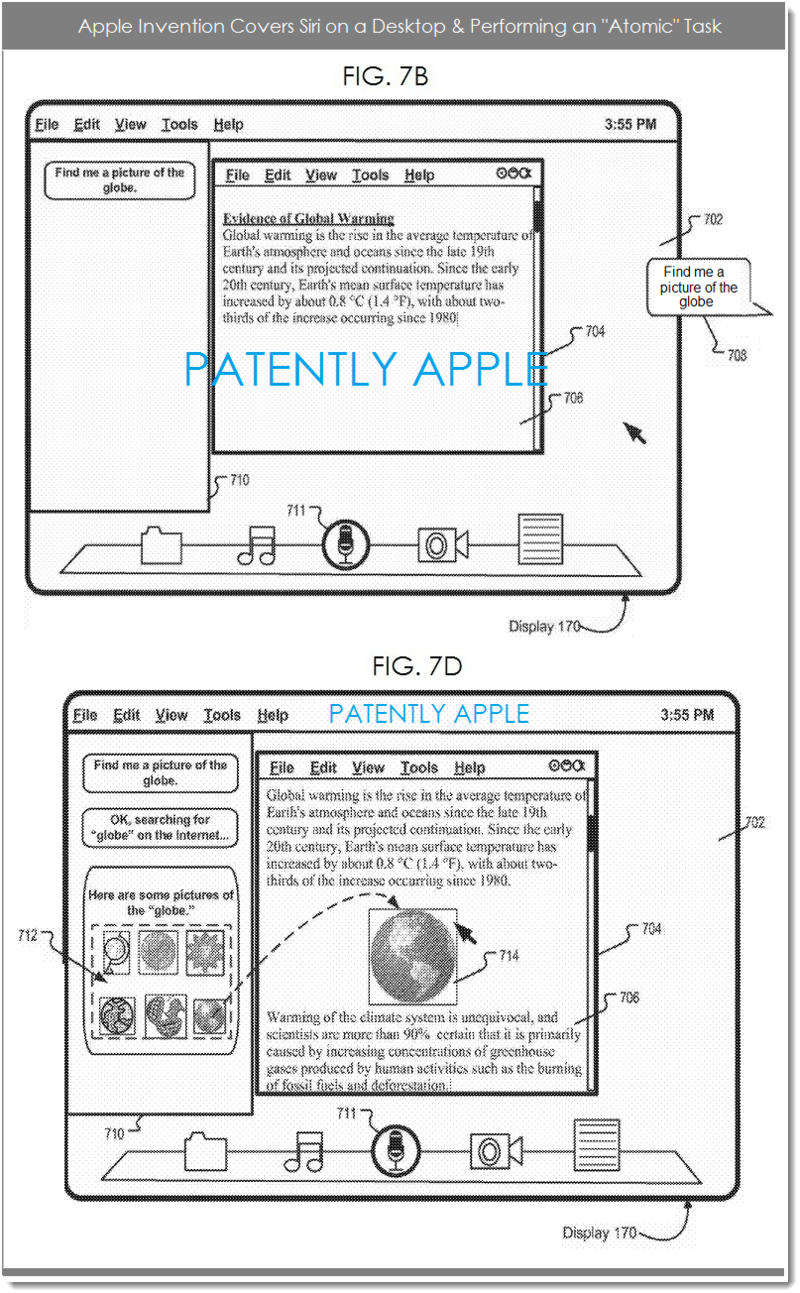 More specifically, Apple notes that in FIG. 7B, while the user continues with the editing of the document in the document editor window, the user provides a speech input (e.g. "Find me a picture of the globe on the Internet.') to the digital assistant. In response to receiving the speech input, the digital assistant determines a requested task from the request as noted above.

At that point, Siri will use the title of the document or the text within the document to determine that the user is interesting in finding a picture of a terrestrial globe, rather than a sphere or celestial globe. Then Siri will display thumbnails of globe graphic options to the user as noted in patent figure 7D. The user could request more examples or request Siri to enlarge or shrink a particular image as requested to fit the document.

Apple's concept of an Atomic task could theoretically be a huge boost to productivity. As one who works on patent report, it would be really great to get Siri to do some of my searches for me and present the findings conveniently in the window of my work. Yet time will tell how that will actually play out, because that's easier said than done. It could equally be a huge time distractor if Siri keeps pulling up the wrong results. It's definitely going to be a little rocky in the beginning, but the long term benefits could be fantastic.

The patent, as we illustrated in Thursday's report, will extend to document sorting, opening folders and other office related tasks. It would be interesting to know if IBM could collaborate on developing Siri for the enterprise, as they have extensive experience. In 2003 IBM licensed the exclusive marketing of ViaVoice to Nuance Communications, maker of Dragon Naturally Speaking. Nuance is behind Siri to a large degree.

Will Siri Work its way over to Apple TV?

There's one last point about this week's patent about Siri on the desktop that's worth noting. Firstly we point to a 2012 Apple patent hinting at Siri working with iTunes on a desktop UI. In this week's patent, Apple talks about Siri understanding commands related to "Play this movie on the big screen." Apple notes that "in some embodiments, based on the speech input, the server portion of the digital assistant infers that the user has requested a task for "playing a movie," that a parameter for the task is "full screen mode."

Apple also noted that in some embodiments, "the digital assistant remains active and continues to listen in the background for subsequent speech input from the user while the movie is played in full screen mode."

While Apple leaves us hanging there, it would seem to strongly suggest that Siri would remain active for commands such as "Pause" and "Play" at the very least so as to control the movie for users without a remote.

If Apple is mentioning Siri in connection with controlling the playing of movies for the desktop, it's not much of a stretch to think that Apple is likewise working on an iOS version associated with Apple TV considering that it's already available on Microsoft's Xbox One.