Home Archives Contact Us Subscribe Twitter MeWe Facebook Patently Mobile
University Students Get a Deal if they buy a Mac before Sept. 9
IDC's New Smartphone Report illustrates that the iPhone still dominates the Higher-End of the Market by a Wide Margin Apple was granted a patent this week for their In-Cell or "Integrated Touch" display technology. Today, the US Patent and Trademark Office published Apple's patent application for their latest technology regarding "In-Cell for LED" or OLED/AMOLED displays. In a secondary patent filing Apple focuses on fingerprint imaging and quality characterization. One of the patent figures illustrates the iPad integrating Touch ID which is likely to debut this fall.

One of Apple's latest inventions relate to integrating touch circuitry into an LED display pixel stackup of a touch screen device. The touch screen can include a transistor layer, an LED layer and a first layer that can be configured to operate as an LED cathode during a display phase and as touch circuitry during a touch sensing phase.

The transistor layer can be at least partially utilized for transitioning between the display phase and the touch sensing phase. Furthermore, the touch screen can be fabricated in such a way as to reduce or eliminate damage to the LED layer during fabrication.

In Apple's patent FIG. 5 noted below we're able to see a three-dimensional illustration of an exploded view (expanded in the z-direction) of example display pixel stackups 500 showing some of the elements within the pixel stackups of an example integrated touch screen. The stackups can include a configuration of conductive lines that can be used to link drive region segments to form drive lines. 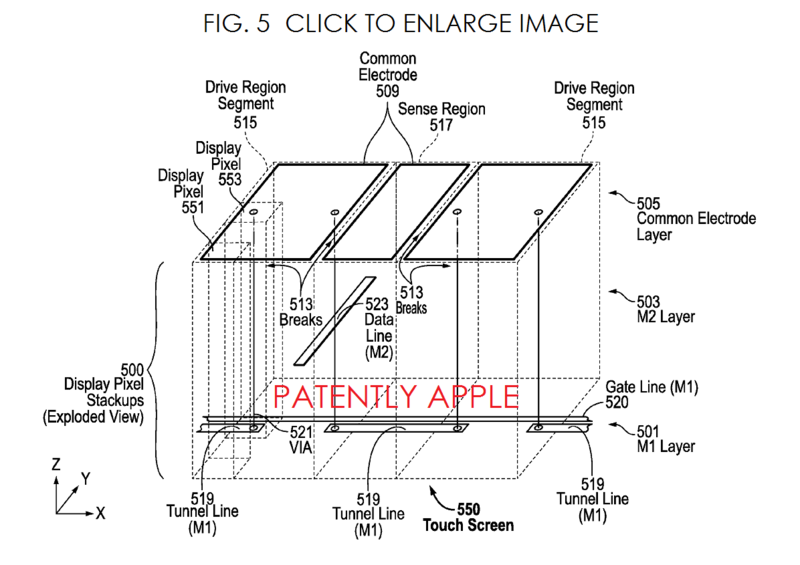 Further into FIG. 5 Apple notes that a touch screen can include a gate line running through each horizontal row of display pixels and multiple data lines running through each vertical row of display pixels, for example, one data line for each red, green, blue (RGB) color sub-pixel in each pixel in a vertical row of an RGB AMOLED display integrated touch screen.

Apple's patent FIG. 6 shows partial circuit diagrams of some of the touch sensing circuitry within display pixels in a drive region segment and a sense region of an example touch screen. 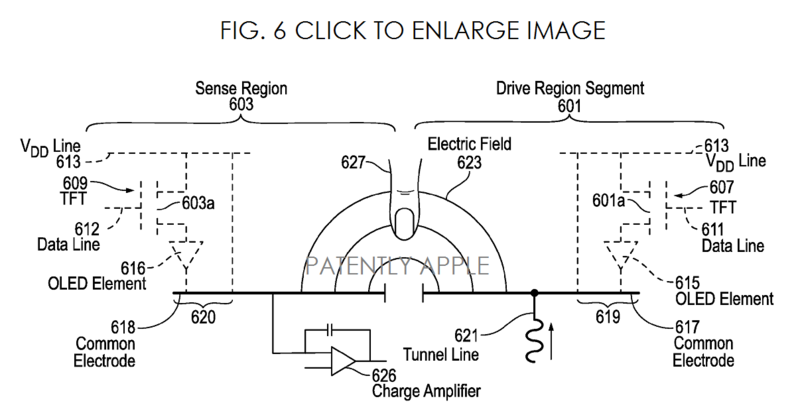 As could be imagined, this is a highly technical patent that could only be truly appreciated by those in this field. For those wishing to explore this patent filing and the great well of patent figures, see Apple's patent application 20140225838 here. Apple credits Vasudha Gupta, Shih Chang, Young-Base Park and Ting-Kuo Chang as the inventors.

Usually OLED display patents are for flexible displays and for wearable computers, but this patent application put emphasis on future smartphone/iPhone applications as well as displays for Macs. Last week we covered an Apple patent discussing touch screen Macs. Apple also notes that the Fingerprint sensor 12C may also be provided as an external accessory, for example coupled via a USB port or other connector aperture 46, or using a wireless connection for user authentication for the iPad.

It's widely expected that Touch ID will be coming to the next upgrade of the iPad this fall.

Noted below is Apple's patent FIG. 1 which is a block diagram of an exemplary fingerprint image processing system.