Earlier today we posted a report titled "Apple Advances Automatic Vehicle Location Services for Parking." It was one of three new location based patent filings revealed today by the US Patent Office. In a third filing today titled "Sensor-Assisted Location Fix," Apple describes location scenarios beyond parking and discusses location-centric problems and solutions associated with driving in urban canyons, which is a powerful image when you think of cities like New York, Hong Kong, Osaka, Beijing, Toronto, Vancouver, Chicago and others that have massive buildings in their downtown business cores.

Sensors, such as accelerometers, compasses, gyrometers, and the like, can be used to supplement and/or increase the accuracy of location data. For example, a location-enabled device can identify an area with unreliable GPS location data and use sensors to calculate a more accurate location.

Driving or Walking in Urban Canyons

In one of Apple's more interesting scenarios for sensor-assisted location technology they discuss the problems with walking or driving in an "Urban Canyon." In respect to driving, Urban Canyons can play havoc with Apple's Maps Turn by Turn Navigation. If you're a tourist, you sure want to know exactly where to turn in New York or any other major city where urban canyons exist. Apple dedicates a section of the patent filing to this problem. 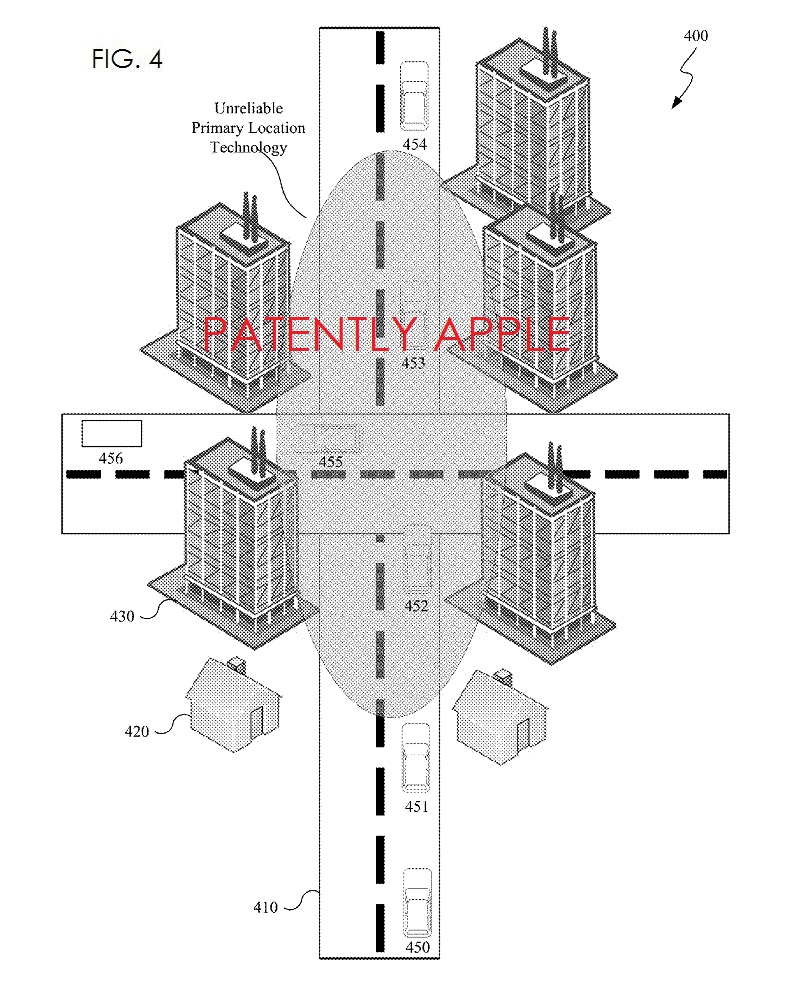 A mobile device such as an iPhone may be inside of the vehicle. Although FIG. 4 illustrates a car moving through an area with unreliable location signals, the same concepts could apply to a person in another type of vehicle or a person walking through an urban canyon or similar problematic area where a primary location technology is unreliable.

Then as the vehicle and/or mobile device moves further into the downtown core the road is met with large high rise which may obstruct one or more location signals. If at position 452, only the primary location technology was used, it is possible that the location data would be inaccurate and may have a high margin of error.

In the urban canyon scenario, a more reliable location can be calculated by switching to estimation mode when a problematic area is identified as noted above.

Apple's sensor-assisted location fix patent filing is very detailed as could be expected with such a detailed problem and there's no magic bullet that could capture the entire solution Apple has devised into one neat paragraph. Those wanting to delve into more of the specifics can review Apple's patent filing here.

Apple credits Devrim Varoglu as the sole inventor of this patent application that was originally filed in Q1 2013. Considering that this is a patent application, the timing of such a product to market is unknown at this time.