Apple and Google Headed for an Indoor Location Services War 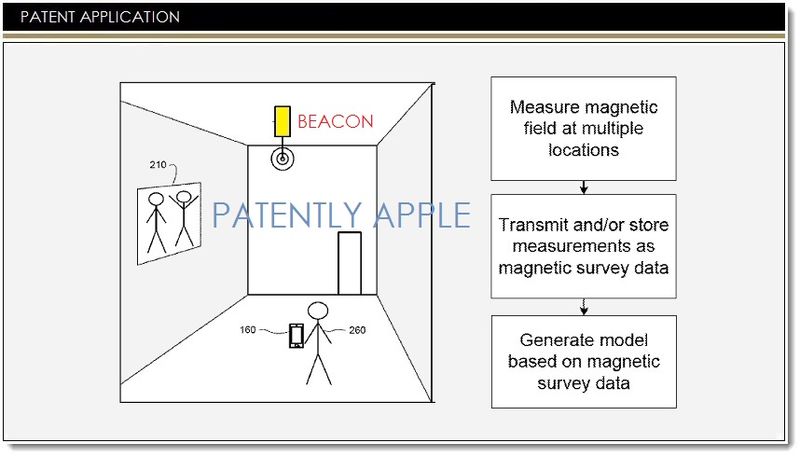 In 2011 we posted a report titled "Apple working on a Sophisticated Infrared System for iOS Cameras." In that report we pointed to Apple's patent application providing a specific example regarding infrared technology's use in a museum scenario The museum would be set up with an infrared transmitter so that when visitors with an iPhone would approach a painting or artifact, a special app on the iPhone would be able to receive information about the piece in the form of a photo, a video, some simple background specifics or an audio track that could act as your personal museum guide. Today's report provides you with 3 museum specific patent figures. One is from Apple and two are from a new patent application from Google. What's interesting about Google's invention is that it replaces infrared with beacon technology. It's obvious that Apple has likewise shifted gears in respect to this new technology. Today's report briefly touches on Google's latest patent application while providing you with a few interesting twists that you might find informative as the war between iOS and Android on indoor location services gets ready to explode.

Apple Patent Figure Regarding Infrared Technology used in a Museum 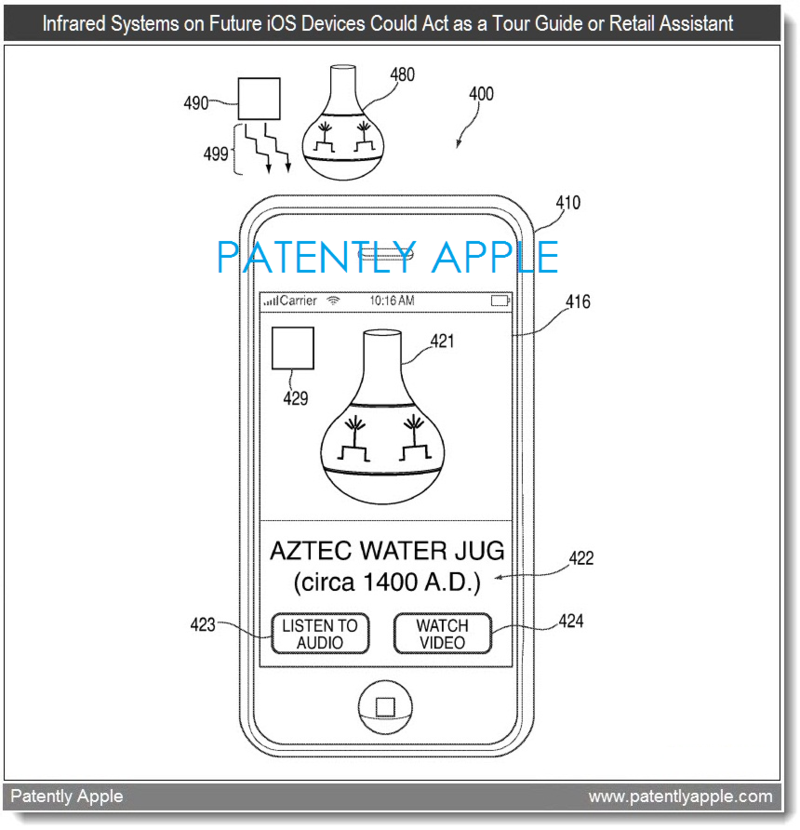 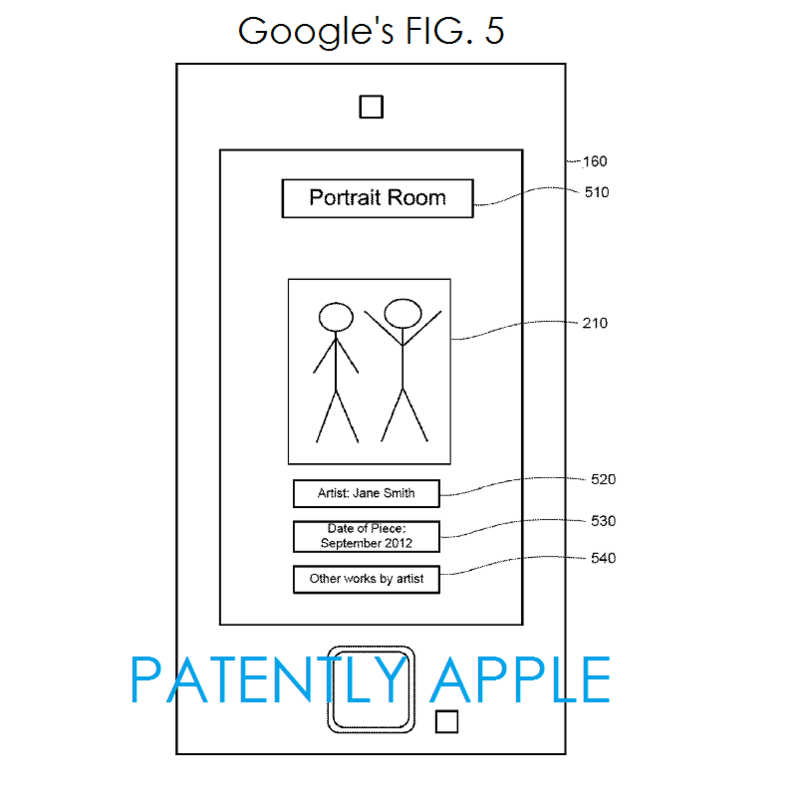 This week the US Patent & Trademark Office published a patent application from Google that revealed an overview of a Beacon centric indoor location system for future indoor location services for Android.

Google provided an example of a future Android user being able to use an indoor location service to find information about a painting as they approached it in a museum. The service will also one day extend to providing Android users with detailed indoor maps for malls, office buildings and beyond. Our cover graphic illustrates a part of a museum scenario that Google lays out and in the patent figure 5 noted above, we're able to see how using indoor location technology and an app on Android users will be able to have information about a picture or painting pushed to their device so that it's like a private tour of the museum.

One of the main technologies employed in Google's beacon technology patent is that of magnet sensor technology. Google's Don Dodge notes that magnetic sensors are able to pick up the Earth's natural magnetic forces to determine latitude/longitude position similar to the way a compass works, but two dimensional, and is much more accurate. More specifically, he noted that high accuracy today is considered to be in the 1 to 5 meters range. Apple's indoor location technology is currently recorded as having real-time accuracy of 2.5 meters.

Don Dodge is an interesting individual who is currently an investor in ByteLight, and an advisor to Aisle411 and Navisens while working at Google as a Developer Advocate. Yet an interesting factoid was learned about Dodge when conducting our research for this report. Don Dodge was an investor in WiFiSlam before it was acquired by Apple in March 2013 according to a disclosure he made in one of his blog entries published a year ago.

Then in an MIT Summit video that was posted in June of this year, Don Dodge briefly mentioned Apple buying out a company that he was involved with which is now known to have been WiFiSlam. In his presentation he specifically stated the following:

"Three years ago I was at Stanford [University] and I saw these Stanford PhD's doing indoor location. They had a map of the Stanford campus and they showed me walking around the campus. I could actually see where I was in real-time moving. I was stunned! It was unbelievable. So, I'm an Angel investor, I invest in a lot of companies, and I invested in that company. And thirteen months later, it was acquired by Apple."

In a secondary video on the subject of location technologies, Don Dodge said this about WiFiSlam at the 13:44 mark: "My first investment [in location technologies] was WiFiSlam. It was acquired by Apple earlier this year – and it was clear to me when I saw WiFiSlam that they had a unique advantage that no else had and the team was from Stanford PhD's and they were just killing it."

In Apple's latest promotional video called "Dreams" they include a tiny segment of Firehouses using an iPhone 5S application and in their iPad-in-Business segment they have a detailed segment on the "Central County Fire Department." I bring this to your attention because it's a market that Apple is involved with today and it's a market that Apple will be bringing indoor location services to in the future as explained in scenario described below by Don Dodge. 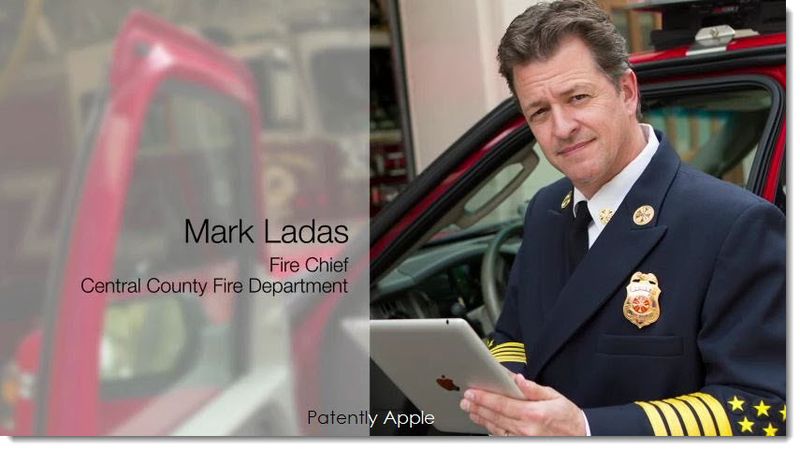 "Imagine Firemen. Firemen get called to a burning building, it's all smoky, they've never been there before, they don't have a map of this building, but they've got to go inside and find someone. How are they going to do that? Well, if they have their cell phone and an indoor map, it will give them a map of that building and it will show them exactly where they are and not only that – it'll show them where the other firefighters are inside the building. And if they need to get out it shows them the exit way out"

So it's very clear that indoor location technology is going to play an important role in smart devices going forward and Apple is going to be at the forefront. Another interesting avenue for this technology is in first person shooter games. According to Dodge, some future video games will be able to use any building you want to be used for your first shooter game instead of being locked into the one location set the gaming developer.

In April of this year we posted a report showing how 87% of iDevices were iBeacon ready while Android was only at a paltry 2.5%. I'm sure that will quickly change in the coming years, but it was just to show that Apple was leading the way in this technology.

Then in May we posted a report titled A Brief Overview of iBeacon Technology that could also be used in Future Home Automation and in July we reported on iBeacon testing documents that are currently with the FCC. So this is going to play a huge role in iDevices going forward, especially because of Apple's new HomeKit and Home app coming to iOS 8.

Apple and Google are competing on street maps while rapidly working on next wave of mapping technologies geared towards Indoor Location services. Dodge thinks that indoor location is the Next Big Thing and as always with Apple, it'll be the Next Insanely Great Thing.

While only time will tell – for now we know that the momentum towards indoor location services is really starting to mount and is likely to explode once Apple's iOS debuts next month. And with Google's own Don Dodge describing Apple's WiFiSlam technology in glowing terms such as "stunning" and "unbelievable" – it looks like Apple may actually have the winning hand as this next technology revolution begins.