A new Barron's report posted today states that five Pacific Crest analysts have issued a 27 page group report wherein they declare that "a partnership between Apple and Visa would make strategic sense and believe an announcement could happen as early as this fall." Whether the group has access to insider information on the matter or is simply reflecting that which has been reported on lately is unknown at this time. However, the group has quite the detailed chart covering their position as noted in our report. 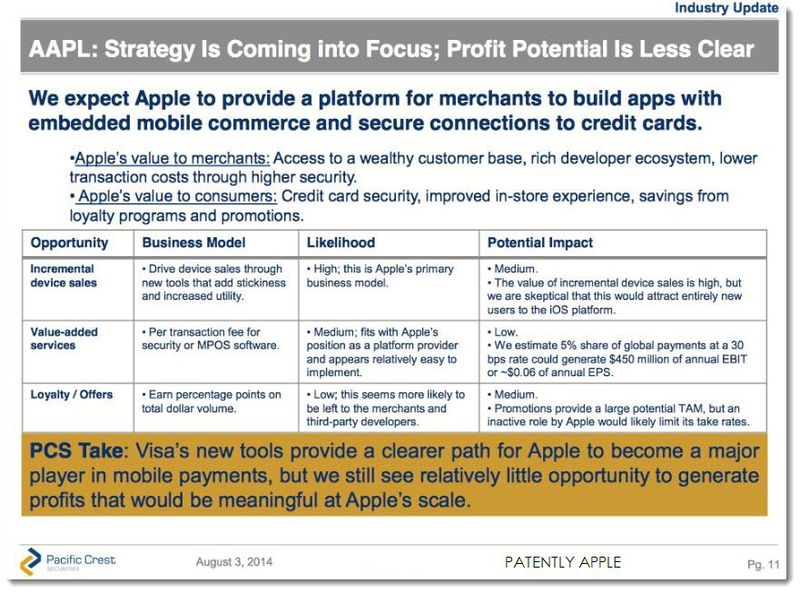 It's noted in the Barron's report that the group "presumes the next model of the iPhone, an 'iPhone 6,' will have contactless payments technology in it."

The Pacific Crest report notes that "For Apple, the Visa "token service" from Visa could help it 'gain scale more rapidly,' which has been a 'key obstacle that has muddled previous mobile payment projects.'

They further note that "A combination of cloud-based and physical seems like a plausible security strategy for Apple."

While the group sees value for Apple, they clearly noted that "Visa's new tools provide a clearer path for Apple to become a major player in mobile payments, but we still don't see relatively little opportunity to generate profits that would be meaningful at Apple's scale."

It's unknown at this time if Apple will in fact offiicially introduce an iWallet application with iOS 8 next month when unveiling the iPhone 6.