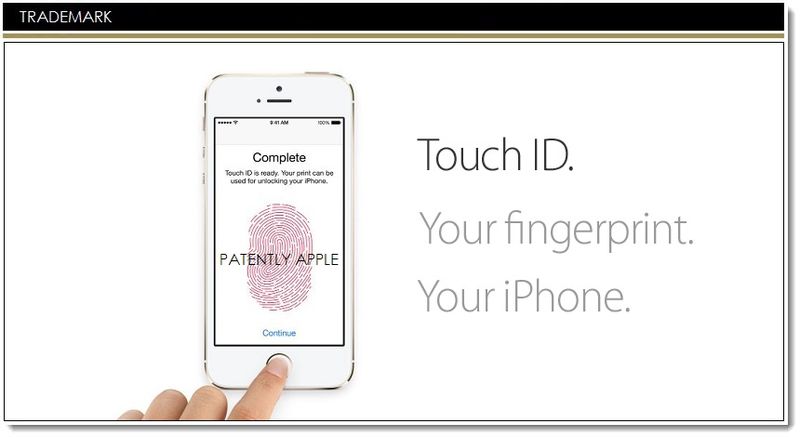 Today, the US Patent & Trademark Office published an official letter that was sent to Apple regarding their trademark application for "Touch ID" having been refused by their trademark examiner. Noteworthy is the fact that the letter was originally sent to Apple on May 7 and only made public today. That's over a two month delay. The case against Apple's Touch ID being registered seems to be solid and valid. Apple officially has six months to reply to USPTO with a work-around remedy or risk automatic trademark abandonment. With Apple likely to add their Touch ID feature to new iPads this fall, it'll be interesting to see how Apple reacts to this latest news.

Refusal based on "Likelihood of Confusion"

The US Patent and Trademark Office (USPTO) has refused to register Apple's "Touch ID" trademark based on there being a likelihood of confusion with the mark in U.S. Registration No. 2735480 as noted below. USPTO states that "Trademark Act Section 2(d) bars registration of an applied-for mark that so resembles a registered mark that it is likely that a potential consumer would be confused or mistaken or deceived as to the source of the goods and/or services of the applicant and registrant.

The overriding concern is not only to prevent buyer confusion as to the source of the goods and/or services, but to protect the registrant from adverse commercial impact due to use of a similar mark by a newcomer.

All in all, USPTO's letter (Office Action Outgoing) to Apple covered the following: 1a. Likelihood of Confusion; 1b. Applicant's mark and Registered Mark are Similar; 1c The Goods are Related; 2a Refusal – Merely Descriptive; and 2b Identification of Goods – Infinite Wording.

An interesting point made by USPTO was in regard to "Infinite Wording." According to USPTO "In the identification of goods, applicant must use the common commercial or generic names for the goods, be as complete and specific as possible, and avoid the use of indefinite words and phrases. If applicant uses indefinite words such as "accessories," "components," "devices," "equipment," "materials," "parts," "systems" or "products," such words must be followed by "namely," followed by a list of the specific goods identified by their common commercial or generic names."

This is a point that we've made on several of Apple's trademark applications. They file some trademarks under International Classes with infinite wording. Everything is thrown at the trademark class with no distinction. Some classes would throw in everything but the kitchen sink and use descriptive terms like electric socks, dog whistles, and electrified fences when dealing with something such as "maps." In most cases the trademark is unique enough that USPTO will register it in spite of the "infinite wording" clause. However, in a case such as this current one, this particular practice of Apple's has to be called into question.

Apple has six months (up to Nov.7) to either fix their fingerprint trademark Touch ID problems as outlined by USPTO – which would likely require renaming this feature – or make Kronos an offer that they simply can't refuse to take ownership of the trademark. Time will tell which direction Apple will take.