The iPad's Web Traffic Stats at 78% crush all Android Tablets

A new web traffic report published today once again shows that Apple's iPad remains the King of web traffic in the US and Canada. It likewise reports that Samsung's user base exhibited the largest share loss over the same timeframe, dropping two full percentage points. This supports our report that indicated that Samsung tablet sales were sluggish for last quarter.

The new report notes that the overall tablet usage environment remains very similar to what was observed earlier in the year. Aggregate Web usage from Apple's iPad users remains substantially higher than that of any other competitor, with Amazon and Samsung representing a second-tier above the remaining manufacturers. 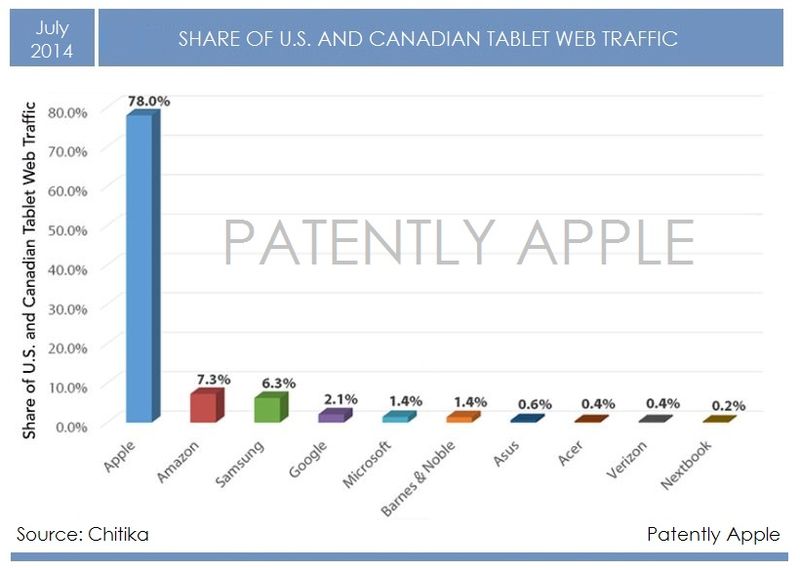 Outside those three largest players, none experienced a share increase or decrease beyond 0.2 percentage points since the previous study. However, looking at year-over-year trends, many of these less popular brands do exhibit usage share increases since 2013 – a positive sign for the long-term health of those device makers in the tablet market.

As the holiday season slowly approaches, it's anticipated that a number of new tablet offerings will begin to make their way to the North American market. While new devices can certainly energize some current and potential customers, the most recent usage share increases were at least partially driven simply by discount-oriented promotions or expanded availability of existing models.

Analysts have pointed to slowing tablet market growth in North America, adding that consumers are feeling less compelled to upgrade the same way they did in years past. Should this hold true, creative pricing and promotional models may make a growing impact on the tablet market moving forward. On July 10 we reported that Apple offered iPad owners up to $240 in a trade-up offer and it's an offer I gladly took advantage of. More offers like this may surface again this year.