It's being reported today that South Korea's tech giant Samsung Electronics Co. saw its market share in the smartphone industry plunge in the second quarter from a year earlier, data showed Wednesday, dented by the rise of Chinese players vying with low-end models.

According to a new IDC report published late yesterday, Samsung's sales plunged "despite having one of the largest smartphone portfolios of all OEMs. To maintain its position at the top, Samsung will need to focus on building momentum in markets dominated by local brands." 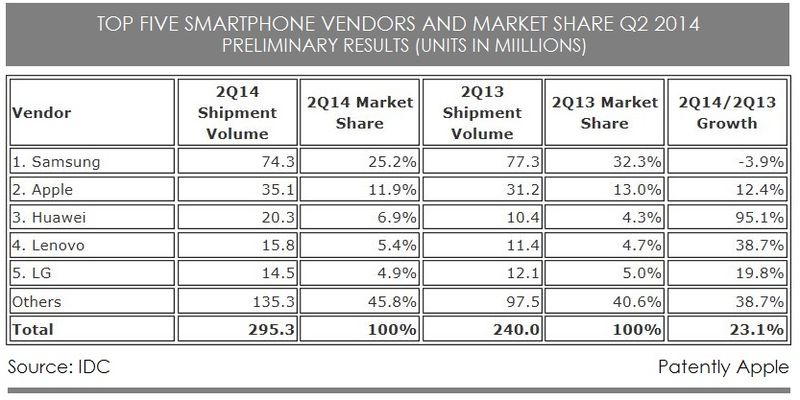 IDC further noted in their report that "Apple's second quarter is always its seasonal low of the year, but even more so this time in advance of the iPhone 6, with consumers holding their collective breath for the long-awaited bigger screens. Apple enjoyed continued success in the BRIC markets, a good sign that it is building its footprint in emerging markets."

More specifically, Cook noted that in the BRIC countries (Brazil, China, India, Russia, and South Africa) they enjoyed very high growth in the 50-60% range. On July 22 Apple announced that it enjoyed another record quarter with strong iPhone sales in the June quarter at 35.2 million units.

Going forward, Apple will have to raise the bar both in style and features to stay ahead of the pack and it appears that Apple's iPhone 6 may be able to pull it off.

Yet Melissa Chau, Senior Research Manager with IDC's Worldwide Quarterly Mobile Phone Tracker cautions that "As the death of the feature phone approaches more rapidly than before, it is the Chinese vendors that are ready to usher emerging market consumers into smartphones," due to lower pricing and better value.

That cautionary note however is more likely aimed at Samsung considering that their most recent quarter suffered so badly. It's the Android market that will now begin eating their own.

The highest jump in market share year over year surprisingly came from Huawei, at a whopping 95.1%. According to a recent Reuters report, 80% of Huawei sales are in the low-end of the smartphone market which would be putting pressure on Samsung, not Apple.

What IDC didn't report is that Samsung's profits were down by 24% year over year due to slowing smartphone sales, according to preliminary data. Samsung's full quarterly report will be published tomorrow. Earlier this month we also pointed out that Samsung had cut back their Galaxy S5 orders for Q3, as inventory has to be worked off.