Nearly 50% of UK's Web Traffic is generated by iPhones Alone

Yesterday we reported that a new Kantar smartphone study found that Apple's iPhone 5S and 5C were the top selling smartphones in Britain with Samsung's Galaxy S5 a distant third. Today, in a new study published by Chitika, we're able to see that Britain's iPhone users account for close to 50% of the country's web traffic.

Similar to what we've observed in the North American marketplace, UK-based Apple users generate the greatest share of that nation's smartphone Web traffic. As would be expected in a largely mature market, there has been relatively little volatility in the UK smartphone usage environment from a brand perspective over the past six months. 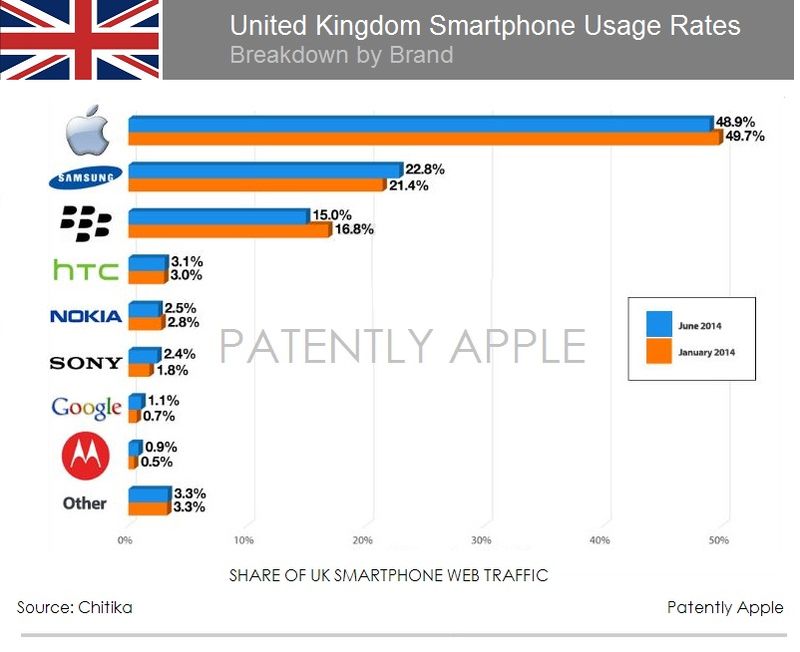 With one or more new iPhone models on the horizon for this fall, Chitika notes that "it's highly probable that Apple will retain its near-fifty percent usage share at year's end."

Once again another study shows us that Apple's users love their iPhones and are the most active users with 49.7 of web traffic. It means more app downloads, staying on top of the news around the world, at work and with their friends on social networks.

Samsung's web traffic amongst their plethora of smartphone models only accounted for 22.8% of UK web traffic making them a distant second. Surprisingly BlackBerry clocked in at third spot with 16.8% which was more than HTC, Nokia, Sony, Google and Motorola combined.

To quantify this study, Chitika Insights analyzed millions of UK smartphone-based online ad impressions generated within the Chitika Ad Network from June 16 through 22, 2014. The historical data were drawn from impressions observed from January 22 through 28, 2014. The results were then graphed alongside each other for comparative purposes.