On July 17, 2014, the US Patent & Trademark Office published a patent application from Apple titled "Infrared Sensors for Electronic Devices." This is a new application and not one that is a continuation patent. I say this because the iPhone having infrared sensors really isn't new. The feature that shuts off the iPhone's touchscreen when a user's ear touches the display isn't new. So what is new? What's new in this filing is that Apple wants to combine sensors and add new ones like a bolometer and a new dimension to their existing infrared sensor so that it could measure blackbody light. This will better measure the temperature of external objects such as a user's head or hand. This will provide consumers with the ability to use new "motion commands" that don't require touching the display. And considering that the invention could be used in conjunction with "portable devices such as wrist-watch devices, pendant devices, or other wearable or miniature devices," motion commands to control various features on an iWatch would be rather cool.

In Apple's patent FIG. 5 shown below we're able to see a detector 38B (i.e., the bolometer in this example) which may detect blackbody radiation in the form of infrared light and may use this information to determine the temperature of external object 52. The detected blackbody light is preferably distinguishable from ambient light due to the relatively long wavelength of light (e.g., 3-15 microns) that is emitted from the external object. 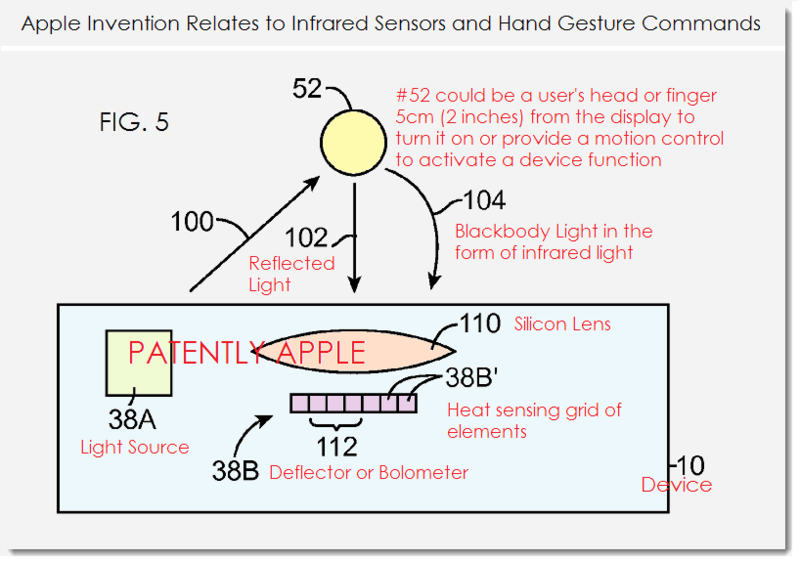 If desired, detector 38B may be an infrared sensor array (e.g., a bolometer formed from a grid of heat sensor elements such as detector 38B of FIG. 5, which has a one-dimensional or two-dimensional array of heat sensing elements 38B'). The Lens #110 may be formed from one or more individual lenses. To ensure that heat measurements can be made using sensor 38B, the lens may be formed from a material that is transparent to infrared light with a wavelength of 3-15 microns such as silicon.

Apple notes that the key here is "when multiple heat sensor elements 38B' of sensor 38B are available to the control circuitry, sensor 38B may be used in detecting motion in object #52 relative to the device (#10). Sensor 38B may, for example, detect motion of the object when the object is a user's hand being used to supply the device with a hand gesture command (as an example)." 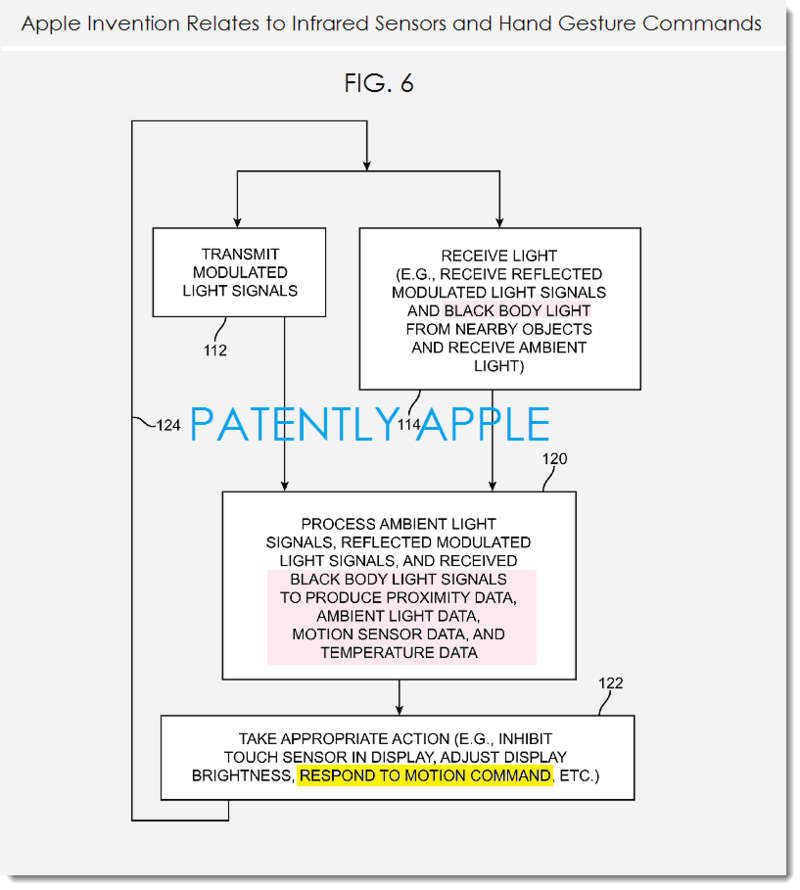 The technology could technically allow an iWatch-like device to be turned on when the user brings it closer to their face to view the interface and then turn it off as soon as the user lowers their arm away from their face. A user wouldn't have to go through the tedious task of turning it on or off via the Home Button.

Apple credits their Senior Silicon Sensing Engineer Matthew Last Henry Yang and as the inventors of patent application 20140197317 which was originally filed in Q1 2013. Considering that this is a patent application, the timing of such a product to market is unknown at this time.