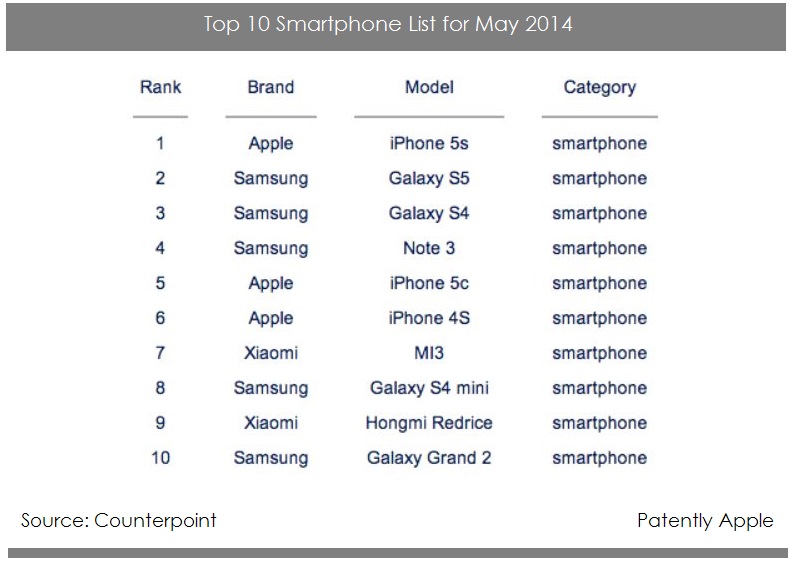 Counterpoint reports that in their channel survey across 35 countries, "Apple's iPhone 5s continues to be the bestselling phone in the world, a spot that many expected to be taken by Samsung's Galaxy S 5. The highly anticipated Galaxy S5 comes in at second place but still quite a distant number two in terms of (sell through) unit sales." Yes, saying it's a distant number two is just a polite way of saying that the iPhone 5S really crushed the Galaxy S5.

The later point was conveniently omitted in the Korean report. In fact, at the bottom of the original Counterpoint statistics they actually note that their stats are based on "mobile phone sales only (not shipments)." Without the usual shipment trickery, it's Apple's iPhone 5S on top. Finally, a research firm that reports the numbers right!

An additional statistics that was quickly eveident  in Countpoint's report is that "There are now 3 phablets in the top 10 list which reflects the ongoing trend of larger displays. almost 40% of the smartphones sold in May were phablets according to Counterpoint’s channel research across 35 countries." Counterpoint further notes that "If Apple comes out with a phablet later this year it will instantly become a hit and top the list of phablets within two months of availability."

Whether Apple delivers their 5.5 inch iPhone later this fall or in early 2015, it's clear that their entry into the phablet market will likely impact Samsung's Note smartphone sales, unless Samsung strikes back with a new smartphone twist like a dual display model.

In other interesting stats from Counterpoint shown below, we're able to get a peek at China's top 10 smartphone list for April to give a sense of where Apple's iPhone models actually rank against some very aggressive local smartphone OEMs.

Was Apple's iPhone 5S number one in China? No it wasn't, it came in third with their economical iPhone 4S taking second spot. Xiaomi's Redmi took top spot and for good reason. The Redmi has a decent set of features like a 4.7 inch IPS display today, along with a quad core Snapdragon chipset and dual SIM for $135 US. That's a tough price to compete with, that's for sure, and one that Apple is never going to challenge. Yet despite price, Apple's iPhone 4S and 5S were able to take the country's second and third spots respectively. Apparently a quality smartphone experience is still appreciated by many consumers even in an economically challenged country like China. 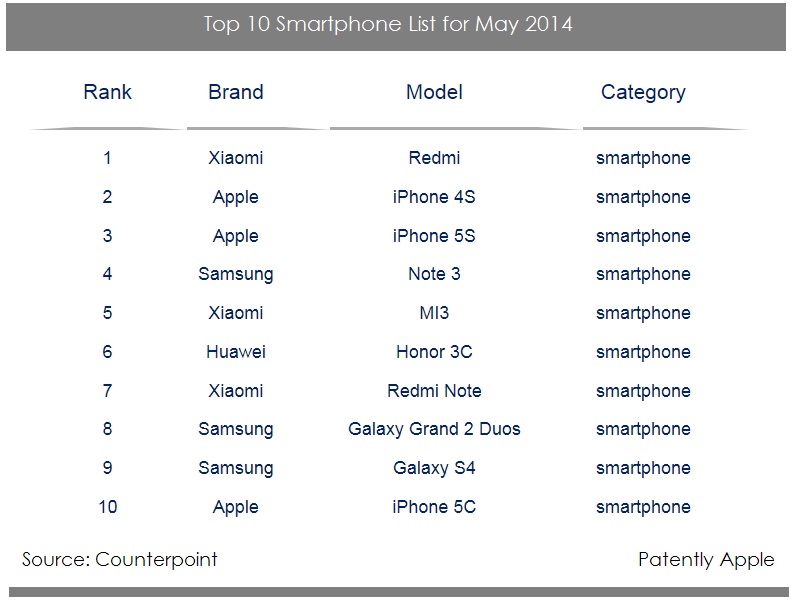 Considering that Samsung's Galaxy S5 was in China for April, it's interesting to see that it didn't even make the top 10 smartphone list during its most important launch month: Ouch.

Where was Samsung's Galaxy S4 on this list? It came in ninth barely beating out Apple's 5C. I guess Samsung's poorly handled battery disasters cost them dearly in bad PR. To the dog house they went.

For the time being, Apple is doing fairly well against their number one rival in China and around the world, to the surprise of both the Korean Press and China's own Research firm, Counterpoint. Though for Apple fans, it's just music to their ears.

About Making Comments on our Site: Patently Apple reserves the right to post, dismiss or edit any comments. Comments are reviewed daily from 4am to 7pm PST and sporadically over the weekend. Statistical Sources: Counterpoint