Apple Wins a Patent for a Wristwatch Branded iTime 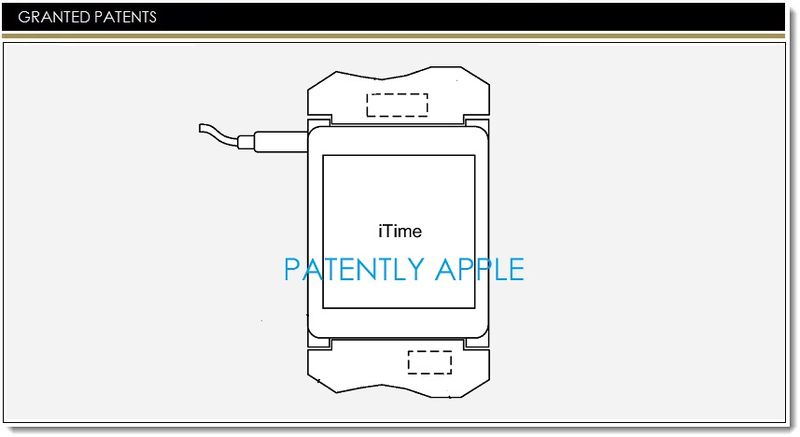 Out of nowhere comes the granted patent surprise of the year. Apple has been granted a patent for iTime, the name they provided for a wristwatch. It's very different from Apple's first wrist-computer or iWatch in every way. It's simpler and more watch-like. Apple notes that it will work with gestures and specialized push notifications and alerts. Whether this is a head-fake or the real thing is unknown at this time.

Apple Wins a Patent for a Wristwatch

The invention may be implemented in numerous ways, including, but not limited to, a system, device, apparatus or method.

As an electronic wristband to be worn on a wrist of a user, one embodiment of the invention can, for example, include at least a central portion and at least one band portion.

In Apple's patent FIG. 1 noted below we're able to see a perspective view of an electronic wristband or smartwatch. 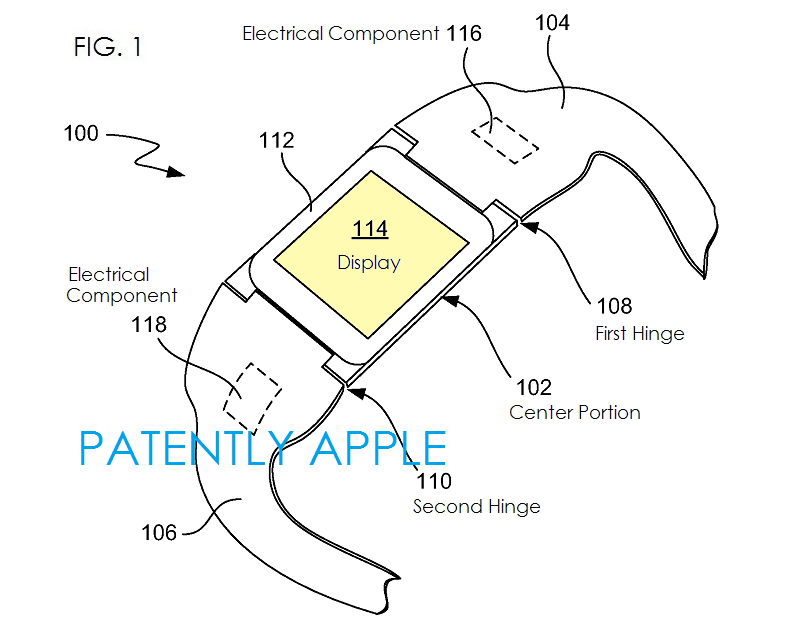 Apple notes that the center portion, noted as patent point #102 above, can be formed of various different materials. For example, the material can include any one or more of rubber, silicone, plastic, Mylar and/or vinyl.

Apple's patent FIG. 2 noted below is a front view of the smartwatch or electronic wristband. In one embodiment, the center portion can be configured to receive a mobile electronic device. In theory, Apple could sell different interchangeable components. One removable component could be health-centric while another for general computing. Who knows what else Apple may be dreaming up.

Apple notes that the changeable component, noted as #208 below, can be removably secured to the center portion by one or more methods including detents, connectors, recesses, magnets, hook and loop materials, latches, etc.

In another embodiment, the mobile electronic device can be integral with the center portion. In either case, the mobile electronic device can include a display (#210) for output of information to a user. In one implementation, the display can be a touch-sensitive display that can not only output information to a user but can also receive inputs from the user.

The electronic wristband can also include an audio receptacle for receiving an audio jack (#212). The audio jack can be associated with a speaker and/or microphone, such as an earphone or headset, for audio output or pickup. 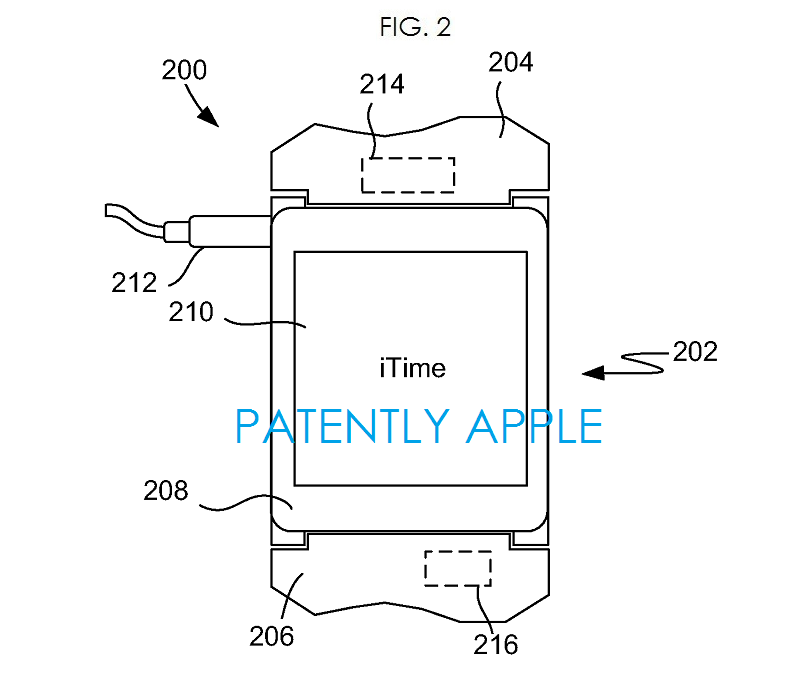 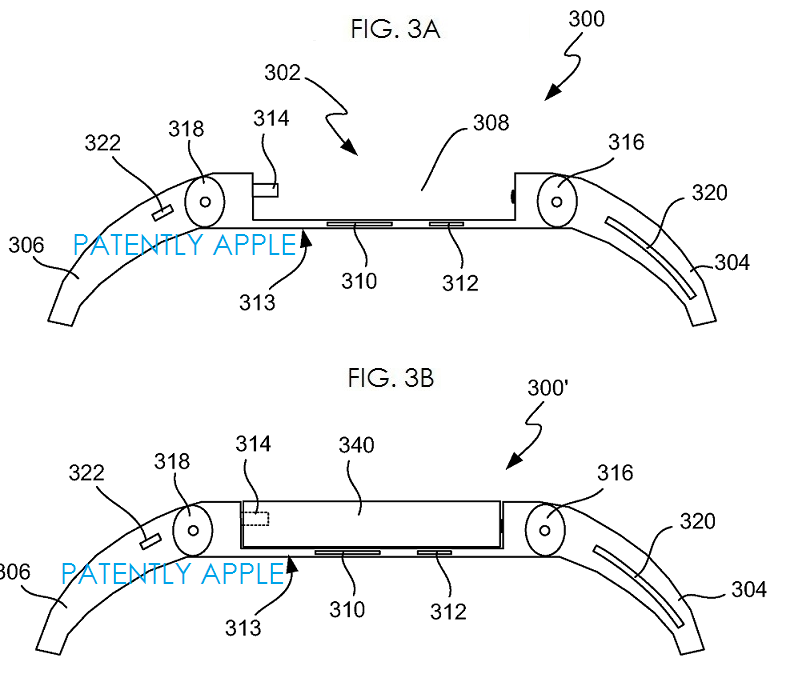 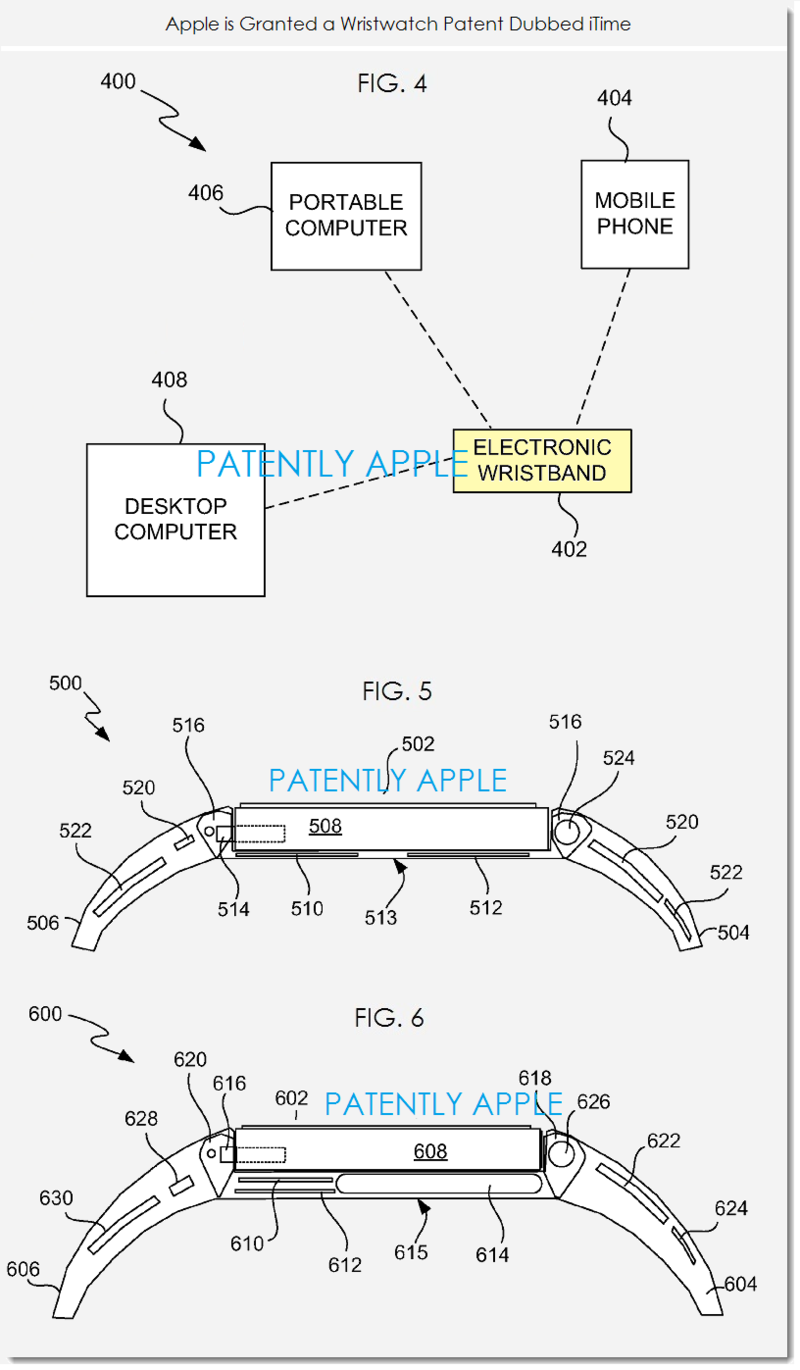 Apple further notes that an incoming phone call, a text message, a social network post, weather alerts, stock alerts, calendar alters or a news feed directed to the user's iPhone will be pushed to the smartwatch.

Besides information exchange, an electronic wristband will be able to be used to provide remote user controls to a user. For example, the smartwatch will allow the user to control their music as if it were an iPod.

It Alert's the user if the Watch is out of Range

Apple describes another feature that's interesting in that the smartwatch will be able to  alert the user if the watch is going out of range. For  example, if you took off your smartwatch to wash your hands and forgot to put the watch back on, when leaving the washroom area, your iPhone would then notifiy you that your watch is no longer in range. In effect, telling you that you left your watch somewhere - in this case the washroom.That's pretty cool.

In Apple's patent FIG. 5 noted above we're able to see is a cross-sectional side view of Apple's iTime smartwatch and some of its components. Notably, we're able to see a Bluetooth antenna (#520) and the near-field antenna (#522). There's also an audio port (#524), an accelerometer (#524) and a Global Positioning System (GPS) antenna (#526). The accelerometer and the GPS antenna can be electrically coupled to the portable electronic device via the connector.

Another aspect of Apple's invention pertains to using the smartwatch with new wrist or arm gestures. For example, once a notification request is received on the smartwatch, the user can end the notification with a wrist gesture. The electronic wristband can also seek a response to a notification. In one embodiment, the smarwatch can monitor one or more sensors to detect a user gesture with the user's arm or wrist. For example, the sensors can include an accelerometer and/or gyroscope. Typically, the sensors are digital sensors.

Apple credits Albert Golko, Mathias Schmidt and Felix Alvarez as the inventors of granted patent 8,787,006 which was filed for in July 2011 and granted to Apple by USPTO today.

Side Note: According to a new report from market research firm DisplaySearch, global smartwatch shipments will likely to reach 8.85 million units this year and 32.57 million units next year. That's pathetically low but understandable without an Apple smartwatch model on the market. However, should Apple decide to enter the ring, I strongly suspect that Apple would be able to crush that forecast. Time will tell.